On the outskirts of many large, expensive, complicated public works projects, there are often examples of easy little things we could do to improve our cities for very little money. A couple blocks from my humble apartment, the City of Minneapolis is moving ahead with a rebuild of the Hennepin/Lyndale bottleneck that looks to be a real improvementfor pedestrians, cyclists, and transit users. Just south of that, though, is another thing we ought to do something about.

There is a small (one long block!) but glaring gap in cyclability on Lyndale Avenue in South Minneapolis between the Hennepin/Lyndale bottleneck and Franklin Avenue. The cycletrack that begins at Loring Park and travels along the east side of the bottleneck abruptly ends right after clearing the last freeway onramp.

Cyclists trying to head south through this area are confronted with three options:

1.) Go up and over the bridge to be connected to the Bryant Avenue Bike Boulevard

The Bryant Avenue Bike Boulevard, a nice facility, is two blocks to the west of Lyndale Avenue. It wouldn’t be super out of the way if you were biking north from, say, Uptown, taking Bryant and crossing the bridge to get onto the existing cycletrack to continue towards downtown. It is, unfortunately, pretty out of the way and a pain if you’re doing just about any southbound trip. Google Maps gives you these options to get from Hennepin Avenue United Methodist Church to Rudolph’s on a bike. I don’t get the sense that you’re encouraged to bike in the freeway onramp-like stretch of Lyndale that emerges out of the bottlebeck; your remaining options are cockamamie. 2.) Ride on the sidewalk 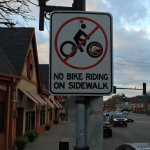 In theory, you’re not supposed to ride on the sidewalk here, per signage on the sidewalk in front of Rudolph’s. In the summer, when they have outdoor seating, it’s pretty tight. Anecdotally, this appears to be the most common response to the gap. I walked through it for a couple minutes taking pictures on a Tuesday and three people rode down the sidewalk. I don’t generally bike through this area (for obvious reasons) but I’ve done it several times on the sidewalk. It’s not a very big sidewalk and, as you can see in the middle picture, there are obstacles and pedestrians to contend with.

3.) Ride into oncoming traffic in the street

This is a thing that I’ve seen! Don’t do this.

What we should do, though, is just take out that whole lane of parking along the east side of Lyndale and extend the cycletrack to the Franklin intersection. We could do something real basic tomorrow–adjust some signage, put up bollards, and stripe a bit.

There aren’t too many parking spots–probably seven or so spaces if everyone is parked efficiently. There’s a Y-intersection with Ridgewood Avenue in the middle of the block. Presumably, the people who live in those two apartment buildings will not be happy about losing the handful of parking spaces that this strip provides. But, doing some math, there are ten units in the north building and eleven units in the south building, and it does look like there are pretty close to 21 surface parking stalls in the lot behind the two buildings. And, actually, on Google Maps there are but two cars parked along the whole strip. Walking along it yesterday, there were three cars parked there. Rudolph’s has a parking arrangement with a surface lot kitty corner from their restaurant.

This whole area is itching for redevelopment, as we saw with the ultimately ill-fated Franklin & Lyndale project that appears to be on hold for now. But at the moment, it’s not a particularly enjoyable intersection to use as a pedestrian, cyclist, or transit user. Lyndale Avenue from the bottleneck to Lake Street is a very large street. Trivia: Along with White Sands Missile Range in New Mexico and Washington Avenue in Minneapolis, Lyndale Avenue was one of the designated emergency landing sites for the Space Shuttle. 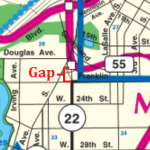 It’s a county road! And so changing it is a little harder than changing, say, Bryant Avenue. However! According to the county road map, it would appear that this little chunk of Lyndale is actually not a county road, their jurisdiction starts south of Franklin.

So, this would be pretty easy to fix, right? We could stripe it in a weekend! I would volunteer. I don’t often bike through this area, but I do walk through it every few days. I would probably bike through it more often if it was more accessible, and I bet lots of other people would too. We could throw some planters and other nice things on there. Long-term, we should extend the curb out from the buildings and do bumpouts at Franklin & Lyndale. There could be trees! That perpetually vacant/sad retail space between Ridgewood Avenue and the apartment buildings would be much more attractive. The outdoor diners at Rudolph’s would probably have a better experience. That, though, costs actual money; we could do almost as well with some paint and some spunk.