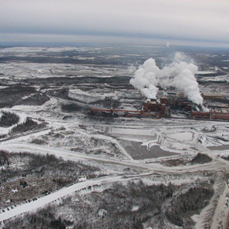 Taconite plants are among the largest energy users in Minnesota.

The Minnesota omnibus energy bill  HF 956 / Companion SF 901 has passed the Minnesota House and Senate and is currently in conference committee. The bills would establish a solar energy requirement, 4% in the House version and 1% in the Senate, to be met by the year 2025. This is a watered down version of a 10% requirement that was backed by a coalition of industrial and environmental groups calling itself the “Clean Energy and Jobs” campaign.

Early on in the legislative process, public municipalities and rural cooperative energy utilities were exempted from the solar mandate. Then the Iron Range delegation stepped into the picture, adding language to both the House and Senate bills that exempts the taconite and timber industries from any rate increase attributed to a solar mandate.

By carving out an exemption for the global mining industry, these bills exempt one of the largest energy users in the state. There are six operating taconite plants on the Iron Range, served by Allete’s Minnesota Power. Allete estimates that new mining projects, including the proposed  PolyMet copper-nickel mine and Essar Steel Ltd’s proposed electric arc steel facility, would require up to 400 megawatts of new electric service. Mining company exemption from the solar standard is a subsidy to the mining industry. The industries who are depleting our resources, degrading our environment, and using the most energy should be held to a higher standard, not a lower one.

As quoted in Jonathan Avise’s article” House green lights new solar energy standard,” Twin Cities Daily Planet, May 8, 2013, not every legislator is in favor of the bill. “Aimed squarely at aiding the economic engines of the state’s northeastern Iron Range, the amendments drew the ire of Republicans who accused the DFL of handing a “carve-out” to that region to win votes. Rep. Michael Beard (R-Shakopee) …said the amendment unfairly singled-out one area of the state for lower energy rates. Garofalo said it laid bare that the new standards were bad for the state as a whole.”

According to an article in the Star Tribune, “Battle over Minnesota solar mandate shifts to the Senate,” May 8, 2013, Republican legislators said the customer-funded subsidies will shift the costs of solar to customers who can’t afford to install rooftop solar arrays. “You are taking money from poor people and giving it to rich people,” said Rep. Pat Garofalo, R-Farmington.

While seeking to benefit manufacturers Silicon Energy in Mt. Iron and TenKsolar in Bloomington, the bill neglects to notice the overall footprint of solar panels. The technology itself is based upon metal mining that requires huge amounts of energy. Since solar cells depend on rare metals in their production, the cells should be used sparingly and in applications that are most durable. Solar technology does not come carbon-free and should be part of an integrated strategy that includes using less power.

The energy  bills exempt approximately one third of energy users. Minnesota Power experts estimate that a  4 percent solar mandate would have raised electric bills for taconite plants 10 to 15 percent. (Duluth News Tribune, “Minnesota pushes solar power; mines, mills off the hook,” May 13, 2013). How much will energy costs increase for the remaining two-thirds of us who are not exempted?

Call your legislators in opposition to carve-outs in the Minnesota energy bill, and ask them to take a broader look at ways that Minnesota can reduce energy consumption and carve out more sustainable life styles.  Contact Governor Dayton at 651-201-3400 or 800-657-3717 or at the webform http://mn.gov/governor/contact-us/form/.  It’s unfair that some Minnesota ratepayers will pay the costs of a solar energy mandate, while others are exempt.