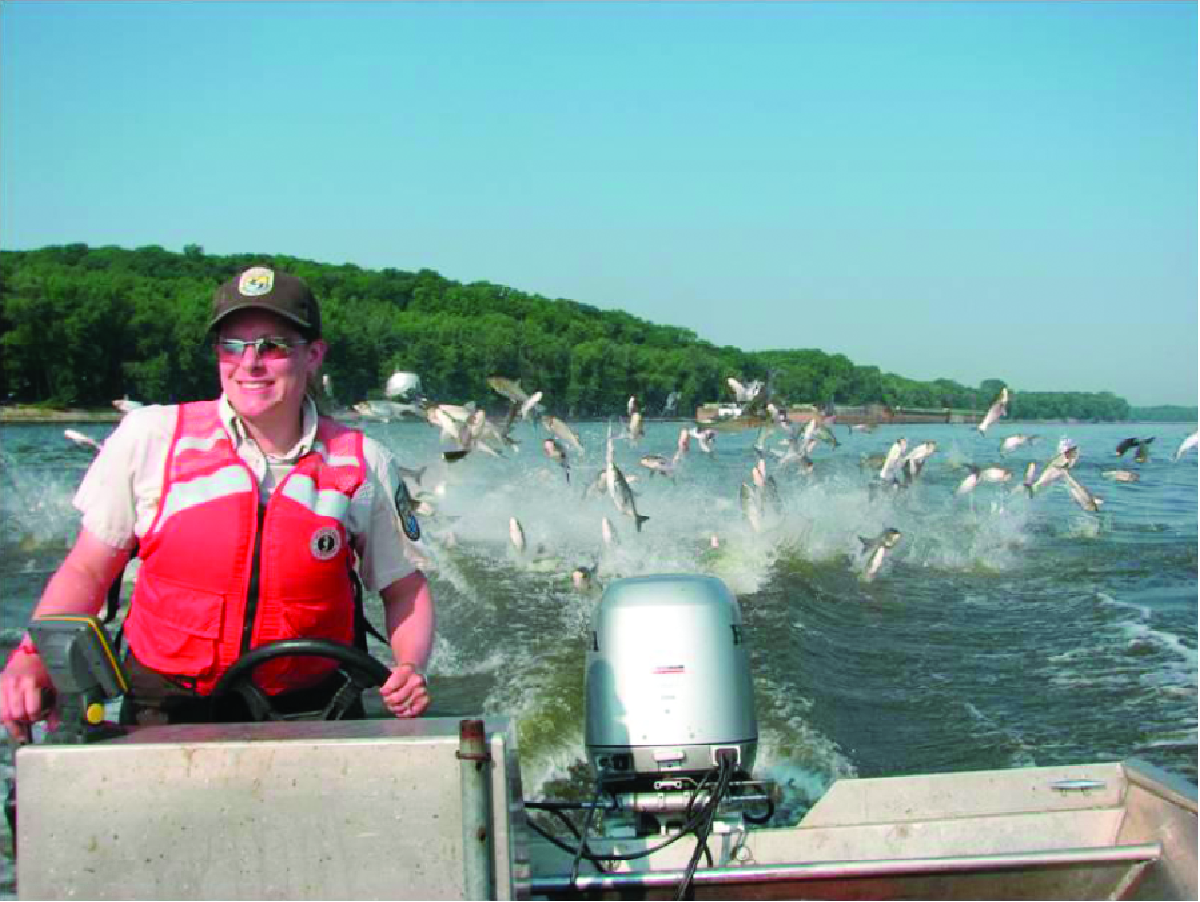 This U.S. Fish and Wildlife photo from the Illinois River shows silver carp jumping when startled. The flying fish can cause accidents, and the various types of carp starve out native species by eating all their food.

Some fish don’t play well with others, and one of them—potentially one single fish— might soon close the gate on the entire upper Mississippi River (north of St. Anthony Falls).

The fish itself won’t do the closing, and people (and other fish) will still be able to use the upper river.

But if Asian carp continue their apparent northward migration, there’s a good chance the Upper St. Anthony Falls lock will be closed, and that means no boats can pass that point in either direction. And if an act that’s currently before the U.S. Congress passes, federal officials will be required to close the Upper St. Anthony lock if a single Asian carp is caught in certain places in the Mississippi River.

The silver carp are large enough and jump aggressively enough to injure boaters.

Officials are concentrating on the upper St. Anthony Falls lock and dam, they say, because it’s one of three on the Mississippi that allow upstream fish migration only if the lock is actually open. In other words, if they don’t open the lock, no downstream fish can move past it and invade upstream waters.

One of the lock’s most frequent users, the Minneapolis Queen excursion boat, won’t use the lock anymore. Its owners have agreed to re-route trips to reduce the number of lock openings.

It takes an act of Congress to authorize the Secretary of the Army to close a Mississippi River lock. In the U.S. Senate, Senators Amy Klobuchar and Al Franken have introduced legislation; in the U.S. House of Representatives, Representatives Keith Ellison, Erik Paulsen and Tim Walz have introduced it. The legislation authorizes the Secretary of the Army to close the lock if the secretary determines it’s needed, based on the research from a study the legislation mandates. The legislation also requires the secretary to close the lock if one or more live adult Asian carp is captured north of Hastings, or if one or more juvenile Asian carp are captured north of Alma, Wis.

Both bills have been referred to committee.

According to John Anfinson, Mississippi National River and Recreation Area resource management chief for the National Park Service, the Asian carp eat massive amounts of the vegetation that sustains the rest of the fish species. “They have the ability to out-compete our native species,” Anfinson said. “They could starve out” the native fish.

DNA tests conducted in March indicate that the silver carp could be in Twin Cities waters now. Bighead carp were found at the mouth of the St. Croix River and in the Mississippi River at Winona. Grass carp were found at Winona and are probably well established as far north as Red Wing. The black carp are the farthest away, in southeastern Iowa.

And all that could mean trouble very soon. “These fish are notoriously hard to catch,” he said, and “all of a sudden, in one year, populations just explode.”

Anfinson said 80 percent of the Upper St. Anthony Falls lock use is recreational, and if the lock stays open, he hopes to find ways to minimize lock use, such as requiring multiple small boats to go through the lock at the same time.

That’s not so easy with the commercial users, he said. “There’s not a lot of wiggle room with the barges. You might be able to send two barges through at one time.”

Northern Metals, which is located on the west side of the Mississippi River just south of the Lowry Avenue Bridge, sends about 15 barges per month down river, eight or nine months per year, according to its president, Stephen Ettinger. “There’s no more efficient means of transportation” than barges, he said, with each barge able to carry about 1,500 tons of cargo. Semi trucks can carry about 20 tons, he said.

If the lock is closed, “it wouldn’t change anything fundamentally,” he said. “The only change would be that instead of loading barges at our [Minneapolis] facility, we would be trucking our materials to St. Paul” for loading onto barges there. That would mean about 1,100 more truck trips per month, “right through the I-94 corridor,” he said.

Ettinger said he thinks there’s political pressure to concentrate on the St. Anthony Falls lock, from people who advocate for recreational uses on the upper Mississippi. “I would rather have seen them consider altering the Coon Rapids Dam,” he said. “It’s above the navigation channel, and officials could keep the St. Anthony Falls area “open for recreational boating.”

“Eventually, when you have invasive species—I hate to say it—but I think it’s just a matter of time until they find their way into the inland waterways.

“I think [officials] want to slow them down,” he said, “and I hope it’s effective.”