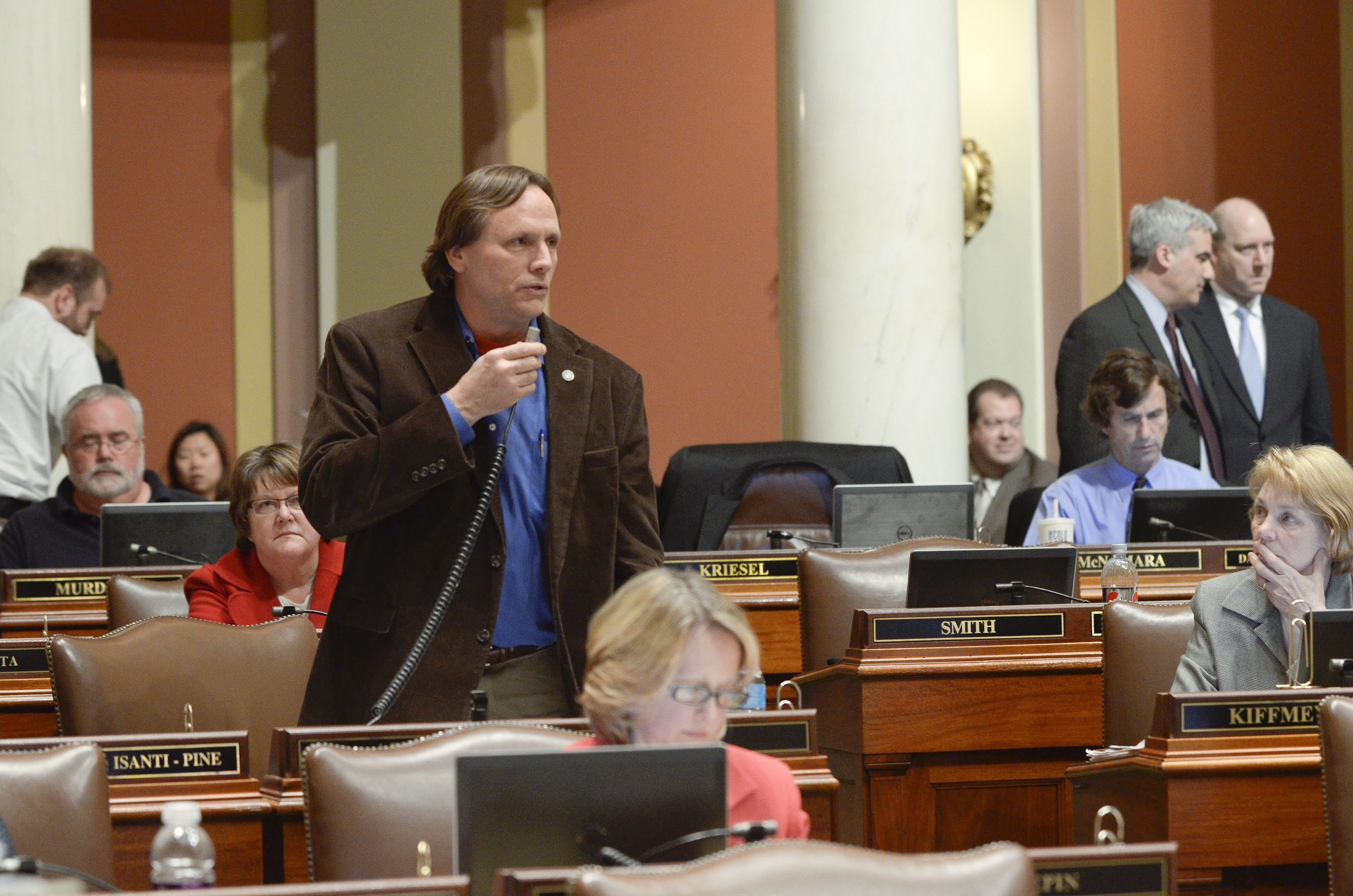 State health care spending hinges on a couple of state and federal rulings, making the omnibus health and human services finance bill, HF2294, a moving target even as it was being discussed on the House floor with a stack of amendments awaiting their fate.

Last week was pivotal for bill sponsors, especially after a Ramsey County District Court judge upheld the state’s decision to help balance the state budget last year by paying Minnesotans who are employed as personal care assistants for family members 20 percent less than their non-related counterparts.

The cut was temporarily blocked by the court and the Department of Human Services put off spending the savings, pending the civil lawsuit. Now the bill’s sponsor, Rep. Jim Abeler (R-Anoka), says he would like to negotiate less of a reduction.

“I’d like to save that money and make it only a 10 percent reduction, but I don’t know that I can because of the threat of an appeal,” he said.

Another ruling, this one at the federal level, will decide whether the state receives a federal waiver to pay lower rates for continuing care services, such as group homes and assisted living facilities. A previous Legislature tried to lower rates in 2009, but the cuts were not permitted under the American Recovery and Reinvestment Act of 2009. The state then applied for a waiver, expecting to save

$35 million; but the cuts were delayed one year. Human Services Commissioner Lucinda Jesson went to Washington, D.C. this week seeking to expedite the waiver. If the waiver is not granted by the end of the fiscal year 2012, HF2294 would authorize a 1.67 percent rate cut.

Rulings aside, Abeler called the bill’s “marquee accomplishment of the session” a provision that would relax the corporate adult foster care law regarding Community Alternatives for Disabled Individuals.

Currently, individuals on CADI waivers are limited to living in four-bed housing facilities. The bill would allow them to comprise up to 25 percent of a multi-family complex.

The goal is to encourage more people under age 65 who could live more independently to do so, and at a daily savings up to $100 per individual, according to Abeler.

Overall, the omnibus bill assumes a $301,000 cost in fiscal year 2012, but those costs would be paid for through savings in 2013 by closing more corporate foster care beds.

“What we’re doing here … is pushing dates out to make the fiscal note go away,” said Rep. Tina Liebling (DFL-Rochester) on the House floor March 29. She called it an “accounting trick.”

Other 2013 cost provisions would be paid for from nearly $4 million in federal funds available for programs for families with children.

At press time, the bill was being discussed on the House floor. If passed, it would go to the Senate, where Sen. David Hann (R-Eden Prairie) is the sponsor.

Another section of the bill aims to protect families living in poor conditions.

Landlords of tenants who are Minnesota Family Investment Program recipients with drug offenses are paid directly as vendors, but these payments would stop if the rental property is deemed uninhabitable. The landlord also would be prohibited from evicting the tenant.

In response to more people moving out of corporate foster care and into smaller care facilities, providers have been instructed to close a bed permanently when a person leaves the home. The bill would grant more flexibility in deciding where in the state a bed should close, so that providers can be geographically responsive to where there is the most need.

Rep. Diane Loeffler (DFL-Mpls) successfully amended the bill in the House Health and Human Services Finance Committee so that when the commissioners of health and human services prepare a biennial report to the Legislature regarding long-term care services for the elderly, they must consider a policy to give a person leaving a facility up to 60 days to go back if the more independent living arrangement does not work out.

The Minnesota Visible Child work group would be created to identify and recommend issues that should be addressed in a statewide plan to improve the well-being of children who are or have been homeless. Members would include two state representatives, two senators, and about 12 other community child advocates. A report would be due to the Legislature by Dec. 15, 2012. A list of recommendations would also be submitted to the Children’s Cabinet, a new state committee with members from three state agencies.

At the request of Rep. Diane Anderson (R-Eagan), the committee also approved appropriating a one-time $500,000 for long-term homeless support service grants for low-income families. The funds would come from the Temporary Assistance for Needy Families fund in 2013.

Teen parents trying to finish high school and who have licensed child care would be granted more absentee days before losing their day care assistance payments. Current law limits absentees from child care to 10 days per child, per year. That would increase to 25 days per child, but no more than 10 consecutive days, unless there is a medical reason for the child’s absence. Rep. Nora Slawik (DFL-Maplewood) said easing the law may help teen parents avoid unintended consequences, such as bringing a sick child to day care to avoid going over the limit or leaving the child in an unsafe place.

A controversial provision stems from HF2080, sponsored by Rep. Kurt Daudt (R-Crown), which would change where Electronic Benefit Transfer cards are used and add stiffer penalties for their misuse.

Card recipients would be restricted to purchases in Minnesota and contiguous states. Those found guilty of purchasing tobacco or alcoholic beverages with the card would be taken off the benefits one year for a first offense, two years for the second offense and permanently after the third offense.

Opponents said the proposed penalties would hurt children of the offenders. They also said not being able to use the card in other states while attending family events, seeking employment and similar types of uses is unfair and criminalizes the poor.

When a person is appealing denial of Social Security disability benefits, they may need to obtain copies of their medical records. Medical providers would no longer be allowed to charge a per page fee. Rather, a flat $10 fee could be charged. Individuals represented by a volunteer legal aid service would not be charged.

The bill also includes HF2276, sponsored by Rep. Mary Kiffmeyer (R-Big Lake), to require some providers of advanced diagnostic imaging services to be accredited by Aug. 1, 2013, from one of three national accreditation organizations: American College of Radiology, Intersocietal Accreditation Commission or the joint commission. Providers would need to prove annually to the commissioner of health that they are properly accredited.

Hospitals would no longer be required to submit information to the Leapfrog Group, which rates hospitals on patient safety measures. Rep. Joe Schomacker (R-Luverne) successfully offered the amendment. In committee testimony, hospital representatives said the reporting procedures have grown exponentially, resulting in higher administrative costs, and the public has other choices for receiving similar information.

Rep. Tom Huntley (DFL-Duluth) successfully offered an amendment so that the Department of Health would receive $563,000 in 2013 to add five licensed home care inspectors to help deplete a backlog of inspections. Funding would be drawn from the State Government Special Revenue Fund.

The Department of Health and the University of Minnesota would receive $200,000 to study the cultural aspects of autism spectrum disorders that are unique to the Somali community in Minnesota. Huntley said research has shown that Somali children in the U.S. and Norway are disproportionately afflicted with unexplained autism.

Another $79,000 would be used by the Health Department to study whether to allow for-profit health maintenance organizations to operate in Minnesota.