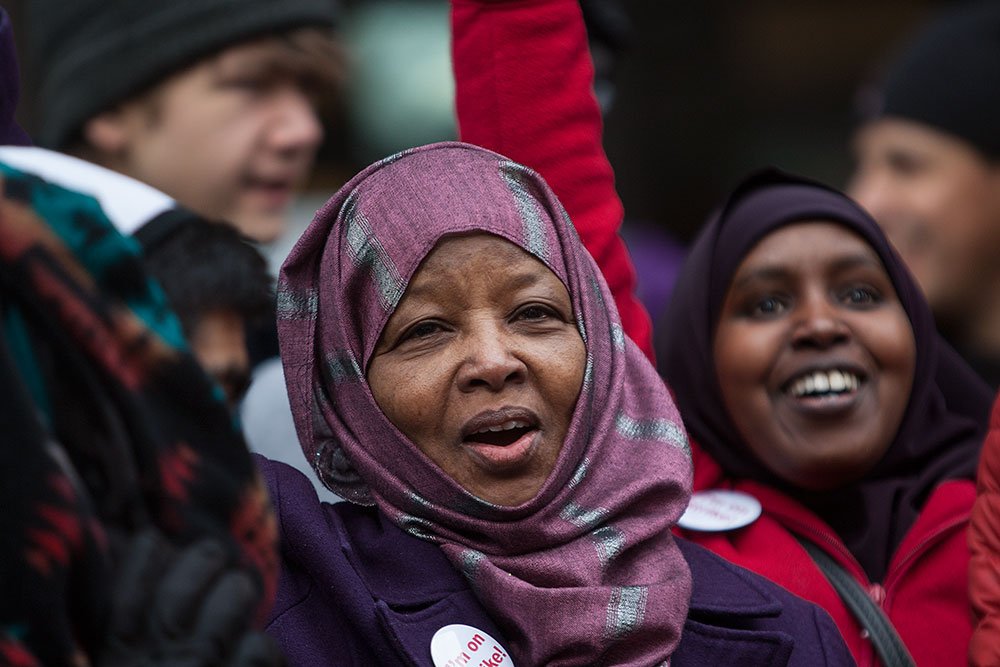 This Tuesday, March 1, is Super Tuesday. That means Minnesota, along with 11 other states and American Samoa, will hold presidential primaries or caucuses. However, the number of delegates Bernie, Hillary, Drumpf, Rubio, or whomever else, receive is not the only thing that will be decided on Tuesday. Minnesotans will have the chance to introduce resolutions, nominate candidates for state party office and shape their parties’ platforms.

Neighborhoods Organizing for Change (NOC) has been holding daily trainings to equip voters with the information and tools to effectively caucus. There is one last training Monday night. However, if you can’t make it, here is our guide on how to caucus and why you should caucus, especially if you are part of a community that is often excluded in political conversations. 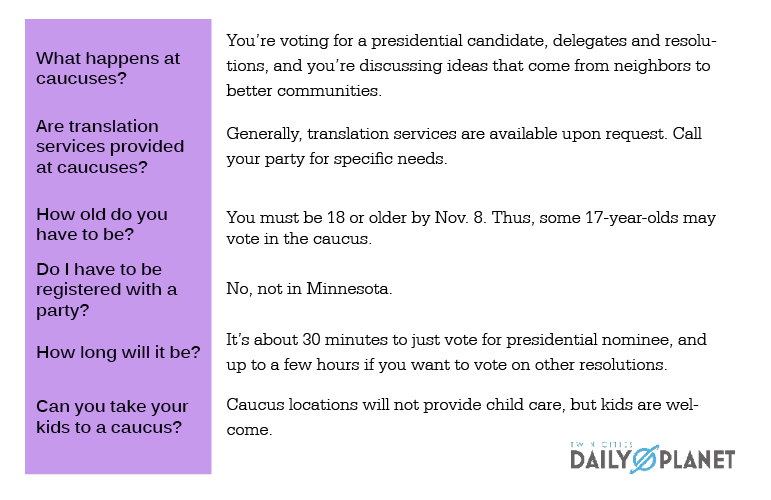 To find your caucus, use this handy precinct finder from the Secretary of State’s Office.

To write a resolution, you can find the form for the GOP here, and the DFL form here.

Now that you know where and how to caucus, why should you go?

Cristeta Boarini, Twin Cities Daily Planet editor: The first caucus I attended was in 2014 for the Rice County DFL. Without the big referendum questions or presidential election that boosted 2012 voter participation, 2014 marked the year Minnesota lost its place for the nation’s highest voter turnout, said Secretary of State Steve Simon.

Low voter turnout seemed inevitable when I saw the crowd at my 2014 caucus. Most of the attendees were over the age of 40, few were new to the caucus process and all were white.

In that middle school cafeteria, Sen. Al Franken cracked jokes, Rep. Tim Walz (a veteran and a history teacher) talked veterans’ benefits and education, and the delegates in the room presented resolutions on Social Security and job creation. In essence, they talked about things that mattered to them as white, middle-class, middle-aged DFLers.

Despite a rising population of communities of color moving to Rice County, none of the resolutions spoke to the 16.5 percent of the county that doesn’t identify as white.

They voted to create a party platform that would assert the status quo, not one that would bring people more access, make services more equitable or protect those among us who are most vulnerable. They’re not going to invite us to a party where they are already comfortable. We have to insert ourselves into the system to make it work for us.

Linda Her, executive director for Asian American Organizing Project: As an organizer who has done elections and campaign work, where we struggle in the Asian community is education. During off-year elections, there is no engagement by the parties with the Asian community. There’s no investment, even when the funds are there, but they choose to put them elsewhere. What could we actually do with the resources that they have if there was a shift in leadership?

Often, communities of color are left out of the conversations that lead up to elections, like the caucuses. That’s where a lot of the early discussions happen, that’s where the tone is set.

It’s important for people of color to be involved. Our votes count in November, but we’re not being courted by the parties to be part of the process sooner. We need stronger leadership for people that better reflect our population within the institutions of power.

We need to make sure our communities are equipped to shape policy and be active year-round, not just at elections.

Ashley Fairbanks, artist and activist: It isn’t enough for marginalized communities to only show up reactively. We spend a lot of time working to turn out people vote, or to show up when our elected bodies are doing things to negatively impact our communities. It’s important if we truly want to build power, that we involve ourselves much earlier in that process. We need to take up space in the political parties of our choice. We need to caucus to bring our issues as resolutions, and to get much more diverse delegates selected.

I personally don’t believe that politics are going to save us. As an Anishinaabe woman, I’ve learned that our government has never given us rights, only taken them away. That’s why I am involved in politics. I want to help prevent the government from doing us harm. This is why I think that all of us have a responsibility to vote. No matter how much we “don’t believe” in politics, they exist. And the consequences of not being involved are dire, especially for marginalized communities. Caucusing is the most democratic way we have of being involved. We can all bring resolutions. We all can become delegates. We can learn about how the party system works, and how we can run candidates.

For political change to actually occur, we need it to be from the bottom up. And that means we have to caucus.

Nicque Mabrey, community organizer with NOC: Caucus is is first step in putting power in democracy in Minnesota. And the traditional face of power aren’t people of color or low-income people, aren’t single mothers. These are the systems that make decisions about our lives. Caucuses for me, a poor woman of color from a low-income background, is urgent. We are talking about issues that impact our lives to the folks that want to make decisions in office. That’s the first step and it’s a pretty big deal.

The Peace Corps started as a resolution in caucuses in Minnesota. There’s nothing new about this. The process sounds kind of feel-good but we’re talking about concrete stuff that impacts our lives everyday. We say to our neighbors and political parties, this is what matters, that is a really a big deal.

There’s a social aspect that we aren’t talking about. It’s an opportunity to meet and connect with your neighborhood and connect about things we care about. Yes, we do this to assert political power, but also to connect.