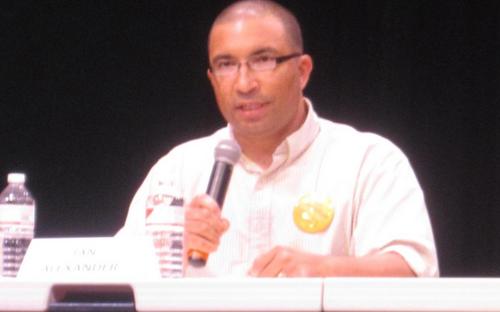 Four North Minneapolis candidates faced off in a public forum followed by karaoke at the Capri Theater on Saturday, September 7. About 90 audience members heard candidates respond to wide-ranging questions on everything from police-community relations to homelessness to the HERC garbage incinerator to youth policy. Economic empowerment was an overarching theme that the candidates often returned to in the forum, which was sponsored by Neighborhoods Organizing for Change (NOC) and moderated by community leader Sina Black.

With no DFL endorsement for the seat and incumbent Don Samuels running for mayor, the candidates are running hard and are eager to differentiate themselves from their opponents. Other than Severson’s repeated and rather pointed observation that he has lived in the 5th Ward his entire life, the candidates stuck to the issues and did not criticize each other. (Buckner is also a lifelong resident of the ward; Alexander moved to the ward after completing law school; Yang was born in a refugee camp in Thailand.)

And as for the karaoke? After more than 90 minutes of discussing issues, candidates helped the afternoon end on a light note, gamely participating in the karaoke part of the event. Buckner sang Journey’s “Don’t Stop Believin’; Severson sang a romantic duet with a high school friend; Yang sang Bounty Killer’s “Look Into My Eyes;” and Alexander recited a poem about door knocking in the 5th Ward to the accompaniment of a guitarist singing “Lean on Me.”