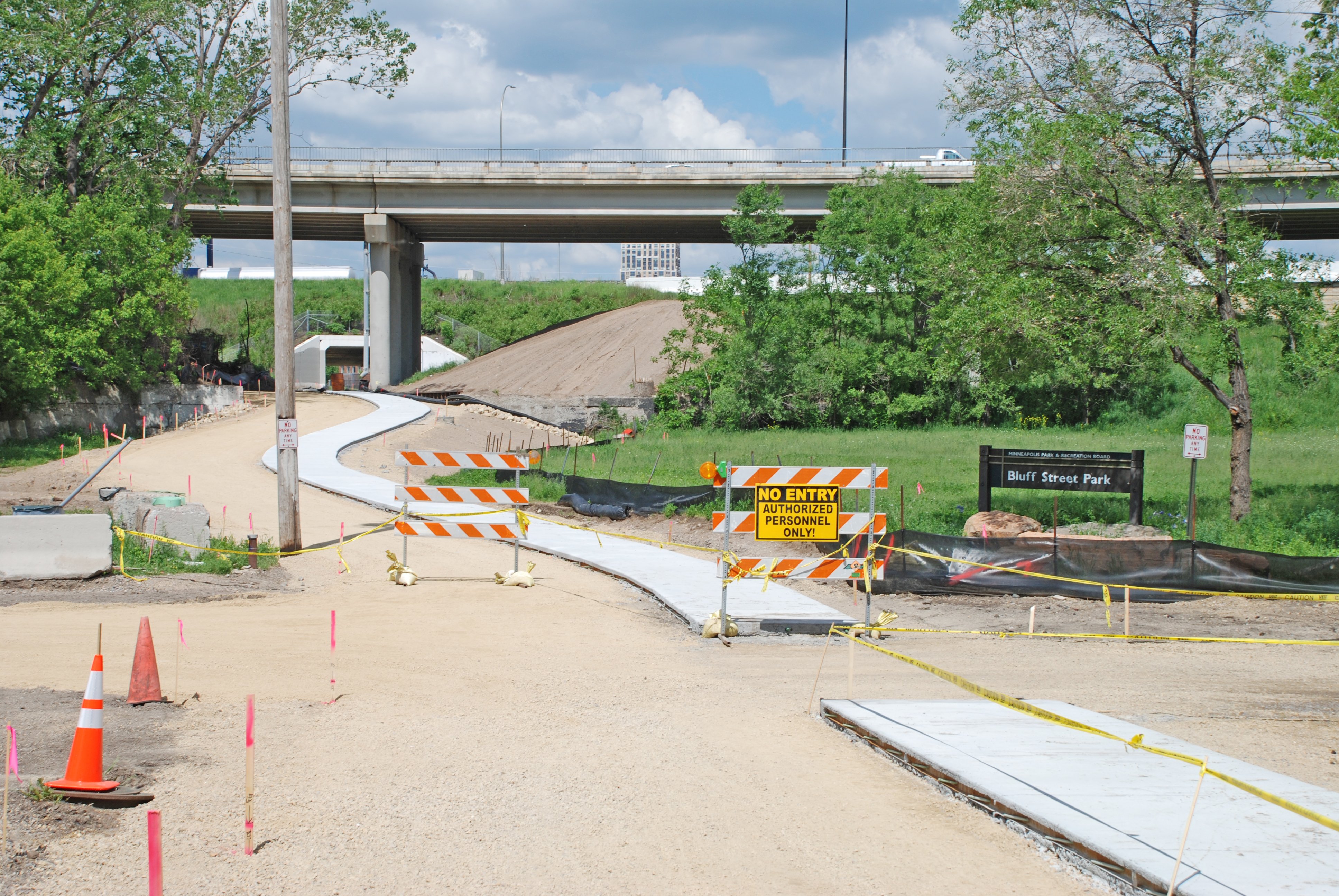 A bicycle and pedestrian trail that opened through the University of Minnesota in Minneapolis a year ago has been too hard to find, say community residents working to improve the Dinkytown Greenway’s visibility.

“We want a gateway kiosk, other signs with maps to help people find their way around,” said consultant Richard Lang, a principal with Visual Communications. “We want to create some interest, identify what the streets are and how long the distances are.”

Lang, a consultant working with the University District Alliance and other communitymembers, will organize a plan to determine the best means to mark the bicycle and walking trail to help people find their way and learn about the community at the same time.

The Dinkytown Greenway begins near the TCF Bank Stadium on the east end of the campus, diverges from the auto traffic at the north end of Oak Street, passes under Dinkytown, goes across the Mississippi River on bridge No. 9, and ends at Bluff Park on the West Bank. By mid July, the trail will continue from Bluff Park through a tunnel under I-35W to 13th Avenue South, ending about six blocks from the Guthrie Theater and the new Vikings Stadium.

But because the greenway cuts across the grid under Dinkytown, many people have been confused about where to enter the trail. A walking entrance is a path across the street from CVS Pharmacy just east of the Fourth Street bridge. An easy bicycle and pedestrian entrance is at the east end of the Fifth Street bridge at the end of 17th Avenue Southeast.

Ted Tucker, a Marcy-Holmes neighborhood resident and former chairman of the Alliance, and Cordelia Pierson, former president of the Marcy-Holmes Neighborhood Association, have helped assemble grant money to identify the signage needs for the area which already has some of the heaviest bicycle traffic in the state.

To help bicyclists and pedestrians find the route, Tucker has identified many corners throughout Southeast Minneapolis where signs could help people decide whether to turn toward the greenway.

A task force from the Marcy-Holmes Neighborhood Association  will work with the consultant to measure the neighborhood’s needs and to design signs and kiosks to help people bicyclists and pedestrians understand how to find the greenway and to get directions once there.

The process will begin with a survey, which will be posted online (www.dinkytowngreenway.org) to determine the community’s and the users’ priorities, and conclude with recommendations for the city on the design, location and content of markers. Most of the work could be completed by fall, Pierson said.

The task force and consultants will recommend the directions, places and themes to emphasize.

About 10 residents and consultants met June 25 to discuss possibilities for the way-finding aids that could include public art and sculpture, history of the area, and information about nature and the Mississippi River. Markers should also tell people where they are and how to get to desired locations.

Tucker said one theme is the connections the trail makes. “A theme of this path is that it was once a creek; then it was a railroad, and now it’s a bike and pedestrian trail. The big thing is that this is a connector. It was probably a trail long before the railroad discovered it because it was a creek cutting through a bluff.” 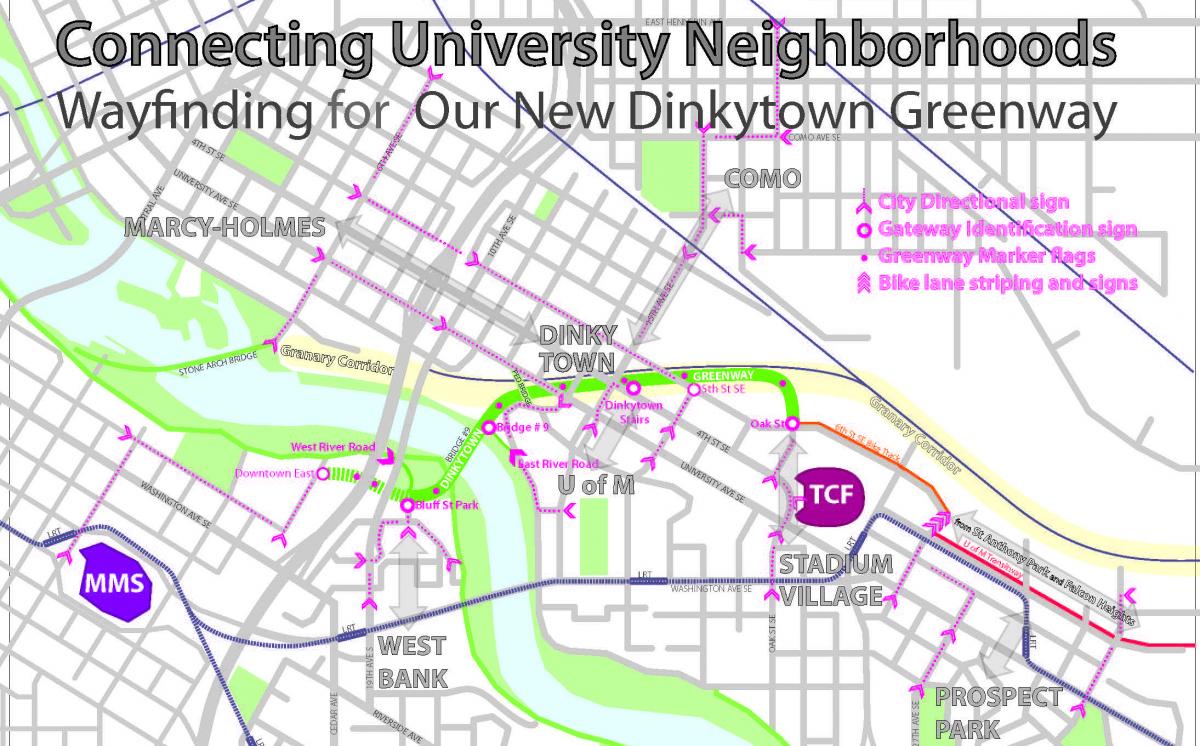 This map by Ted Tucker shows the Dinkytown Greenway, the heaviest green line with dots showing entrances at Oak Street, Fifth Street, and the proposed Fourth Street stairs. The red lines on the right are connections to bike paths and the University transit way connecting to the St. Paul campus and the State Fairgrounds. 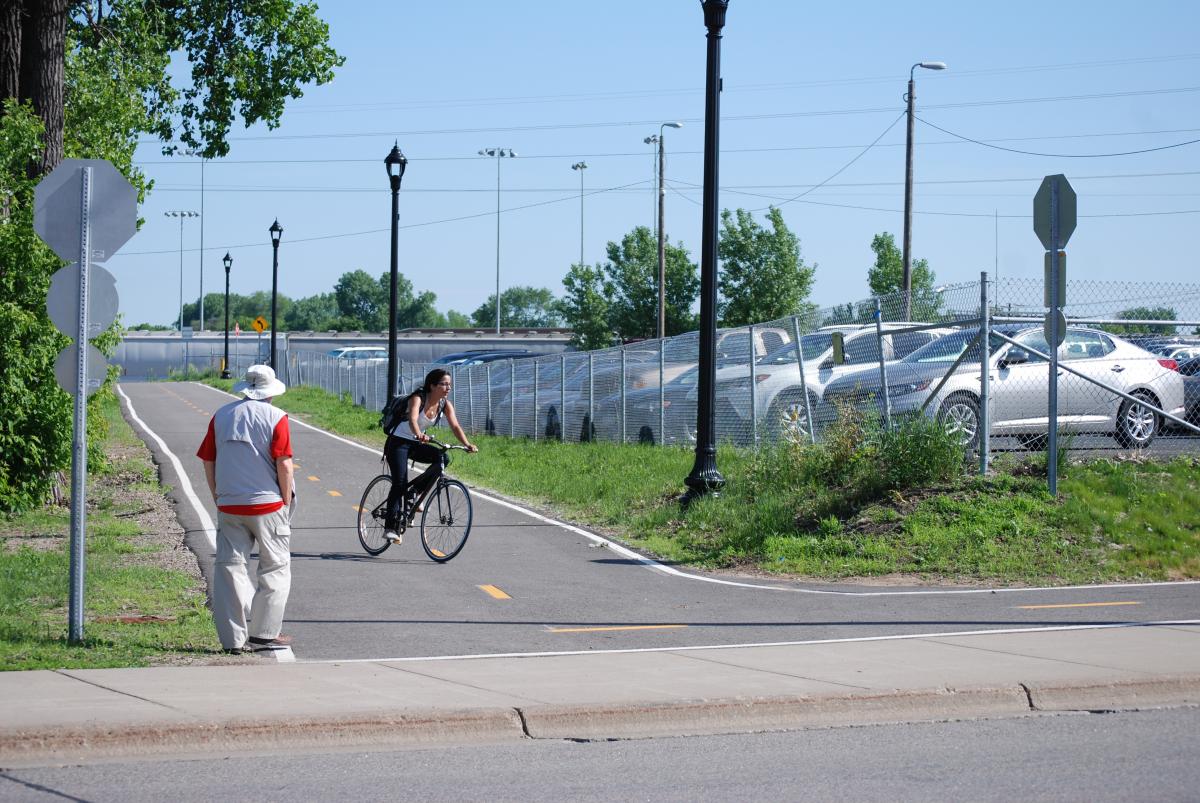 The Dinkytown Greenway begins at an unmarked corner at the north end of Oak Street near TCF Stadium on the east end of the Minneapolis campus. (Photo by Bill Huntzicker)

The greenway on the left is part of the larger Granary Corridor that includes a rail line still owned by the Burlington Northern Santa Fe Railroad. (Photo by Bill Huntzicker) 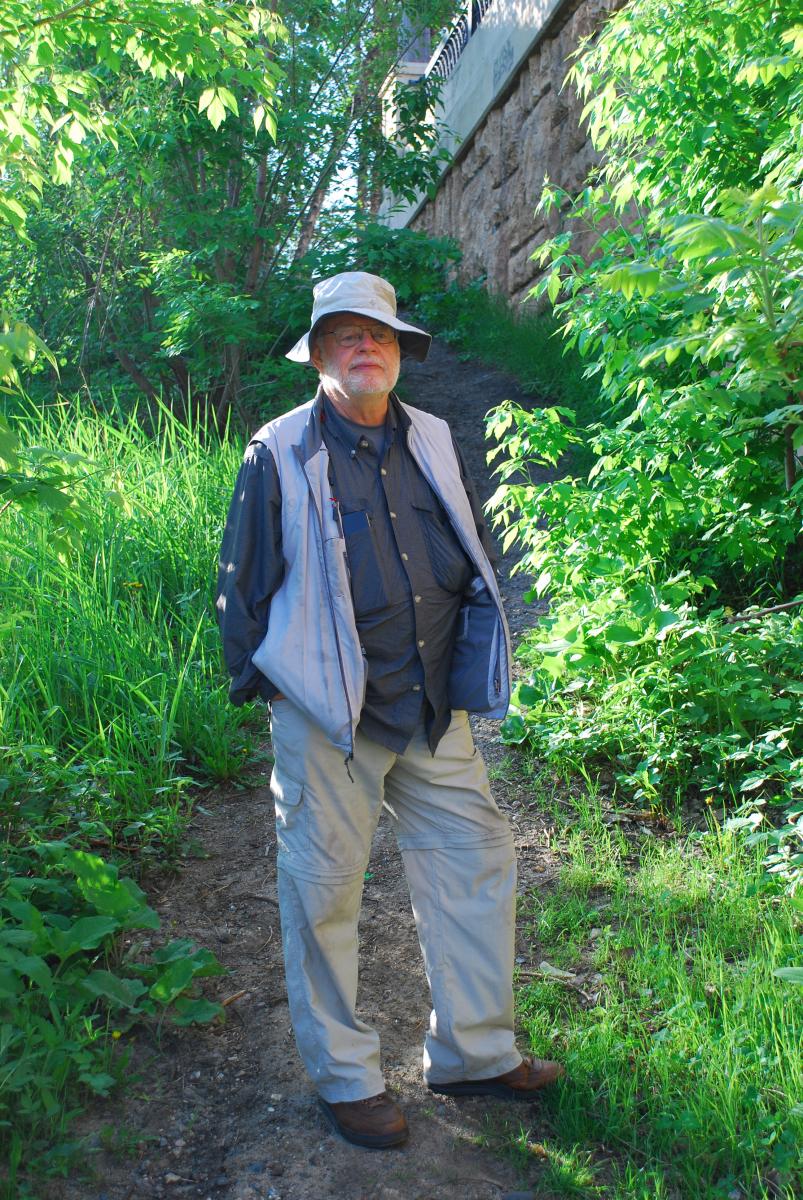 Ted Tucker stands on path for pedestrians across Fourth Street from CVS Pharmacy in Dinkytown where a stairway will be built in the future when the funding is approved. (Photo by Bill Huntzicker) 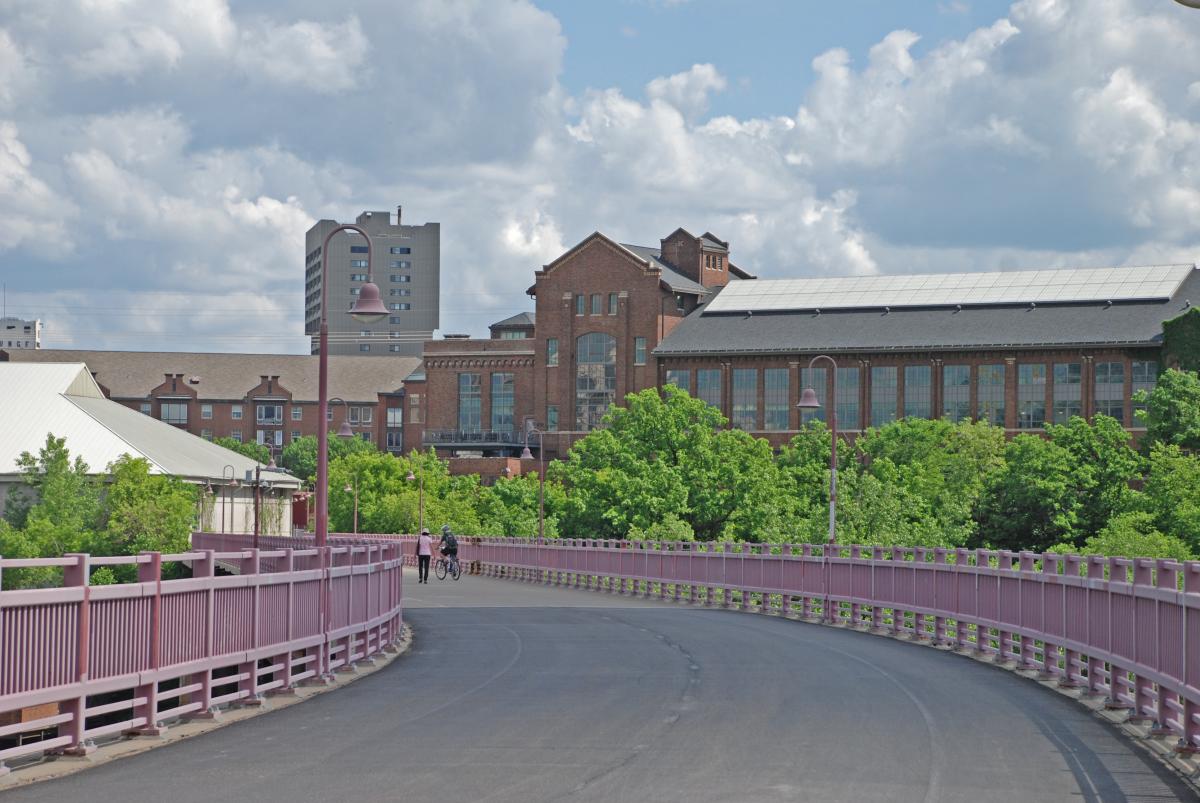 Both this Bridge No. 9 and the University’s adjacent building have been revamped, the bridge built for Northern Pacific passenger trains now provides the bike and walking trail and the former Mineral Resources Research Center has become the Education Sciences Building, complete with a Dunn Brothers coffee shop on the bike trail. (Photo by Bill Huntzicker) 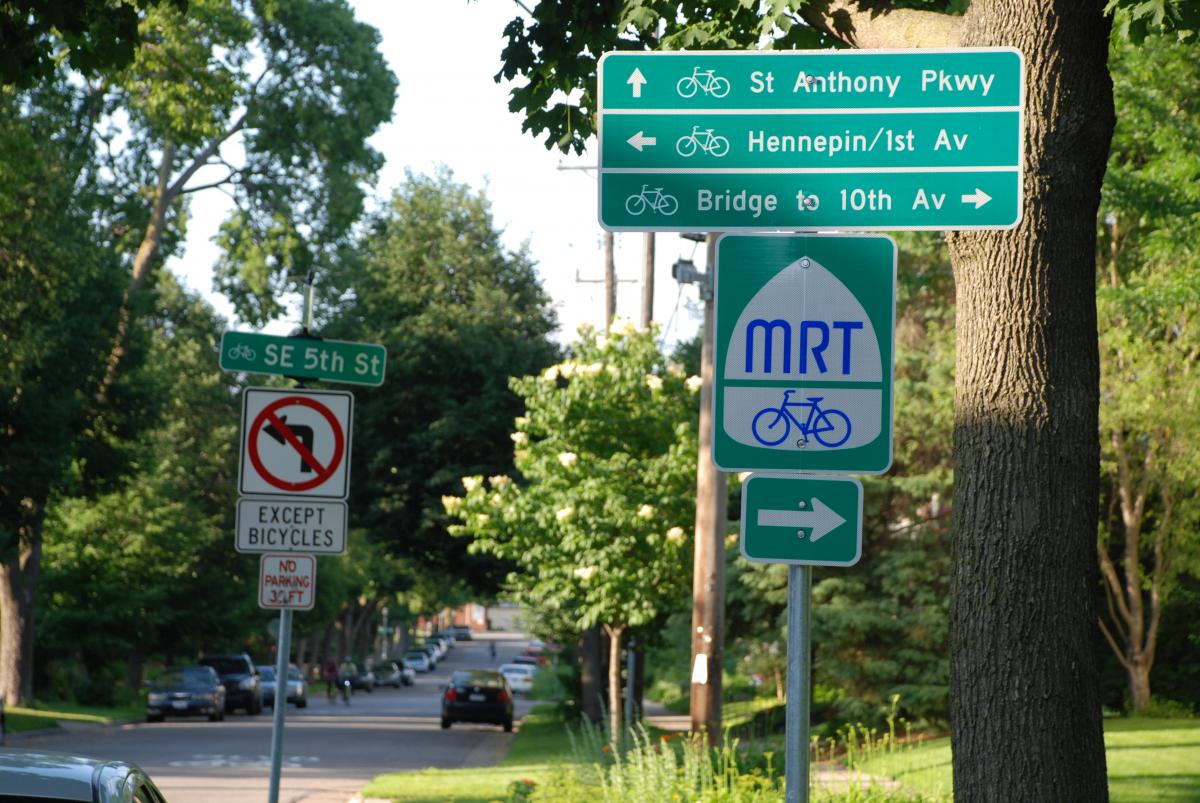 Signs, like this one that includes the Mississippi River Trail marker, will be on corners throughout the neighborhood will help bicyclists find the Dinkytown link. (Photo by Bill Huntzicker)

Others said the trail now connects major entertainment and sports venues, including theaters and stadiums downtown and on campus.

Lang suggested that the neighborhood consider distinguishing features about the University, Dinkytown, the multiculturalism of the area and its growth and development, and the fact that it is in an abandoned rail site. “We don’t want it to look like a carnival. We don’t want a theme park, but we want some criteria for development in the future,” Lang said.

Como neighborhood resident Katie Fourier and Rob DeHoff, owner of the Varsity Bike shop in Dinkytown, emphasized the importance of people who bike to more distant destinations, like the State Fair and Stinson Boulevard in Northeast Minneapolis. Fournier also suggested directions to public places, like Marcy School and Holmes and Van Cleve parks. Fournier also suggested using some of the community’s current themes, such as live near your work.

Pierson said she’d like to emphasize the art, history, the nature of the University and the river.

“This is a process,” Lang said. “Once you see a plan of what a sign’s going to say, you know what you don’t want.” People will then have many opinions once a plan is suggested.

The challenges will be to decide on the nature of the signs and other markers, decide what people want and need to know, what places to emphasize and other connections to make, Lang said.

DeHoff said he’d like to see a mock up of the plans at a Dinkytown transportation forum scheduled for 5 to 8 p.m. Aug. 12 at the Varsity Theater. Pierson and Tucker said they’d like to have a big public meeting to discuss the plans in mid September.