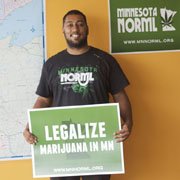 The new buzz around town is around the legalization of marijuana. People are discussing both medical and personal use. I had a sit-down conversation with a local community leader who is attempting to obtain justice around the issue of legalization.

A new cause for a veteran activist

Marcus Harcus is the new executive director of Minnesota NORML, a nonprofit membership-based grassroots lobbying organization that is the statewide affiliate of the National Organization for the Reform of Marijuana Laws (NORML).

Harcus is no stranger to community organizing for social causes. During his school years at Patrick Henry High in Minneapolis, Harcus, frustrated with the mistreatment of Black students, drafted a four-page message to the students and organized a walkout.

Harcus was able to generate a lot of energy and mobilize the other students. However, he became discouraged by a mentor of his and called off the walkout. The mentor implied that if he spends all his time attempting to fight injustices, he would be wasting his time.

The costs of criminalization

This is one of the issues Harcus would like to address head on: “In Minnesota, two-thirds of all drug arrests are for weed… We funded studies that show that Minnesota spends about $150 million annually enforcing marijuana prohibition. And up to 12,000 people get arrested every year, mostly for minor possession.

“There is a stark racial disparity in these arrests, where eight African Americans are arrested for every one European American in the state of Minnesota despite relatively equal usage rates. It’s an unjust system that affects thousands of people from all backgrounds. However, it disproportionally affects our people.”

Harcus believes that most people, especially African Americans, use marijuana for health and social-related reasons. According to him, the main reason African Americans use the drug is stress.

In Minnesota NORML’s short time in existence, it has been able to form five chapters throughout the state. The organization plans to do base building, public education, and a lot of lobbying. “We are trying to change laws,” Harcus declares.

It is often misunderstood that groups like Minnesota NORML are advocating for people to get high and be reckless without consequences, which is not true. “We are not trying to advocate for people to start smoking,” he emphasizes. “It’s just [that] we do not want people to be arrested who do.”

“Sadly, this is mostly a White movement,” Harcus admits about marijuana legalization activism. “Also, it is mostly older White folks. We are trying to diversify it. I do not want the Black community to be sleeping and to just wait until we miss all these opportunities. The fact that we suffer the brunt of these bad policies [means] we should be advocating at the forefront to end them.”

It is vital that the Black community have a voice and place at the table on this issue. On Saturday, October 18, there is an opportunity for the community to be heard at the Political Action Conference to be held at the Minneapolis Convention Center featuring Columbia University professor and author Dr. Carl Hart as the keynote speaker. For more information, call 612-584-3101 or go to www.mn norml.org.

Brandon Jones M.A. is a mental health practitioner. He welcomes reader responses to openeyesopenmind@ymail.com, or follow him on Twitter@UniversalJones.