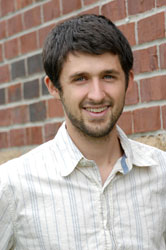 Brian Noy of Augsburg College and the Campus Kitchens Project

Those in the Seward and Cedar-Riverside area may have noticed more tomatoes, carrots, and peppers in their neighborhoods. Residents may have also been witness to an influx of delicious-smelling, home-cooked meals throughout their community. This increase in satisfied stomachs and a more food-conscious community can be partially attributed the work of Brian Noy and the Campus Kitchen Project.

Noy’s interest in food systems came from his upbringing on a farm as well as his study of sustainable agriculture at the University of Minnesota. At the U of M, Noy had the opportunity to engage in issues surrounding food justice and food networks, rather than how to just grow food.

“From there I worked on professionally organizing farmers markets as my main job, and then I moved onto working on youth development,” Noy said. “And I wanted to work in a higher education setting, and Campus Kitchens was a perfect fit.”

Campus Kitchens, according to Noy, is an open and flexible system that provides meals to the community as its core operation. In addition to feeding those in need, Campus Kitchens exists in a setting that engages students in economic and social justice.

“The Campus Kitchens project uses food as a tool to make the connection between the campus and the neighborhood,” Noy explained. “A tool for leadership development; for service learning opportunities; and for a way to increase access to healthy food and the basic needs of our neighbors.”

When Noy was hired as Augsburg College’s coordinator of the Campus Kitchens project, he aspired to continue the meal service program, expand the community garden, add to the nutrition program, expand the places to which the program served, and to focus his efforts on educating the neighborhood’s summer youth. Working with a Leadership Team of 8 to 12 students, the team has superseded the expectations of the program and are in the process of developing a youth entrepreneurship program to create healthy meals for neighborhood summer programs.

“At most colleges there is a level of idealism, opportunity, and excitement, but Augsburg is actually really special because civic engagement and service learning is such a strong part of the college’s identity,” Noy added. “So, there’s that support, structure, and resources for students on an institutional level.”

The Campus Kitchen divides its work into four distinct efforts which use food as a tool for civic engagement: Food to Share, Food to Grow, Food to Buy, and Food to Know. Food to Share is Noy’s primary effort to take surplus food from the cafeteria and to distribute about 2,000 meals a month to institutions in need. A’viands Food & Services Management works closely with Noy to help carry out this effort.

“A’viands, or Augsburg Dining, comletely supports what we’re concerned about with nutrition and health,” Noy added. “The management and staff is fantastic in supporting us and making sure that we have enough food so that we can serve the community.”

Food to Grow is Noy’s endeavor to maintain a community garden on Augsburg’s campus. The garden holds 100 plots which are tended by community organizations, area churches, youth groups, neighbors, students, and faculty members of the college. “So it’s a really diverse mix of people from different areas of life and different areas of the world,” Noy added.

Noy’s mission to run and sustain mini-farmers markets in the Seward neighborhood and the greater West Bank area is an effort he calls Food to Buy. Another aspect of Noy’s Food to Buy is serving as a Community Supported Agriculture (CSA) drop off point for those who have shares in a local farm. According to Noy, parts of the surrounding community are situated in urban environment which Noy calls “food deserts.”

These areas, which often have high concentrations of poverty, do not have affordable and immediate access to healthy food. Instead of organizing a full farmers market, Noy said that he worked to identify where there was a need for high-quality food and then he collaborated with a few farmers to directly serve those areas.

“We worked with the city to fund expanding [the markets] to new sites. The city worked to change their policies to support us better by making it cheaper and easier to obtain permits,” Noy said. “We now have a network of over 20 mini-markets across the city in just a few years.”

Food to Know is the education aspect of Noy’s food-based civic engagement project. According to Noy, this program informs participants of the functions of a food system, as well as how to grow and prepare healthy meals. This effort is particularly emphasized for the neighborhood’s youth participants during their summer vacation, but Noy reports that he is looking towards doing more education for adults and Augsburg students.

If anyone is interested in getting involved by delivering meals, working in the garden, or supporting the farmers market, please contact the organization at campuskitchen@augsburg.edu or visit Brian Noy is the Sabo Center office on campus.