In a perfect world, Mike Adair would have plenty of time to join the Occupy Wall Street protests. But in this world, the Eagan resident’s time is occupied by the demands of his small business, his master’s degree program and his four children. “That stuff covers 99 percent of my time,” Adair said. 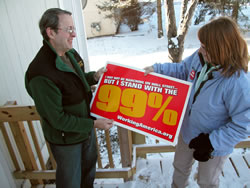 Chase Brandau, an organizer with the “9 Demands of the 99 Percent” campaign, said Occupy’s central message of growing income inequality resonates with members of Working America, an organization that gives a voice to workers who do not have a union on the job.

“We saw a need to get the message of Occupy – the demands of the 99 percent – out of the singular location downtown Minneapolis, and to expand the message to other areas in the state and the suburbs, in particular,” he said. “A huge amount of people aren’t able to go downtown and pitch a tent or go to the rallies.

“There’s a lot more support for this, and that’s what we want to show.”

To that end, Brandau and Working America member Sue Evarts of Eagan spent a cold Saturday in January criss-crossing the city streets of Burnsville and Eagan, visiting members like Adair and dropping off lawn signs that read, “I may not be marching on Wall Street … but I stand with the 99%.”

Evarts, an out-of-work biology professor, said she volunteered to help distribute the signs because she wants her suburban neighbors to know the Occupy movement has broad support – that it can’t be dismissed as a group of complainers who “need to take a shower and get a job,” she said.

Brandau and Evarts’ first stop was the home of Lloyd Hansen, who eagerly accepted a yard sign. (Hansen will have to display it in his window for now, though, until his yard thaws.)

“Wall Street is a great danger to the country,” Hansen said. “The message the bankers are giving is they don’t think about anybody else. There is a crisis of greed in this country.”

Brandau and other Working America organizers are hearing more and more Minnesotans identify greed as the root of the country’s economic troubles – a credit, he says, to the success of the Occupy movement.

“The awareness this year versus last year about income disparity in this country is amazing,” Brandau said. “We really see that reflected in our organizing efforts and in our conversations with our members. People know something is broken in our system, that things are not set up in a fair way.”

At the last stop on Brandau and Evarts’ route, Adair put the yard sign in a window where it would be sure to catch the eye of his “Tea Party conservative” neighbor.

“In today’s polarized environment, it’s important to show solidarity with people who are unemployed, under-employed and underpaid,” Adair said. “That’s why I support the Occupy Wall Street movement.”