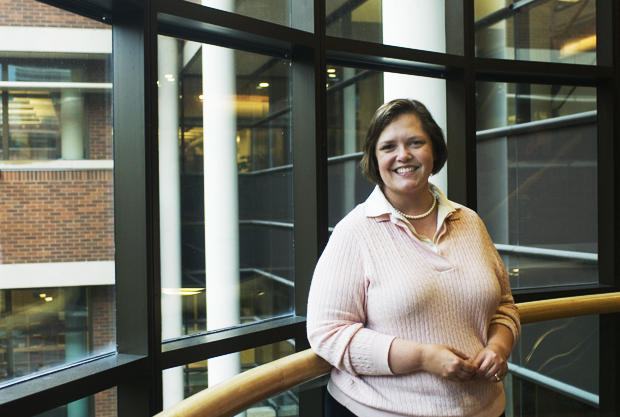 Speaker of the Minnesota House of Representatives Margaret Kelliher will seek the DFL endorsement for governor in 2010.

As a young girl growing up in Mankato, Minn., Margaret Anderson Kelliher was taught a lesson that shaped her future: hard work and perseverance are essential to good politics.

MN Daily Editor’s note: The following is the first in an ongoing series profiling candidates for the Minnesota governor in 2010. Members of the state’s Republican, Democrat and Independence parties with significant public policy experience will be featured.

On Sept. 16, Kelliher, the Speaker of the Minnesota House of Representatives, announced she would seek the DFL endorsement for governor in 2010. Since, she has whirled across the state making public appearances to showcase a campaign that calls for increased priorities in Minnesota’s education, health care and economy.

Kelliher, who represents Minneapolis in the Legislature, grew up on a dairy farm where she was active in organizations such as 4-H, serving as state president. As a teenager, she earned the title of Minnesota Dairy Queen and participated in protests at the Capitol during the 1980s.

“I became interested in what was happening in Washington and at [the state Capitol] while experiencing firsthand how economic trends affect people,” she said. “That’s where my passion for this developed.”

The youngest of six children, Kelliher recalls her family’s farm surviving hard times during the farm crisis of the 1980s.

“I know what it’s like to struggle. My brothers had to get town jobs because our family could no longer afford health care,” she said. “It is instances like these that make me understand Minnesota’s need for a move toward universal health care.”

With the health care debate raging in Washington, Kelliher calls for a government that ensures goals are met to reduced costs of medical attention and prevent illness before it happens.

“Many Minnesotans I’ve met never take home a dime from their paychecks because its entirety goes toward health insurance,” Kelliher said.

The progressive DFLer has spent more than two years as Speaker during a period she called, “a rebuilding of multi-partisan politics.”

Sen. Scott Dibble, DFL-Minneapolis, who is acting as treasurer for Kelliher’s campaign, said that the campaign strives to drive interest and understanding with voters of all political persuasions.

Both Kelliher and Dibble said civility has been missing at the Capitol, something Kelliher can overcome.

Kelliher said she emphasized multi-partisan politics as speaker, helping to bridge the gap between parties.

“I believe in my ability to connect to across party lines,” she said. “I’m a person who’s comfortable driving a minivan and a tractor, and one who can drive the state toward justice, progressivity and fairness.”

Kelliher lead the House of Representatives, including six Republicans, to override of a Gov. Tim Pawlenty veto in 2008, passing a transportation bill that accounts for nearly $6.6 billion in spending over a period of ten years.

“We built a coalition between Democrats and Republicans, between business and labor,” she said. “I am someone who brings people together. I know the issues that are important to Minnesotans. I understand their uncertainties.”

Kelliher contends Pawlenty’s administration has disinvested in Minnesota. Her campaign stresses the need for government accountability.

If elected governor, Kelliher said she plans to repair Minnesota’s schools from ground up.

Kelliher said under Pawlenty’s administration, there has been a reversal in public funding for higher education.

For the first time this year, the University of Minnesota gets more funding from tuition than it does from the state.

Kelliher said she hopes to overturn current education issues by advocating for increased funding to schools without increased debt to students.

Education is at the core of Kelliher’s campaign. She said in order to have a productive and creative workforce, a strong public education system is imperative.

As a woman in government, Kelliher has found comfort in hundreds of supporters who want change.

“We’ve never had a female governor. Maybe that’s something we should try,” Kelliher said.