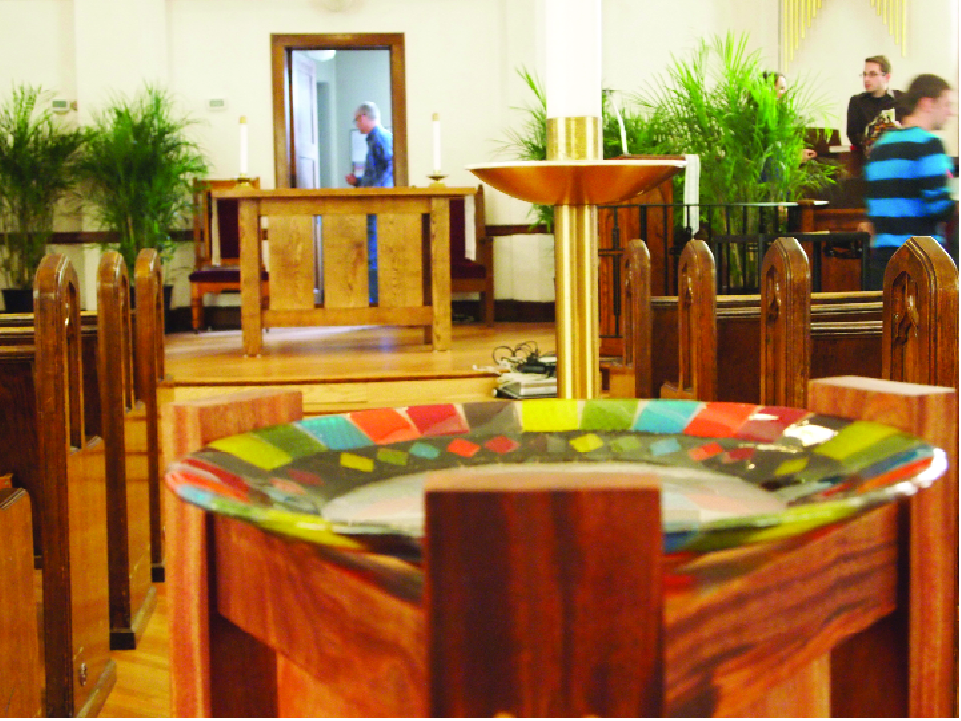 Gethsemane’s new baptismal font, in the foreground, and altar in background. (Photos by Margo Ashmore)

It’s a dimly-lit space, but it’s been a spot of brightness to hungry families in the greater Camden Community, as well as holding a key to keeping a 120-year-old church alive. The Camden Promise food shelf, and other programs of The Camden Promise, are joint efforts of three congregations worshipping at 4656 Colfax Ave. N.

John Nelson, with help from his brother Jeff, constructed the table and baptismal font in honor of their father, Chuck. Connie Beckers made the bowl.

Down the stairs from the sanctuary, there’s the area where children play while their parents shop at The Camden Promise Food Shelf in the original church’s former gym space—accessed through a maze of hallways and stairs. The building was added onto in its heyday, with spaces still in use for fellowship and New Horizons child care center, renting space to the south.

The Camden Promise, formerly the Jeremiah Project, is supported in varying degrees by the three churches. “It’s an idea of how to give back to the neighborhood,” said Gethsemane Parish Minister Roxi Mork. “God wants us here on this corner. Everyone is welcome here. We say ‘come as you are. Remember Jesus wore sandals’ so it makes no difference what you look like or who you are.”

Tuesdays and Thursdays are the only days there’s not some kind of food available through The Camden Promise. On the first and third Saturdays each month, Camden residents who’ve registered can shop using points, 10 per month for every registered person in the household. “We do not know what your family eats or what foods you purchase…you will not simply be handed a bag of food,” their brochure states.

The points expire each month. On their way out, recipients can take fresh breads, bakery items and produce donated by Cub Foods. “There are limits on them but you always get something,” the brochure continues.

To take part in the Food Shelf, recipients check in at 10 a.m. and are given a registration number. Then they come back at 12:15 and shop, in order, with eight people in the food shelf at a given time. Items are counted and weighed, then they pick up produce and bread, take their food to their cars and pick up their children, who’ve stayed in the lunch area. They can all have lunch before departing.

On Sunday following the food shelf days, The Camden Promise puts on “Breakfast and a Bag” where folks come for a hot breakfast 8-9:30 a.m. and leave with a bag of produce and breads.

Then, during the week, on Mondays, Wednesdays and Fridays, just the produce and breads are available. Recipients get a number at 10 a.m. and then stay until the food comes at 11 or after. “Bring a bag for your food.”

Beth Peterson’s area is The Clothes Closet, open whenever the food shelf is open, offering free donated clothing. A lifelong Camdenite who now lives just over the border in Robbinsdale, she said that two years ago, it was feared the church would close. “A lot of the people who come through” the food shelf “have joined, and now volunteer. We are meeting our neighbors.” The church is getting stronger.

About 260 newsletters are sent, and Sunday worship attendance varies by weather and other factors, between 60 and 90, Mork said.

“Come back tomorrow for breakfast,” she encouraged a shopper. “Breakfast and a bag.” He said he was running low on gas, but might do it. Mork said there are a lot of walkers coming to the church, and a bus line is not far away.

Mork said the boxed and canned items come from direct donations and purchases from the Second Harvest Food Shelf. A goal is to have a different church or business collecting donations once each month. For more information, call 612-521-3575 or look on the website, www.TheCamdenPromise.org.

Gethsemane Lutheran Church maintains about a dozen other programs or events for its members and community, the most recent the Night of the Stars by the youth group held April 28. The pastor is Jeff Nehrbass, church phone 612-521-3575. 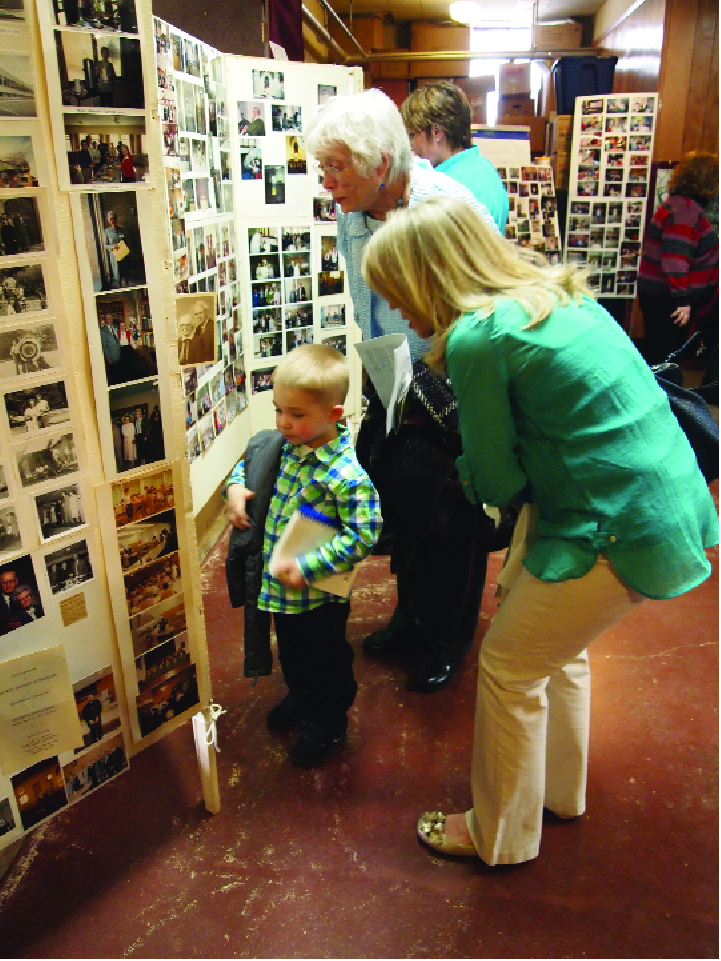 Following the 2:30 p.m. special service April 14, members of Gethsemane Lutheran Church reminisced about weddings and other events through photo displays in the original church basement. By 1917 the church was already almost a quarter-century old, still showing its Norwegian roots. 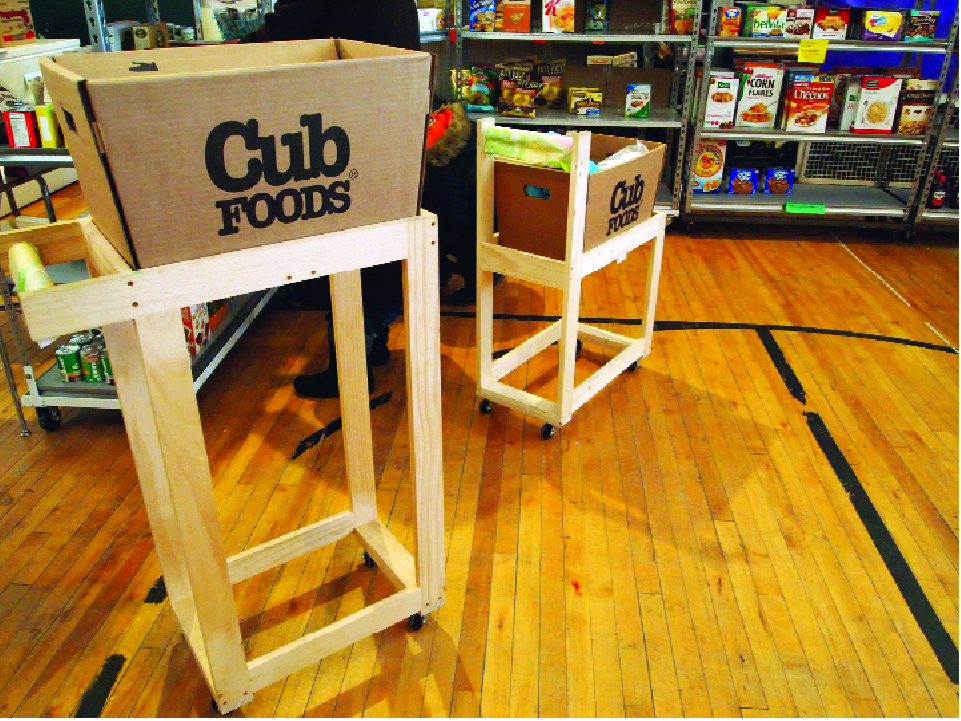 Specially-made shopping carts allow eight people at a time to be choosing their food and household items in a space that fills up fast at The Camden Promise Food Shelf.

CORRECTION: NorthNews incorrectly identified one of the partners in The Camden Promise as the Evangelist Temple. The third partner on the corner of 47th and Colfax is NuWay Baptist Missionary Church.