No, I’m not joking. David Levinson wrote about an often overlooked but important subsidy* given to drivers: the lack of sales tax on gasoline and auto/truck purchases. I’m surprised this hasn’t received more attention given the other distortions that see press. Yes, we pay a motor vehicle sales tax when buying a car, but that is supposed to be a user fee for funding roads (well, 60% of it at least). Yes, we also pay state and federal gas taxes, but again those are user fees (the MN gas tax is 100% dedicated to the Highway User Tax Distribution Fund).

*The word subsidy is often used when no direct subsidy is actually taking place. In this instance, like the mortgage interest deduction or similar policies, the lack of payment acts as a price distortion given lack of exemption for most other goods purchased. It’s not a subsidy per se, but the term works good enough.

We pay sales taxes on windshield wiper fluid, oil, tires, parts, and other necessities to keep our cars moving. We also pay a sales tax on refrigerators, stoves, lights, and thousands of other durable goods (and other not so durable ones) to live a modern life. Cars and gas shouldn’t be any different (in the author’s humble opinion).

Let’s evaluate what this would mean under politically possible scenarios. What do I mean by “politically possible”? Well, it’s very unlikely that we’ll see a statewide increase in total sales tax collected. Not only is the sales tax one of the more regressive taxes around (making it unpopular with liberals), raising taxes (on cars and gas, specifically) would not go over well with conservatives. So, I’ll limit my analysis to revenue-neutral only. 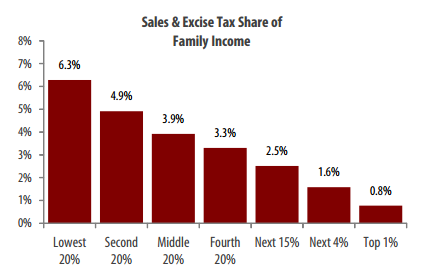 Nothing political here. Sales taxes are a much higher burden on lower income families. Source: ITEP

For my analysis, I will be referencing the current gas tax ($0.285/gal, assumed across all gallons sold – an incorrect but rough estimate) and MVST Rate (6.5%), gas tax, general sales tax and MVST revenue collected by the state in 2013, a rough estimate on 2013 average gas price of $3.20/gal taken from here, spending information from the 2013 BLS Consumer Spending report, and number of MN Households. Again, in all scenarios I hold total revenue collected constant, otherwise we’ll get into a debate on if the current amount raised is too high/low and if the programs the money goes to are necessary. Also, when I say “add a sales tax to MVST,” I am proposing keeping the current 6.5% as a user fee (we need a dedicated funding source for roads) and the resulting general sales tax rate would be on top of that.

Scenario 1) We add a sales tax to gasoline and motor vehicle sales, apply a lower rate to all goods.

Scenario 2) We add a sales tax to gasoline sales only, apply a lower rate to all goods. Why? 3 million Minnesota residents live within roughly an hour drive of Wisconsin. If a family only buys a car every 4-5 years, they’ll likely make the trip across the border.

Scenario 3) We add a sales tax to gasoline, motor vehicles, and clothing. I know, taxing clothing seems extremely regressive, since it’s basically a requirement to survive. I’m just testing the waters here to see how the numbers shake out, and since clothing only represents roughly 3-3.5% of household spend for families making less than $40,000 per year. That share is roughly the same as higher income households (making >$70k), who also spend 3.1%. Compare that to groceries, where lower income households spend around 11% of their income, while higher income families spend more like 6-8%.

Scenario 4) We add a sales tax to gasoline and clothing, but forego vehicle sales, apply a lower rate to all goods.

We see that we can reduce the general burden on the MN sales tax by anywhere between 0.8% and 1.6% with these four scenarios. I’m inclined to suggest Scenario 1 – as a state, we shouldn’t favor the purchase of automobiles over other consumer spending by under-taxing it. Clothing is a pretty small household expenditure (clothing spend in low income households is half that of just gasoline, for example), but pragmatically, this will never fly in a fairly progressive Minnesota (and one where a certain mall will lobby hard to keep visitors coming to buy their wares on the cheap). The net result for an average Minnesota family/individual would be no additional tax burden. If you buy a lot of cars and drive a lot, you will likely pay more in total sales tax. If you own fewer cars and/or drive less, you’ll pay less.

Yes, Wisconsin or North Dakota may say they’re “open for purchase” or something similar, that’s fine. We could make it a requirement to pay the sales tax when registering a vehicle purchased outside the state to avoid this behavior; presumably, nearly all cars bought in Wisconsin acquire new MN titles, no? We used to dedicate a significant chunk of the MVST to the general fund – as recently as 2002, 69.14% was sent to the general fund, with years prior to 1980 seeing none dedicated to transportation. My guess is the DOT and state began realizing that gas taxes alone weren’t covering system maintenance and expansion so they began searching for ways to pay for roads. Fine, keep the MVST as a user fee (though I disagree with using fixed costs like these instead of mileage– or congestion-based ones), but lower the sales tax burden on everything else we all buy.