Sometimes I get an idea so brilliant, it borders on the diabolical.

So here’s the story;

Today was the William O’Brien 10 mile trail run. (Motto: “The hills! Sweet merciful Jesus, the hills!”) Anyone of you from around this neck of the woods knows that we had a string of severe storms the past two nights and probably half of the Twin Cities is without electricity, even now. We lost power at maybe 8:00 last night and it still hadn’t returned this morning. Because of this, I was uncharacteristically lacking in pre-race jitters since I seriously doubted we’d be running at all. Driving past the downed trees and darkened houses it certainly seemed a remote possibility. However, without the benefit of internet, there was no way to know for certain that the race had been cancelled. I’ve never NOT run a race I’ve registered for- probably owing more to my legendary cheapness, than iron-willed determination- so off we went.

We took our time, enjoying the hour ride sans children. We even stopped for coffee and donuts along the way. Normally my nerves are such I can barely force myself to choke down a dry waffle which is ridiculous. I mean, it’s not like I’m going to win anything….

I was so happy we went. A mere hour out of the cities and they had experienced only a small rainstorm. The morning was cloudy and cool, there were no blocked trails or, mercifully, snakes, so this was head and shoulders above our past experience, as far as I was concerned. We even made it back to the the finish in time for the awards ceremony, which was, in itself, a triumph.

Here’s where my stroke of genius comes into play.

When you register for certain races, you have the opportunity to chose your own category; in this case, age groups or the Clydesdale/Athena division. Clydesdale/Athena is for those of us who are substantial runners. Runners of a certain weight. There are even websites where you can punch in your weight and finishing time and they will tell you the time you would have had, were you not so, um, abundant in proportion. I had chosen this division, shrewdly figuring that most women are far more likely to fess up to their age versus their weight. And guess what? 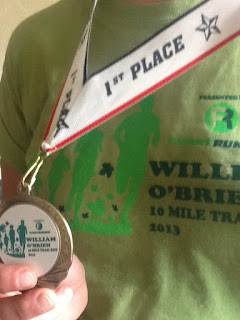 Yes, I was the only woman willing to check the box whose subtext reads, “Yes, I really could stand to lose a few pounds.” Knowing this would, you’d think, tamp down my enthusiasm for this particular award.

You’d be so wrong.

I am still stupidly, deliriously happy. I never got tired of looking down at the medal, nor of asking Hubby every third minute if he’d like to see it. I wore it when we stopped for lunch, asking Hubby if he thought they’d give me a free taco since I was my division winner. (They did not.)

And the absolute best part of it is with a minimum weight cut off of approximately 140 pounds, I will never, ever, be anything BUT an Athena runner.

HA hahahaha!!!! I feel just like Lex Luthor must when he comes up with the perfect crime.