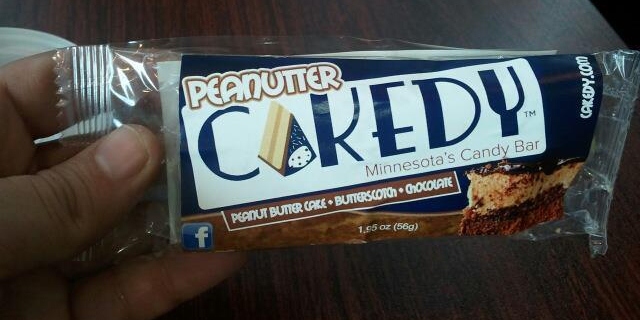 Earlier this week I had a meeting where several colleagues continued our plans to make north Minneapolis even more amazing than it already is. It should go without saying that there wasn’t enough time in the initial meeting to fully discuss our plans, so the gathering spilled over and into the Avenue Eatery, where we continued our benevolent scheming. As I was placing my order, a colleague and friend said he wanted to make sure I tried this new candy bar that was made by a north Minneapolis resident. He even insisted on paying for it, on the condition I promote a northside business on my blog. Sold!

Cakedy’s website is pretty whimsical, claiming that “If Willy Wonka and your cake baking granny made sweet love, the resulting lovechild would be Cakedy.” That’s an ambitious claim, albeit not quite as conceited as Victory 44’s “Perfect Burger,” nor as preposterous as the possible slogan, “If Batman and Teddy Roosevelt were in a cage match fight to the death, but decided to settle their differences in an Iron Chef bake-off instead, the winning entry would be Cakedy.”

And since I believe peanut butter and chocolate to be the best pairing other than perhaps Han Solo and Chewbacca, that’s the flavor I went with. The Cakedy candy bar has, as the name suggests, cake on the inside, as well as nougat and butterscotch chips. It was a good thing I was sitting down already, because the concoction made me weak in the knees. The sweetness hits all the pleasure centers on the tongue and in the brain, and the texture of the cake and nougat is sublime. If you still think of Reese’s candy products as the defining chocolate/peanut butter combo, it’s only because you haven’t tried Cakedy yet.

Not only are these candy bars made by a local, they’re sold at the Avenue Eatery and at another northside-owned business, Local D’Lish. On top of that, they’re reasonably priced, or at least they were for me. 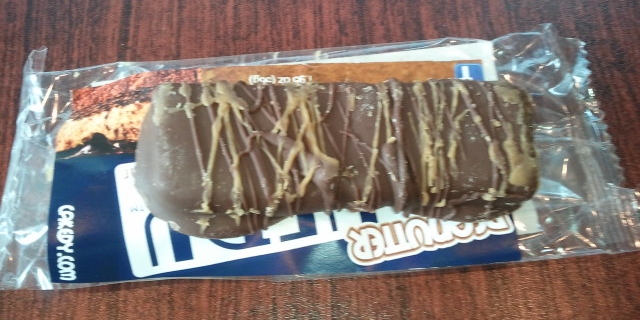