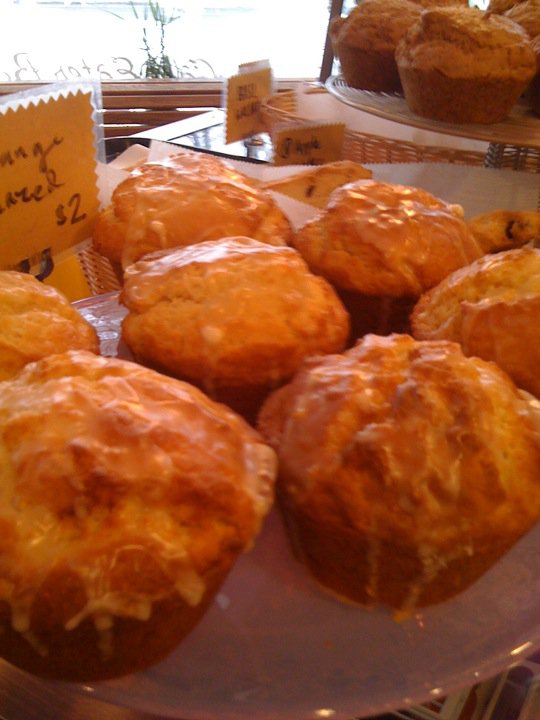 A recent offering of Orange-Glazed Muffins

If you stopped by Cake Eater Bakery (2929 E. 25th St.) during the first two weeks of January, you may have noticed that the doors were locked, the windows were covered, and delectable, uncharacteristically savory smells emerged from the building’s walls. You may have even asked yourself, What is this mad laboratory of a bakery concocting now?

These questions, among many others, were answered as the bakery, now under the sole direction of owner and chef Emily Moore Harris, reopened on Jan. 15.

Last December, former co-owner Sheela Namakkal decided to continue her career as a cupcake connoisseur at Bleeding Heart Cakery in the windy city of Chicago, IL. This left Moore Harris and her husband, Taylor, to shift the focus of the bakery toward a café-style menu that includes savory options for hungry patrons. According to Moore Harris, this menu expansion is an attempt to “[attract] new customers as well as more of the neighbors who are not sweets lovers.”

Since reopening, the cupcake menu has been refined to two or three options, as opposed the usual six. The most recent offerings at the bakery were Mop Top-almond cakes with marzipan icing, topped with chocolate, almonds, and coconut, as well as Black Cat Mocha-mocha cakes with dark mocha icing. In case your sweet tooth can’t be satisfied with three cakes, Cake Eater still offers scones, muffins, as well as an assortment of cookies, brownies and bars.

In addition to the scrumptious cakes from the oven, the bakery now offers a house-made soup as well as bagels from St. Paul Bagelry. If you stop in between 8:00am and 12:00pm on weekdays (or 8:00am and 3:00pm on weekends), you can sit down for an omelette, pancakes, or other breakfast options. Neighbors will also be happy to hear that Cake Eater still offers Intelligentsia Coffee to curb a caffeine fix. Moore Harris said that there are now options for vegans and vegetarians, as well as options for people who need to grab a lunch on-the-go.

“I know we will lose some customers because we are no longer doing cupcake catering, but it’s a tradeoff,” Moore Harris said. “I think what we offer now is a good, varied menu with something for everyone.”

According to Moore Harris, the most challenging part of the re-envisioning process was the short period of time in which she and her staff had to close and reopen with an expanded menu. “The first day was rocky, but I see us getting more efficient everyday,” she said. Though the reopening was difficult, Moore Harris reported that the multi-talented staff of Cake Eater remained very close and worked very hard to ensure the bakery’s success. “I’m the luckiest boss in the world,” Moore Harris added.

The future of Cake Eater looks very bright as more breakfast and lunch items are constantly being developed and improved. Fruit pies, tarts, cold salads, as well as house-made pickles and condiments are all slated to be offered in the Bakery within the next few months. As the snow begins to recede in the early weeks of spring, Moore Harris said she is excited to make full use of her bakery’s garden area as well as offer outside dining to all patrons. “We adore our neighbors and we want to drink iced coffee with them once again,” Moore Harris said.