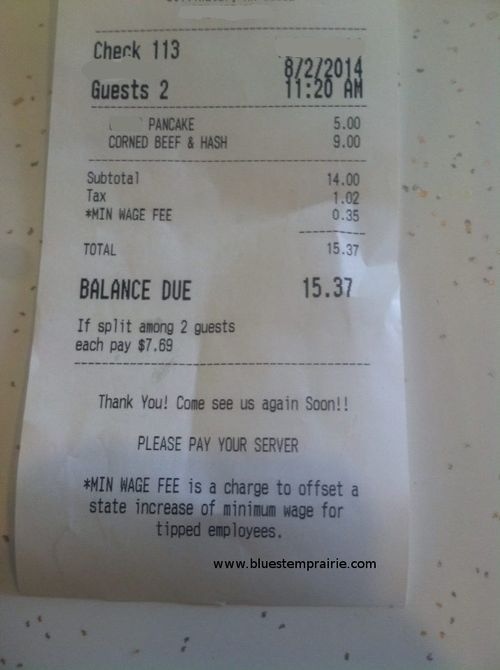 A reader sent Bluestem the photograph of a tap from a restaurant in the east metro, to which a “minimum wage fee” of thirty-five cents has been tacked on to a fifteen dollar tab.

Let us emphasis the “tacky” in tacked-on petty resistance.

The restaurant industry had tried–but failed–to make the case to the Minnesota legislature for a “tip credit” system under which wait staff could be paid less than the new minimum wage. New legislation raised the state’s minimum wage to $8.00/hr on August 1, with new raises for workers until the wage is $9.50/hr in August 2016.

In June, Governor Dayton created a kerfuffle when the Rochester Post Bulletin reported that his sons made a strong case for such a change in the new law; the statement was later clarified as the administration rapidly walked it back.

For reasons why the case for the tip credit failed to being with, we recommend trying to follow one advocate’s testimony at Lobbyist thinks BSP post “one of the stupidest articles I have read,” wants to buy us a drink.

That presentation, however, is statesman-like compared to this pettiness, and we have to wonder how many others will reflect, as we did, that thirty-five cents split between two diners at breakfast is too great a burden in the effort to make work pay.