They don't call him Rollie for nothin'!

Let me preface this by saying that I am not generally a hip-hop/rap fan. I like the genres, but only usually in its most disjointed and non-traditional form. I’d say that Arca is one of my favourite hip-hop groups and Slim Twig is my favourite rapper, if that gives you a better sense of my tastes. That being said, I enjoyed both acts that played this show.

I’m under the impression—and correct me if I’m wrong—that Ecid was slated along with Xavier Marquis (both local rappers) to open for this show, but only Xavier Marquis (AKA Xavier Marquis Davis) made it into the final schedule. Marquis is a man, not a band. He has six backing vocalists and musicians backing him on stage, so it made for quite the tight setup in the Entry. I arrived shortly after the beginning of the set to be greeted by a semi-cover of Silversun Pickups’ Lazy Eye. The band played the instrumentation while Brain Aubert’s distinctive vocals were streamed through the speakers. Marquis rapped in between Aubert’s vocal styling. His rapping style is not wholly innovative or interesting to me.

It’s apparent that Marquis has been working on music for a long time, but it wasn’t solely his rapping that made the show enjoyable. It was mostly the energy of not only everyone on stage, but the crowd as well. It was apparent that Marquis’ regular group of fans were there to cheer Marquis on, especially when the crowd cleared after Marquis’ set was over. The music itself was again, not wholly complex or interesting but they all knew how to keep electricity zipping through the air. All of the musicians seemed to be technically talented but (and this is my mom’s observation as I couldn’t really hear it up front) Shaquille Lapree’s pitch was off the entire show. Perhaps it was, but she was one of the best frontpeople on stage. She made use of the 2-feet by 2-feet square that she was slotted into by dancing and slipping around the various drums, amps, and cords. One of the best points in the show was when Marquis (the man) took a hold of a floor tom and a cymbal and performed a quick and intricate drum solo. The end effect of this seven-piece was loud, but not wholly bad. They’re a good show to go out and see with a few friends, but I wouldn’t really devote myself to their music.

I’m going to preface this part of the review with a shocking announcement: I’m biased. If you know more than the average person knows about me, you’ve probably realized at this point that I have a certain kind of love for a lot of up-and-coming Canadian musicians. The motive for my first listen to Cadence Weapon was a remix that Doldrums did of his song (and “hit”), “Conditioning.” Cadence Weapon (or Roland Pemberton), uses samples in his music that are not particular of a traditional rapper. I mean, he sampled the presidential debates. There was a fantastically hilarious “binder full of women” sample being looped during the end of the show. One reviewer from Canada’s The Globe and Mail said this about Cadence Weapon’s latest album Hope In Dirt City: “If he would just stop being himself, Rollie Pemberton… would be lighting up the charts. But Cadence Weapon likes skronky saxophone solos.nerdy references… and skewering rappers’ follies.”And it’s true. Cadence Weapon’s on-stage personality, technical skill, and attitude towards his music are all things that would push him towards the center of the popular rap radar. But that’s not where he’s meant to be. All of the characteristics of Cadence Weapon’s music that deter the mainstream-rap lover give complexity and interest. His topics of discussion indeed play on the classic hometown and party themes, but not in ways you’d expect. His backing tracks (which are live mixed by Tim Hoover a.k.a. DJ Co-op) are diverse and interesting.

Some rappers treat their beats as simply that—a background to their poetic focal point—but I believe that the best rappers know how to be compelling with their beats as well as their rhymes. In “88,” Pemberton raps about life in the city over a track produced by Montreal’s pop princess with a love for Marilyn Manson, Grimes. The track is also in Grimes’ song “Eight.” Following the semi-industrial and fast-paced “88,” Cadence Weapon launches into a song called “House Music” which is backed by, you guessed it, house music. According to the lyrics “this song’s about beats, streets..”. Pemberton’s rhymes are heavily influenced by the arts scene in both Montreal and his hometown, Edmonton. “Hope in Dirt City,” the title track of his new album, is mainly about his life in Edmonton before he moved to Montreal.

The icing on the cake though was the entire mood of the performance. The crowd was impressed by Roland’s speed and skill, and he was feeding off of that energy, laughing, staggering around, and laying on the floor for a bit. It’s key for any rapper and any musician to understand that it’s not just about playing or rapping, it’s about performing. Both Cadence Weapon and DJ Co-op took the show seriously whilst not being serious about it at all. This was shown by the aforementioned “binders full of women” sample and an especially amusing bit in “Hype Man” where the music stopped and Rollie made a theatrical statement in DJ Co-op’s direction that he doesn’t need a hype man. Those who stuck around after Xavier Marquis’ set were treated to an exhilarating set conducted by Cadence Weapon. If he’s back in town any time soon, I suggest you come along for the show. 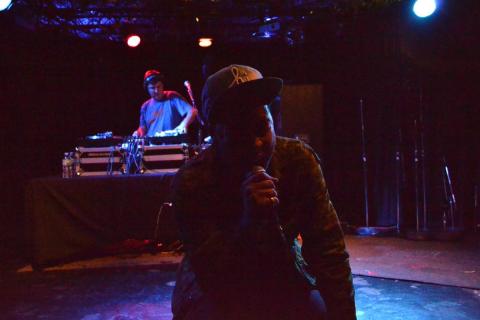 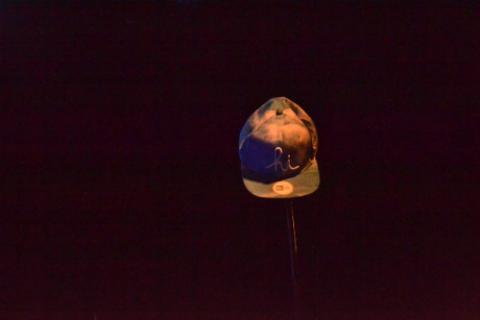 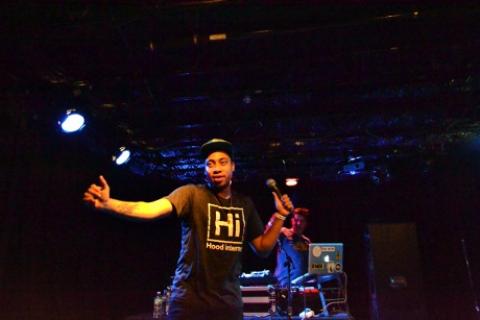 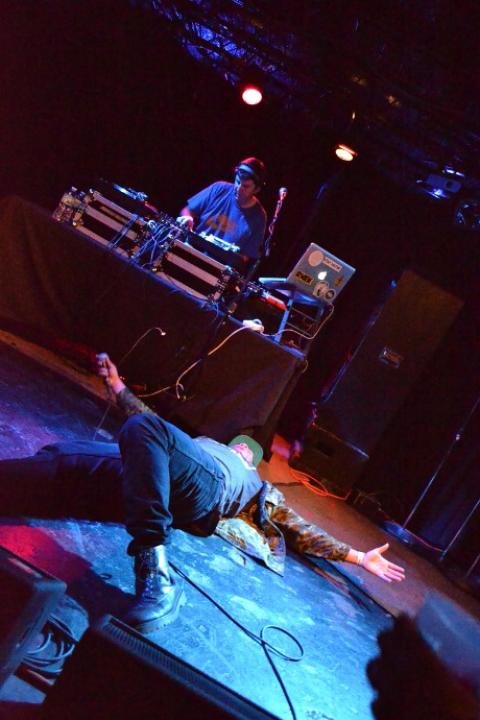 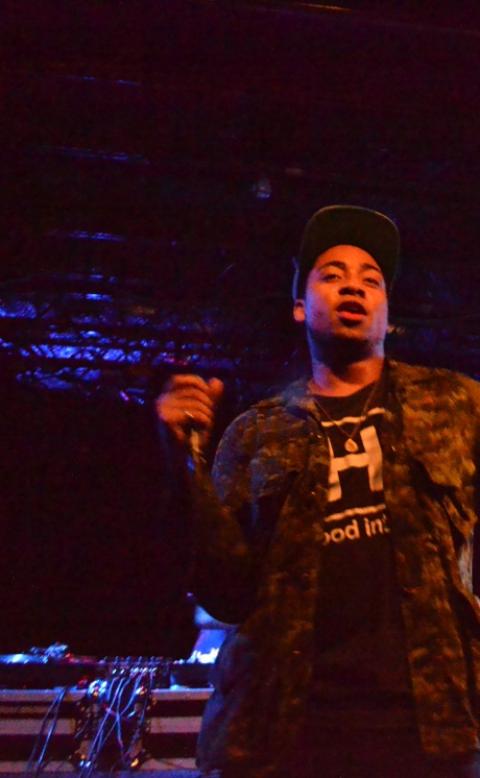 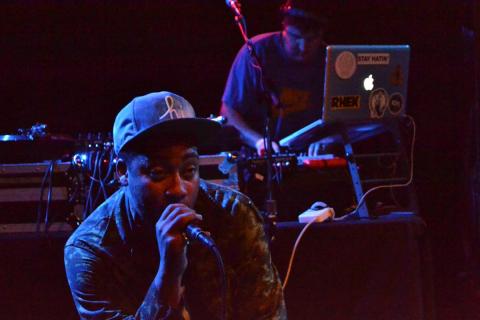 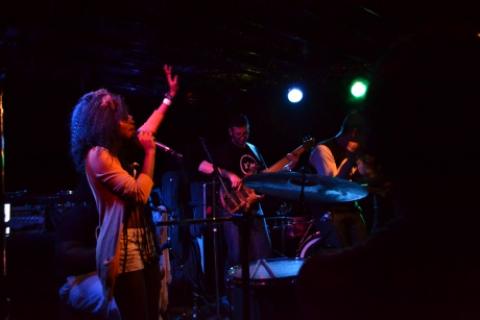 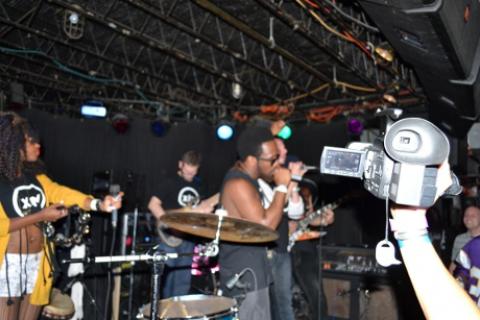 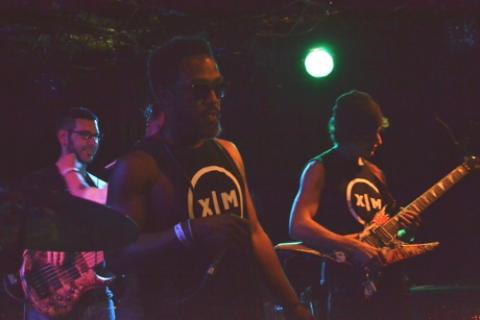 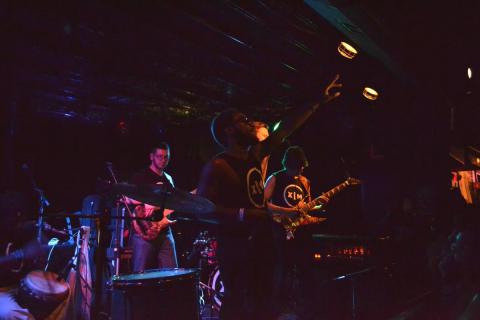