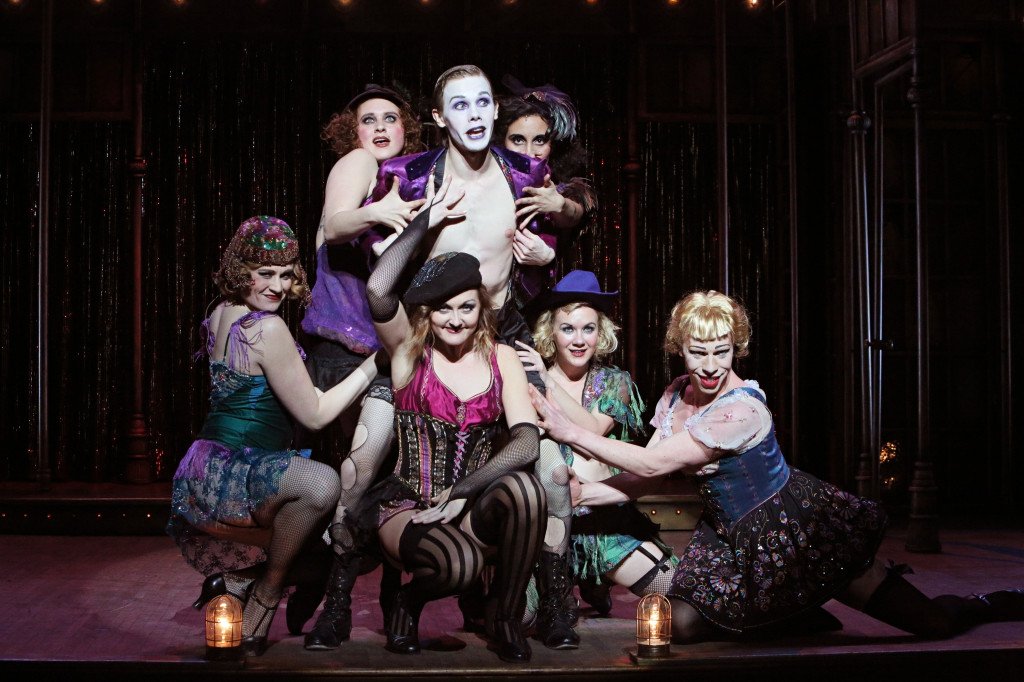 *This post contains some spoilers for some of the more dramatic moments of the show. If you’re the kind of person who likes to see your musicals unspoiled, proceed with caution.

I’ve seen a lot of theater—especially musical theater—in my life, but I don’t usually write about it. Because of that I’ve struggled these past couple days to write a review worthy of this show. Simply put: Theater Latte Da and Hennepin Theater Trust’s Cabaret is extraordinary.

The whole cast is stellar in their roles, including Sally Wingert, a Guthrie regular and the Star Tribune’s 2013 Artist of the Year. But the star of the show is the cabaret’s emcee, the amazingly talented Tyler Michaels. (Full disclosure: Tyler is a friend of mine, but read ANY other review of this show and you’ll see that I’m not alone on this point.)

I’ve known about Tyler for two years now, having watched him perform with Bearded Men Improv at HUGE Improv Theater, where he always plays dynamic and compelling characters—from a Caribbean deckhand on a pirate ship, to an innocent young schoolboy, to a wily septuagenarian grandma. Having seen him sing, dance, and move his body in countless incomprehensible ways on the improv stage, I knew going in that Tyler’s unlimited talents were perfect for the playful, spirited, sexually indiscriminate emcee of the Kit Kat Klub.

The show focuses on events surrounding the Kit Kat Klub, a cabaret club in Berlin in the dying days of the Weimar Republic (That’s 1931 in case you need a history refresher). It starts out as a fun and raunchy view into this bohemian underbelly of Berlin. “Leave your troubles at the door,” the emcee says. But by Act II the Nazis have started their ascent to power and those troubles can no longer be ignored.

Much of the Nazi imagery in the show certainly made me uncomfortable. At the end of the first act they showed real video footage of Hitler youth cavorting in fields. During the second act the whole cast gives the Nazi salute; a brick gets thrown through a Jewish shop window, and more. I asked Tyler if any of it ever got uncomfortable and he said that’s sort of the point, especially for his character. “The emcee is a provocateur, always challenging the audience.”

The emcee actually throws the brick through the window, but Tyler says, “It’s not necessarily violent or aggressive from [the emcee’s] standpoint. He’s not doing these things because he is a Nazi, but because he’s challenging you to see these images, or to watch this story.”

“He’s sort of this character that exists outside of the world of the play… He focuses the lens on this story.”

The show is not just about Tyler, though. The whole cast brims with a barely contained energy that’s magnetic. Kira Lace Hawkins is mesmerizing as Sally Bowles, no more so than during her manic, hysterical rendition of the show’s title number. The relationships are all believable, and the ensemble dancers bring a frenzied energy that easily gets us through the slower moments of the show. Major mazels (as the Jewish shop owner Herr Schultz says) go to choreographer Michael Matthew Ferrell and director Peter Rothstein, as well as costume designer Rich Hamson and set designer Kate Sutton-Johnson.

As a fifth-generation American Jew I immediately recognized myself in Herr Schultz. He stresses multiple times that yes he’s Jewish, but he’s also German—born and raised. I couldn’t even tell you for sure from where my ancestors emigrated. Where else would go if I was faced with the same choice as Herr Schultz?

But with the Holocaust over, and the Cold War also behind us, I asked Tyler his thoughts on what the relevance of this Nazi story is for modern audiences, and we talked about how its message is about how long can you feign ignorance or turn a blind eye to hatred. Today we see that in the treatment of Syria, in the NSA controversy, and continued anti-Semitism.

There’s a song-and-dance number in the show where the emcee dances with a gorilla. It’s a tongue-in-cheek love song about how he’s fallen in love with this gorilla—until the end when he says, “If you could see her through my eyes, she wouldn’t look Jewish at all.” It’s easy to see how “Jewish” could be substituted for gay, fat, or even black—where well-known European soccer players still actually get taunted with monkey chants.

All told, I was blown away by Cabaret. The juxtaposition between the light, fun, raunchy cabaret in the first act, and the impending doom of the second act was truly stunning, in every sense of the word. Those with big musical numbers in the second act deserved rousing applause, but got none, because clapping for a song like “Tomorrow Belongs to Me,” would’ve in essence been clapping for Nazism. I found myself thinking, ‘This is just a musical—I should clap for that beautiful song.’ But it just felt way too real and unsettling.

In two hours Tyler’s emcee guided us through a lively cabaret at the beginning, to the end, where he’s all that’s left. Everyone else has shuffled off into the mist—that singular Nazi mist—creeping over the stage.

Photo: Tyler Michaels and the cast of Cabaret (2014 © Michal Daniel)