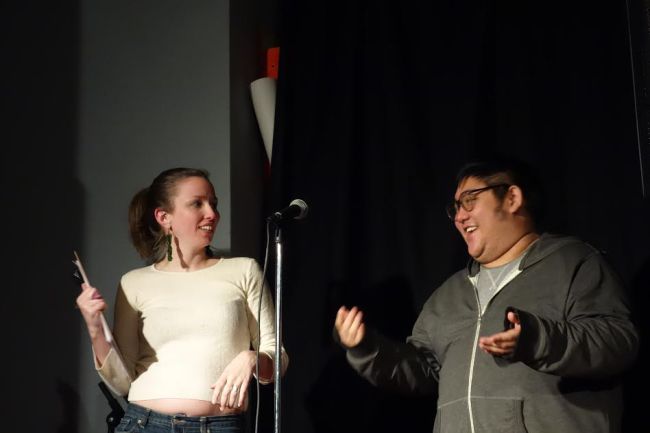 Last night I took a few moments to kick the stalactites from behind the tires of my car and to reconsider my outing before driving on roads that were better suited to ice skates. It was the kind of evening I could have spent near the wood stove with a blanket and a television remote. But I was motivated. There was a not-to-be missed roster of poets performing at Fox Egg Studio, a small storefront on 37th and Chicago Avenue, that included Donte Collins, IBé and Wang Ping.

When I arrived I met co-hosts for the evening, Inside Voices series curator Hieu Minh Nguyen and event director Sarah De Mulder. They are part of Button Poetry a youthful poetry collective that is active in promoting spoken word and poetry events, producing video and audio documents and doing things in a way that filled the gallery last night with a crowd of enthusiastic poetry lovers.

Hieu described Inside Voices as “a reading series that showcases poets, performers, and poems whose words thrive in any medium or venue.” And with that broad definition, first up was Donte Collins. He is young and he is proof that talent doesn’t always wait until you’re grown up to shine. He performed a piece he described as his own take on poet Patricia Smith’s “13 Ways of looking at 13,” and he finished with a spoken word poem about the private and tortuously sexy side of having a crush. 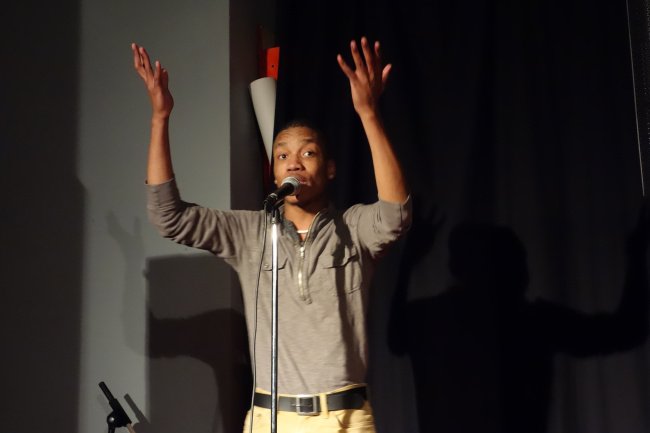 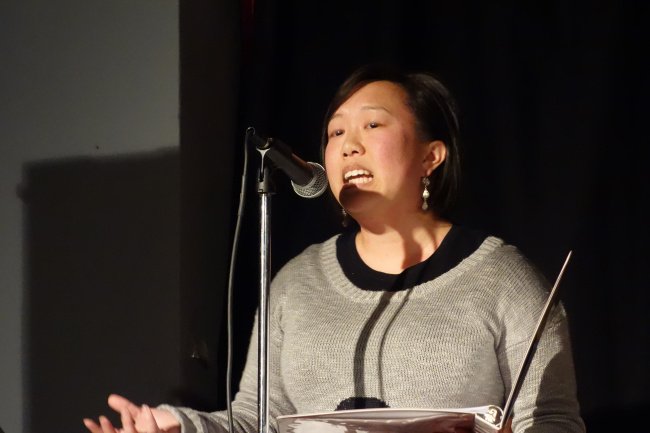 The crowd was warmed up and ready to welcome the affectionate but bittersweet family history recounted by Mimi Nguyyen. She spoke about the particular type of longing for things only imagined as the daughter of immigrants from Vietnam. She evoked the scraps of memory that she had inherited and that helped her picture what was left behind–the color red, the sound of firecrackers and the taste of certain foods at Tết, the lunar new year. 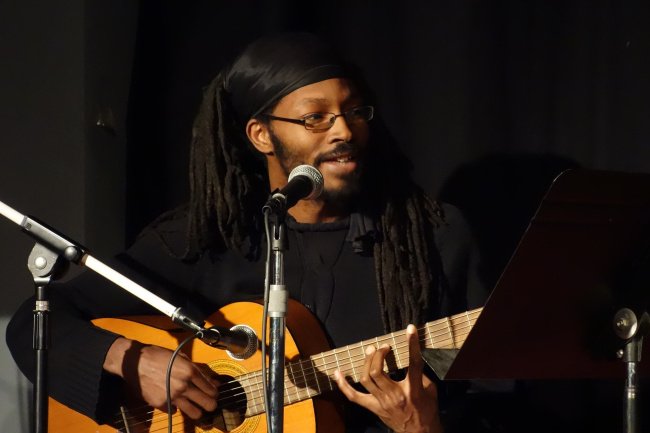 Khari Jackson, a poetry slam champion, took the stage with quiet confidence, setting himself up with a guitar and sliding with ease into the persona of Lead Belly in “an open letter to Curt Cobain,” telling him how deep and difficult it really is to sing another man’s song, like “In the Pines.” His performed two more pieces “Frieda in Detroit” and “Isis” both of which twisted and twined together artistic mythos with gritty reality. 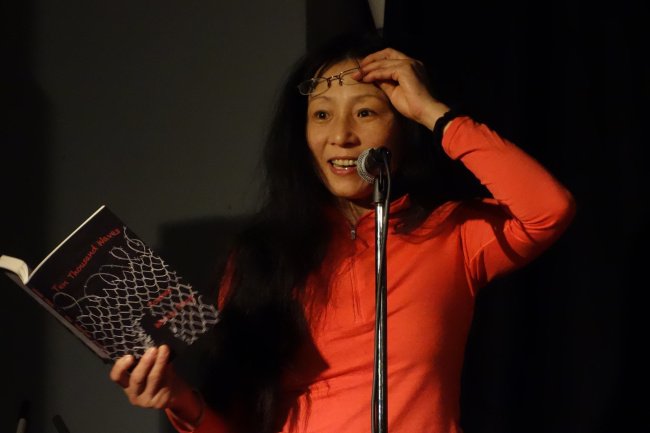 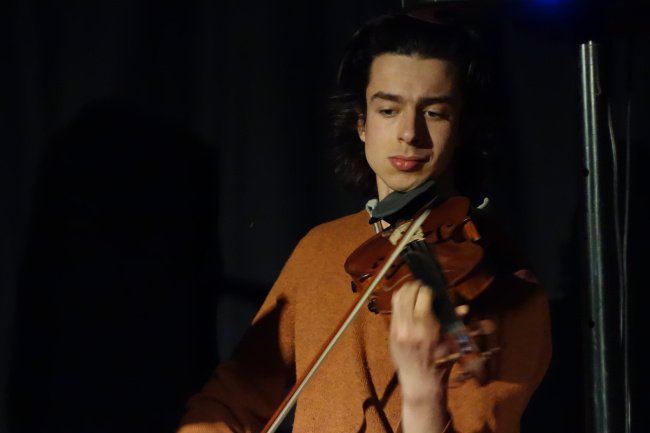 Ping took the stage next as the first of the two headliners for the evening. She read four poems, accompanied by Nick Whittredge, playing somber tones on the violin. All of the pieces are from her just published book Ten Thousand Waves (Wings Press). Each one, like “A Hakka Man Farms Rare Earth in South China,” draws the curtain back for a glimpse at the peasants who labor, using primitive methods and tools, to harvest the minerals that are used in technology or to produce the trinkets that are consumed by voracious overseas markets. She spoke poignantly about how, even in Tibet where she brought her international art project Kinship of Rivers, the drive to consume natural resources is changing the landscape. 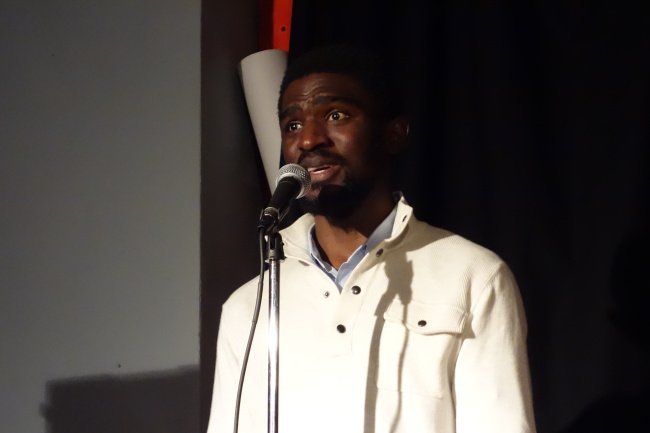 The last poet of the evening was IBé. Standing tall with his arms stretched to the ceiling, he recited his poems from memory, his sing song tones evoking places in Africa where he has lived. His poem set to the tones of the call to prayer from the mosque next door to his home compound in Guinea became a metaphysical musing on life. His piece that began with colors, “I think green…,” became a treatise on the multitude of colors and elements that can be mixed and that in American society frequently don’t mix. He recited pieces that spoke to future generations so they would know the stories that brought them from one place in the world to another.

It was an event worth its weight in snow and ice. We topped it off with Juicy Lucys from Matt’s before warming up the car engine and heading back across the river to Saint Paul. The weather may be cold but the poetry scene in the Twin Cities is hot. 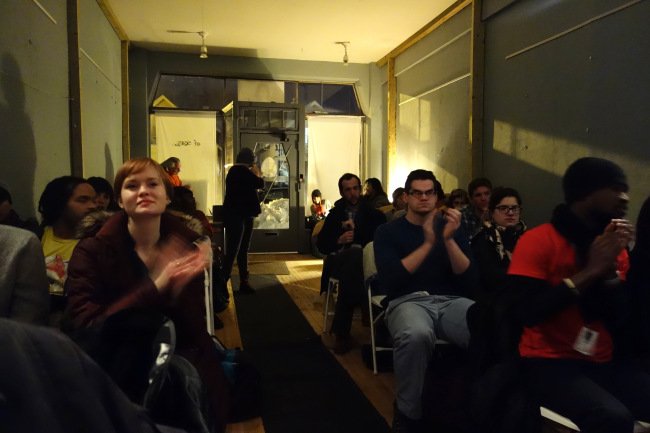 The crowd at the Button Poetry Event at Fox Egg Gallery