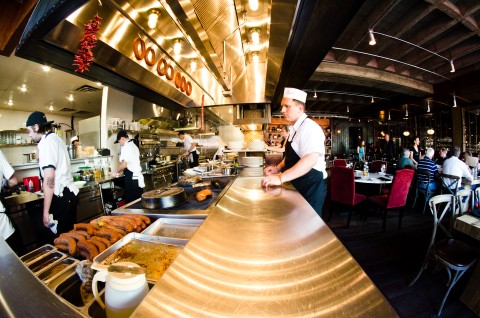 There is something blunt, almost brutal, about the name of Jack Riebel’s new restaurant The Butcher and the Boar. While most meat emporiums take names that distance themselves a bit from the living animal (The Capitol Grille; Morton’s Steak House), the Butcher and the Boar conjures a confrontation that is going to end badly for one of the parties. There will be blood. And sausage. And wild boar ham and head cheese.

The eating of meat has been, at least in many quarters, problematized—a fancy word for taking something that is taken for granted, and turning it into a subject for ethical deliberation and debate. See, most recently, the essay contest sponsored by the New York Times, which challenged readers to come up with an ethical defense of meat eating.

Many of the Twin Cities’ trendier restaurants respond to this challenge by sourcing and labeling their meat and animal products in some way that helps the customer negotiate a morally acceptable solution or compromise. (“Well, at least this Thousand Hills grass-fed cattle / Kadejan chicken got to spend time outdoors and eat a healthy diet…”)

The Butcher and the Boar will have none of this. Dive deep into their website, and you will find a statement of their philosophy: “Fresh and high quality ingredients are a top priority.” That’s it. Nothing about sustainability or grass-fed or free-range or factory farming. If you are dining at the Butcher and the Boar, you know why you are here and what you want.

I am able to put my ambivalence about meat-eating aside for at least a few hours at a time, when it’s convenient or the meat is especially tempting. (For example—full disclosure—at the Daily Planet’s Sausage Fest fundraiser last February, to which the Butcher and the Boar brought a generous assortment of delicious artisanal sausages.) A section of the Butcher and the Boar’s menu is dedicated to these sausages, including a wild boar hot link, Texas beef link, 101 Bourbon sausage, pinto bean chorizo sausage and catfish boudin, all priced at $12, with various garnishes.

The first time I dined at the Butcher and the Boar I went with a meat-loving friend, and we shared everything—an order of garlicky, sumptuous wood-grilled oysters (three for $11); a juicy and succulent Berkshire pork and cheddar sausage that oozed melted cheese when we cut into it; and finally, a tender, meaty smoked beef rib for two, glazed with a spicy Tabasco molasses barbecue sauce.

But on a return visit, I was eager to try more of the non-meat items. The steamed Maine mussels in a creamy broth of blue cheese and smoked leeks ($14) were small but succulent. Calling the seafood stew a shellfish booya ($21) might give it a more macho campfire aura, but this is really a rather delicate and delicious bouillabaisse, comprising clams, mussels, shrimp and small chunks of fish (mahi mahi, perhaps) is a clear but pungent seafood broth. We also shared the Berkshire pork chop for two, as juicy and flavorful a cut of pork as I have tasted in years.

A note about portions. It seems to be the fashion at steakhouses to serve meat in gargantuan portions at astronomical prices—e.g., Manny’s 50-ounce Bludgeon of Beef, a bone-in ribeye currently priced at $85.95. That may be an extreme case, but 24-ounce steaks are commonplace. Think of it as the high-end version of Supersize Me culture. It’s a safe bet that much of that meat winds up in doggy bags.

The Butcher and the Boar does not follow that silly fashion. Both the beef rib ($32) and the double pork chop ($27) were billed as entrees for two, although they were comparable in size to single servings at other meat-centric restaurants. That is, they were a sensible size for two normal human beings to share. The drinks menu offers the biggest selection of premium bourbons I have ever seen (also offered in tasting flights), plus lots of artisanal beers on tap and a wide-ranging list of wines by the bottle or glass. We didn’t manage to save room for dessert, but the s’mores ($7) and gingersnap banana pudding ($7) sound tempting.

On both visits, the restaurant was packed—and that was before Rick Nelson’s four-star review in the Star Tribune—but service was always friendly and attentive. 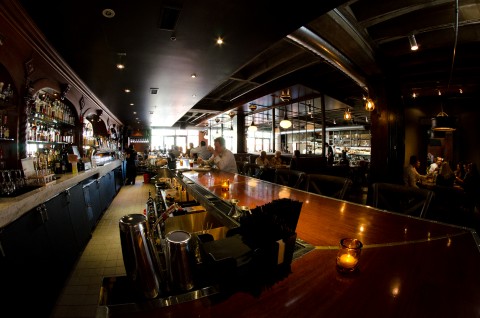 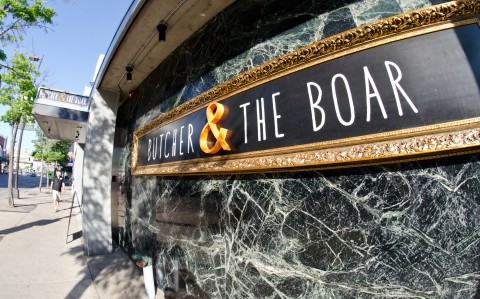 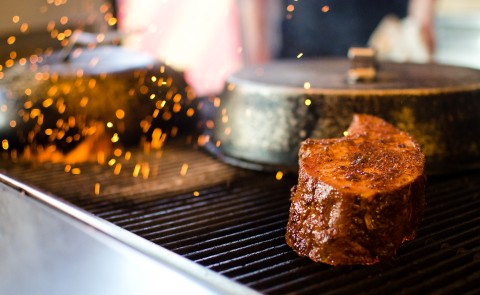 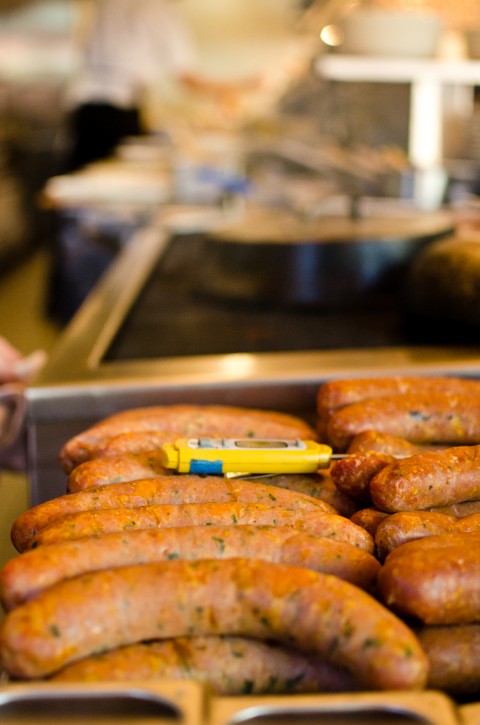 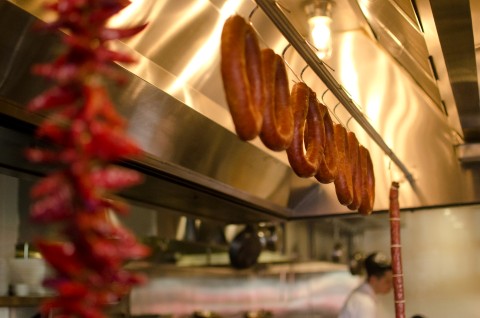 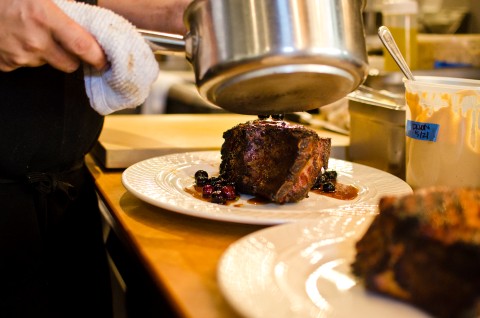 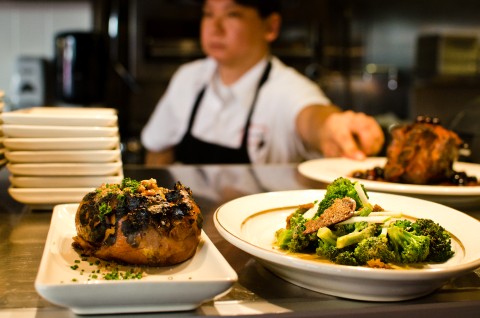 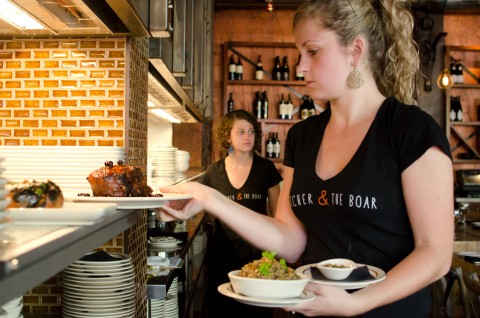 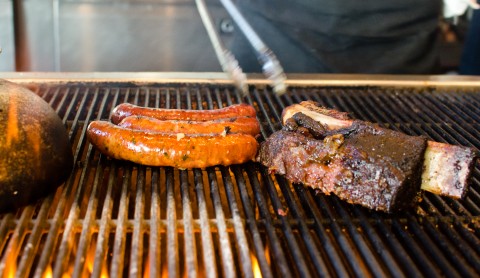 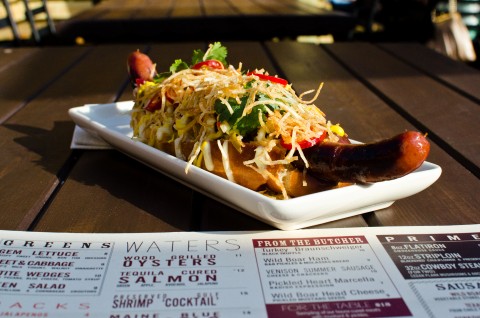 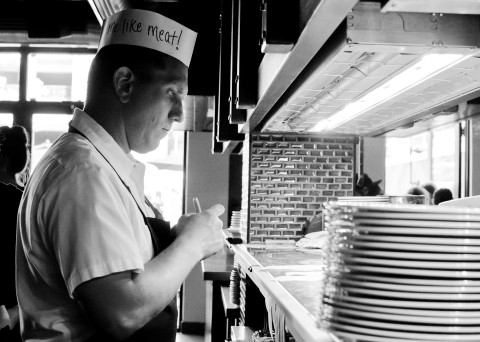 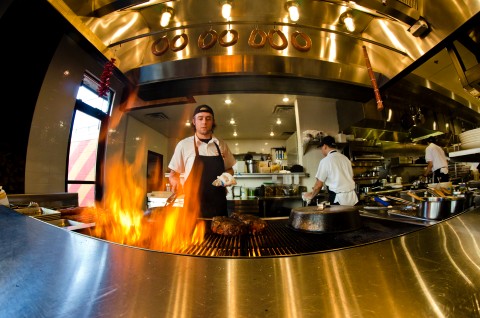 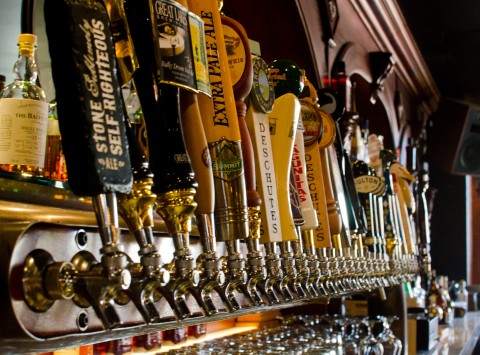