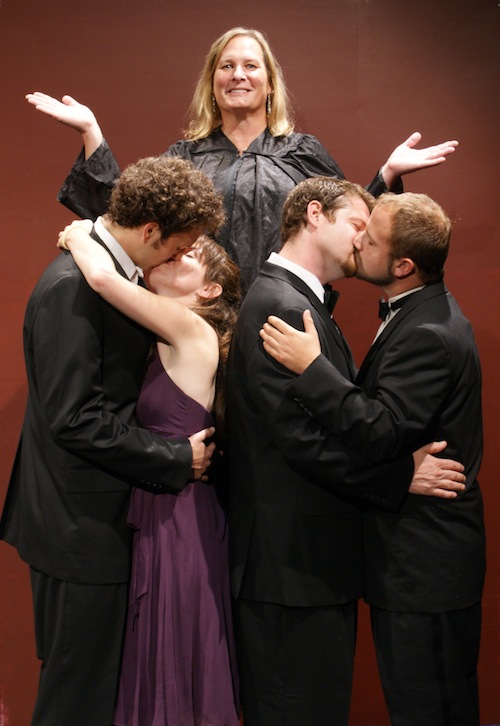 A brother and sister plan a double wedding with their respective straight and gay boyfriends in the church where they were brought up, only to find that a day that is supposed to be about happiness and celebration is tainted with protests and violence. Daily Planet contributor Matthew A. Everett’s But Not for Love comes right before the election in which Minnesotans will cast their votes about whether to pass the discriminatory marriage amendment. The co-production between The Flower Shop Project and Workhouse Theatre Company also aims to raise money for Minnesotans United for All Families, but it is not a purely political play.

The play begins on the wedding day of Eleanor (Jen Rand) and Roland (Paul Rutledge) as well as Eleanor’s brother Ephram (Foster Johns) and Patrick (Jeremiah Stitch). The happy day is complicated by the fact that Patrick’s brother Jacob (Carl Atiya Swanson) is leading a protest outside. Duke (Shawn Eric Hoffman) is the cop who comes to keep the peace, and Duchess is the trans woman who is to preside over the wedding.

The title comes from Act I Scene I of As You Like It, when Rosalind declares “But these are all lies: men have died from time to time and worms have eaten them, but not for love.” Indeed the play borrows much from Shakespeare’s comedy, including a riff off the famous love quadrangle between Phebe, Orlando, Rosalind, and Silvius, where “And so am I for Phebe/ And I for Ganymede/ And I for Rosalind/ And I for no woman,” is translated directly using the central characters in “But Not for Love,” namely Eleanor, Roland, Patrick and Ephram.

The play also borrows the character of the Duke from As You Like it, with a cop whose name is Duke (he has a daughter named Olivia), who falls for Duchess, a trans woman whom Duke doesn’t realize is trans at first.

I really liked Everett’s use of As You Like It as a frame for the story. It elevates the material from being too didactic, offering some interesting metaphor and color. The Forest of Arden becomes a place of banishment, but also of freedom and love.

Also, Everett is good at writing interesting characters, and the script is peppered with some very funny lines. That’s not to say that the play never meanders into rhetorical land: there are moments when the characters are talking too much about their thoughts and feelings rather than showing them, but for the most part I thought it plays the line between creating an engaging story and getting a point across quite well.

I really enjoyed Jeremiah Stich’s performance as Patrick; there were all kinds of layers of emotion that he’s able to portray, from pride to fear to empathy as well as humor. The scene between Patrick and Ephram where they remember the first time they hold hands is bittersweet and heartbreaking.

I have to say, though, that Erica Fields really steals the show as Duchess. She’s just so funny and sweet and vulnerable, you totally believe that Duke falls in love with her, and in the end doesn’t mind that she used to be a man. I think those scenes worked the best because they were showing action that was occurring right before our eyes, rather than talking about what just happened, or about the political issues.

Read Matthew A. Everett’s But Not For Love program note, “Voting no is the least we can do”