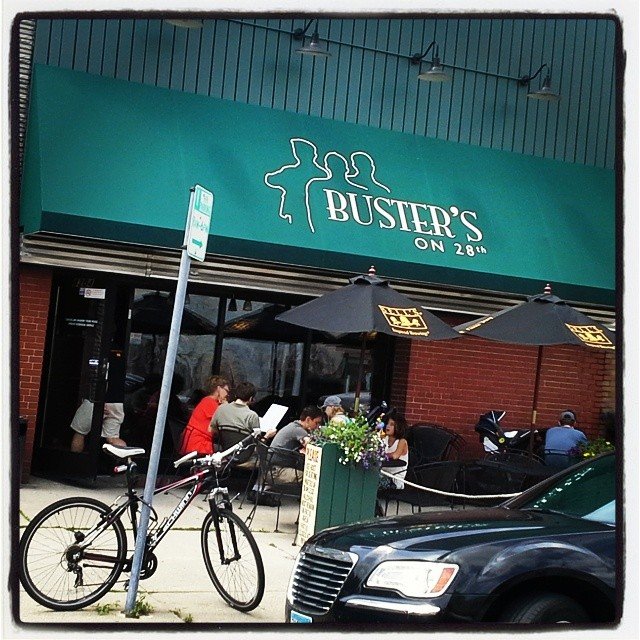 The patio announces the news: Buster's on 28th has reopened!

After over a year, Buster’s on 28th has reopened.

The popular restaurant closed after a fire during last summer’s “solstice storm” on June 21, 2013.

On the day of the fire, the power had been out on and off throughout the day, prompting Buster’s to close early. Luckily, by the time the fire struck, the gas had been turned off. Otherwise the damage would have been much worse. Most of the damage inside was from smoke, and electrical wiring also needed to be replaced.

Owners had initially hoped to reopen in February, but kept facing setbacks. On July 2, they announced via Facebook that the grand reopening would be July 10. “We appreciate your patience on this and no one is more heart broken than us on this minor delay,” they wrote.

During the rennovation, the kitchen was enlarged, the number of tap lines increased, and the restrooms expanded. This involved adding on to the rear of the building to make the restaurant slightly bigger.

In the middle of the process, owner Michael Stier posted on Buster’s Facebook page: “Thank you all for the support. Nick, Joel and I truly appreciate it. The support today from the neighborhood was awesome and reminded me of why we’ve always strived to be a ‘neighborhood’ place. We’ll do out best to keep our fans up to date on our timelines to re-open.”

Getting to Buster’s is a bit tricky this month due to the road construction along 28th Ave. The roadway is closed the two blocks north of Buster’s, but open in front of Buster’s. Take 42nd to 28th Ave. and park.

A nearby restaurant, 3 Tiers, quietly closed on July 6. The owners announced the closure on Facebook.

“It was five years ago that we set a goal to start up a small bakery and grow it into what it has become. …coffee shop, sandwich shop, wedding cake shop, beer and wine bar, weird Korean restaurant; basically whatever you wanted it to be. Now it is time for Bryan and Sarah to start another venture and explore what else life has to offer. …The decision to close is a voluntary decision, our amazing customers made 3 Tiers a financial success. It was a decision we made for our livelihood and happiness. Restaurants are a lot of work and we are excited to be able to spend more time with family and friends and maybe take a vacation!… We wanted to keep the news quiet so that all of you could enjoy 3 Tiers as is supposed to be; a friendly casual neighborhood place with no-wait (usually). We have been trying to sell our business for the past year and announced our closing it to our employees beginning of June. (Thank you employees for being so discrete and sticking around until the end). We have had some interest but nothing final yet on paper – so if you or someone you know wants to carry on the 3 Tiers Legacy or start up something bigger and better; let us know!”

Getting the gang back together