It’s only 10 jobs, but a California company’s Minnesota expansion is a strong arguing point for folks who say there’s more to attracting business than just low tax rates. 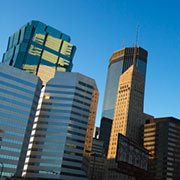 Terry Low, owner and CEO of Byte Technology, a 12-year-old privately-owned company, moved the headquarters to Bloomington from Monterey, CA. It usually follows that the headquarters of a firm is wherever top management is located, so this development is more a technicality. He has family ties here through his wife. But there is more involved in the move than that, he said. Byte Technology recognizes Minnesota has a business climate suitable for expansion.

In saying that, Low presents a broader and more accurate usage of the term business climate than the narrow definitions lobbies use when seeking subsidies, tax breaks or protections from state and local governments.

He likes what he sees about Minnesota’s education system, he said, and he wants to connect with various disciplines and departments at the University of Minnesota. He knows there is web design talent here as well, an important factor as he intends to increase employment here to around 10 or more people within the year. For Low, education and the talent pool are connected.

Minnesota’s leading positions in medical technology, food and agriculture, resource development and related business services are an attraction for firms such as his, he said. In turn, that helps create critical mass for a quality of life environment for him, his family and for his future employees.

Low said he would be getting his three-year-old son on skates this year to “enjoy” the indoor ice arena near his home. “We’ll learn to skate first. Then we’ll consider a hockey stick.”

A visit to the Minnesota State Fair, meanwhile, offered “an explosion of culture” that really makes for a fun “snapshot” on all that is Minnesota, he added.

Low and a brother started Byte in 2001 when the tech realm’s earlier dot.com bubble burst. The web design industry will go through a shakeout, too, he said, and Minnesota has already seen such companies come and go.

What Low said he is studying why some previous tech-related ventures didn’t work here, why some are doing well, and what future web design and other services our businesses, industries and institutions will need going forward. That’s the task facing all entrepreneurs and economic development promoters in Minnesota must assess strengths and weaknesses to participate in the 21st Century economy.