A wonderful Jazz combo from Augsburg College opened the 2012 Forum, first with a fine rendition of John Lennon’s Imagine, and Sting’s We Work the Black Seam Together.

It was a neat beginning to a superb day, jam-packed with thought provoking talks and workshops on the general topic of Business around the Forum’s theme: “The Price of Peace”. We came home very tired and very satisfied.

There is no adequate way to condense six jam-packed hours into 600 words or less. Here’s an attempt.

The first day was fully subscribed.

In the general sessions, Alf Bjorseth, chairman of Scatec As, gave a highly informative talk on “Renewable Energy:The Business of Renewing Peace & Stability”; Republic of South Africa Ambassador Ebrahim Rasool, discussed the role of business in stabilizing the wider world and local communities as well; at the close, South African Sakumzi “Saki” Macozoma, five year veteran of infamous Robben Island Prison, talked about Business and the Price of Peace in Post-Apartheid South Africa. 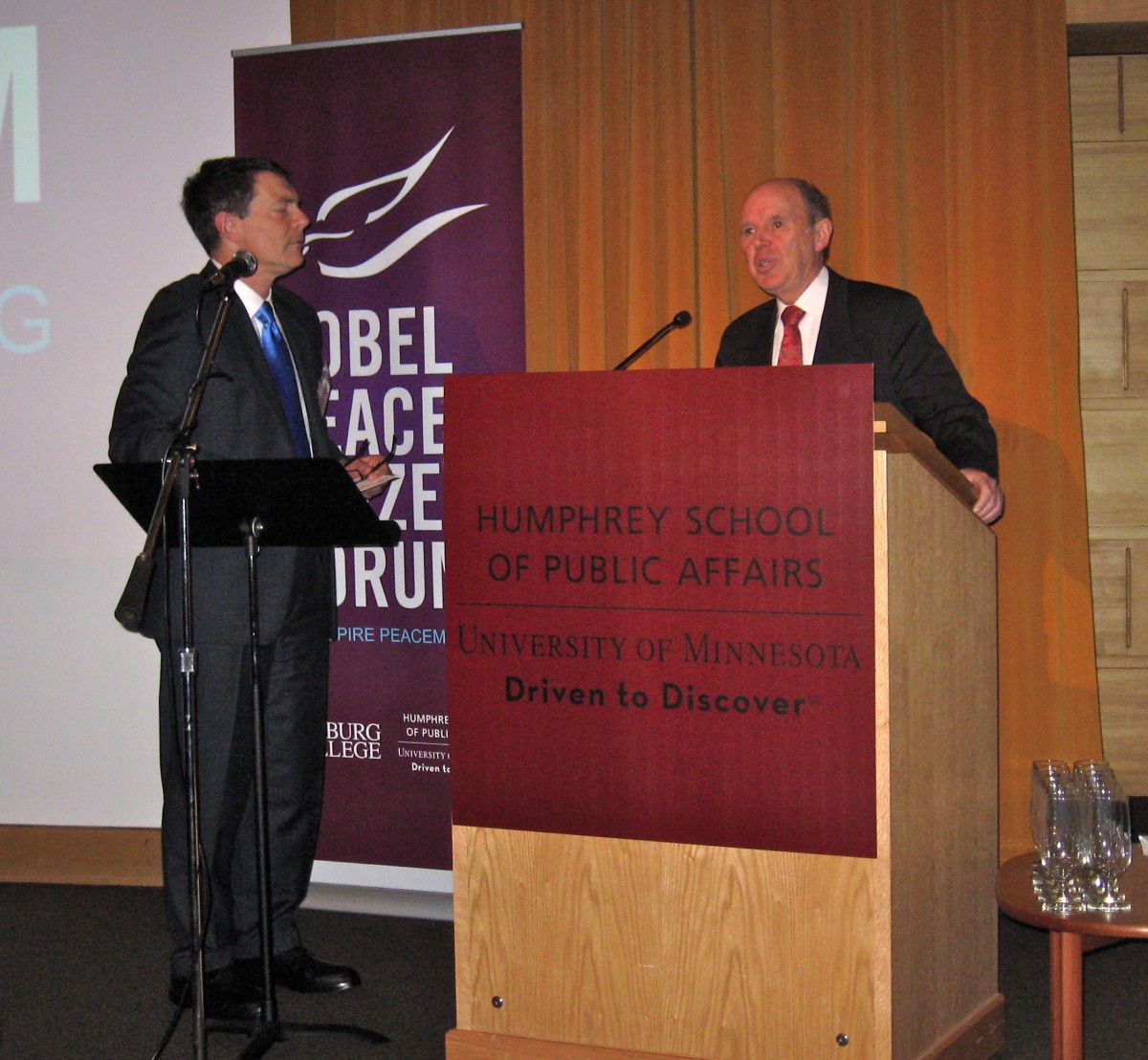 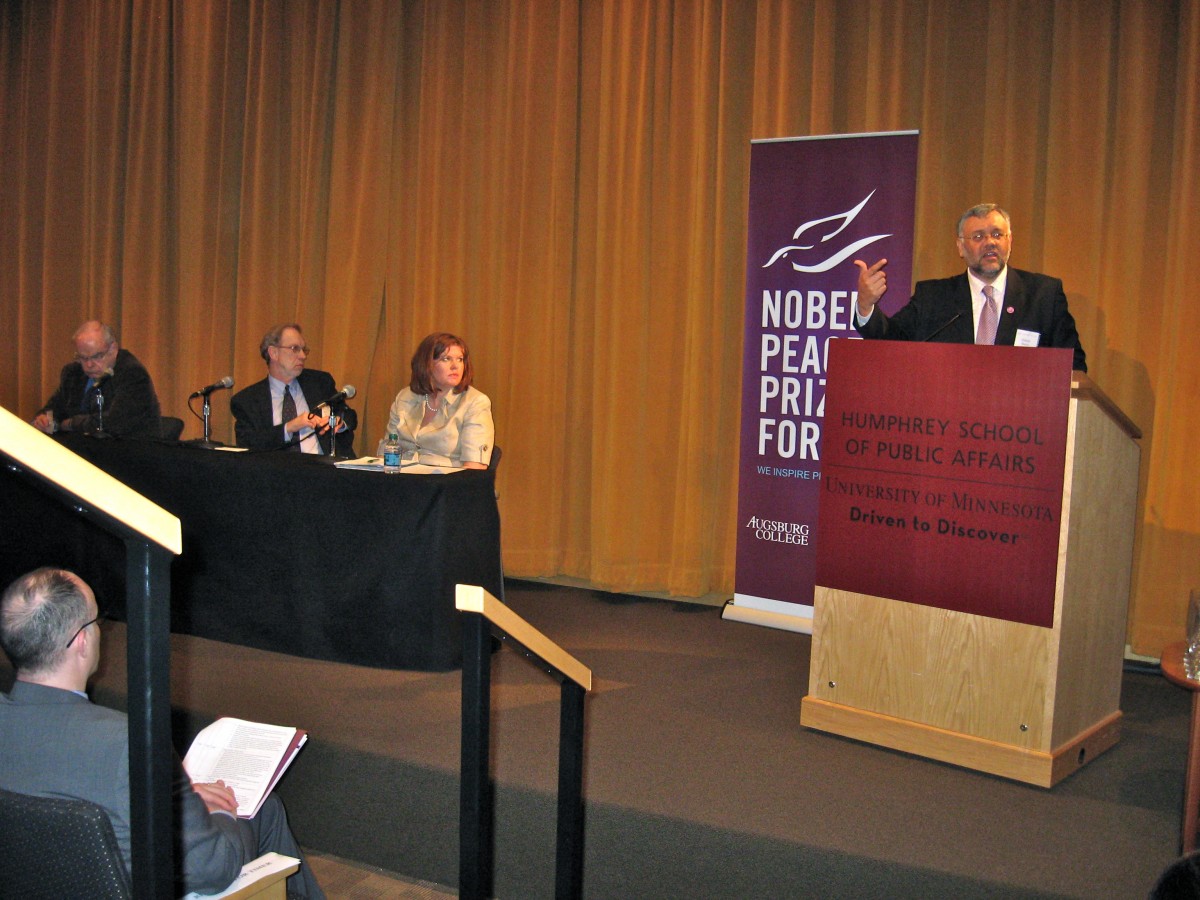 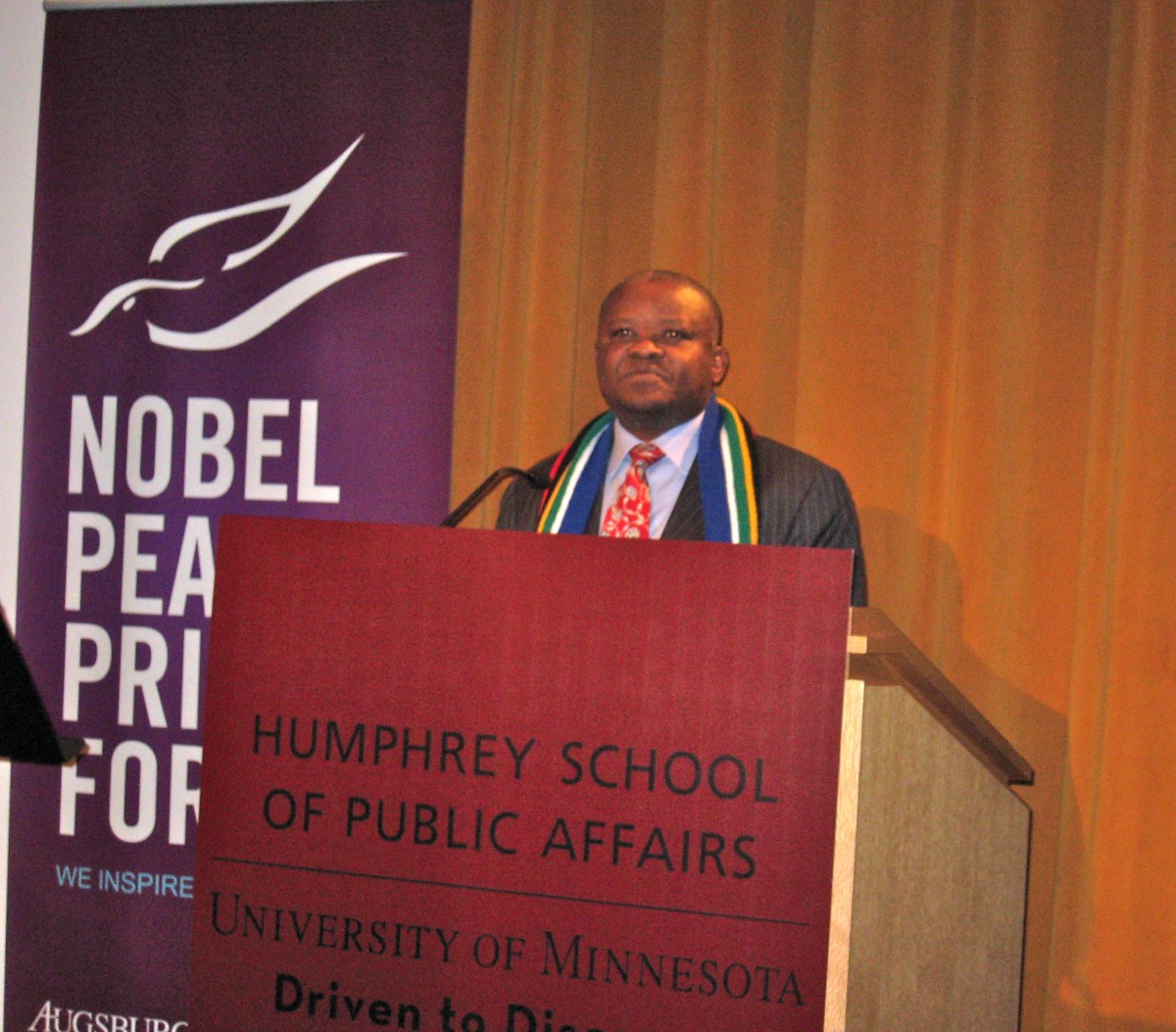 All three of these talks, which were live streamed around the world, are archived and are already available for viewing on-line at the Forum website. They are all well worth the time. Bjorseth and Macozoma’s talks were followed by q&a expertly moderated by CNN’s Johnathan Mann. Ambassador Rasool’s talk was followed by a responder panel moderated by Caux Roundtable founder Stephen Young and including Roger Conant (International Investment Advisor), Doug Tice (Minneapolis Star Tribune), and Carol Kitchen (Land O’Lakes).

The sessions for the next two days will be live-streamed as well.

Attend if you can. Register on-line here.

Between major sessions today were a wide array of workshops.

My choices were Business Innovators as Pillars of Peace; and Feeding 9 Billion.

The Feeding 9 Billion workshop was especially interesting, apparently pulled together by Land O’Lakes.

The meeting room was packed to standing room only, and after brief and interesting presentations by five very impressive people, one a native of Kenya, we divided into small groups.

I joined the group facilitated by Bob Beck, a Regional Agronomist (Illinois), Winfield Solutions. There were perhaps a dozen in his ‘circle’, and it was most interesting to note the demographics of our group, and the assorted opinions expressed on various issues relating to U.S. business assistance in other parts of the world. Two women in the group, one Ethiopian, one from India, had strong opinions; others fed in as well with assorted points of view. Beck handled the conversation very well.

Even in 15 minutes discussion, it was possible to conclude that the issues addressed are by no means simple. Words like “honesty”, “trust”, “government”, “business” swirled around. When you sit in circle with people of differing points of view you can learn something. Points of disagreement? Of course, there are those. In human society, where differences are where it’s at, in-person consideration of other points of view is essential.

South Africa has emerged as the informal general theme for this years conference, and Thursday and Friday I’ll hear F. W. DeKlerk speak. DeKlerk won the 1993 Nobel Peace Prize with Nelson Mandela. DeKlerk and Mandela together, and the imperfections of the last 19 years in S. Africa, demonstrate that reaching peace is hard work, and a forever process; slow, but better than the alternative.

Sitting next to us at today’s closing was a young Black man. My spouse struck up a conversation with him. He was a Fulbright scholar from South Africa….

Did we solve the world’s problems today? Will we tomorrow, or Saturday?

But it was great to be a participant in today’s Forum, and I expect the same Friday and Saturday.

Attend if you can.