Minnesota may be in the center of the country geographically, but economically it’s smack in the middle of world affairs, both from its Fortune 500 and business representation and from its growing immigrant population.

One might think China’s rescinding of its one-child per family policy or Saudi Arabia re-examining guest worker policies have nothing to do with Minnesota, but all of these global actions are connected locally, said Bruce Corrie, professor of economics and associate vice president for international programs for Concordia University in St. Paul.

Nations, states, and provinces are engaged in balancing talent needs with local demographics worldwide. Minnesota and most areas of the highly developed world have aging populations. The talents of immigrants and refugees are already needed and will become more important in future years when more people reach retirement age.

The one-child per household policy in China was causing a variant of “baby boomer” phenomena in America. One child will be working in future years when two parents enter retirement.

In Saudi Arabia and other Middle East states, crackdowns on illegal immigration and restrictions on guest workers come as nations attempt to lower domestic unemployment. In some cases, these efforts are intended to ease cultural transition for women entering the workplace and for resident people to take jobs that were left to foreign workers in the past. In yet other instances, new immigration policies are efforts to curb human rights abuses of indentured servants and guest workers.

Regardless of underlying reasons, countries across the globe are reexamining immigration policies to match local economic needs with “human capital,” or the talents the local economy and society needs.

Corrie has teamed with Sarah Radosevich, a policy research analyst with the Minnesota Chamber of Commerce, to support the soul searching and public policy evaluations here at home with a comprehensive study of “The Economic Contributions of Immigrants in Minnesota.”

Minnesota is part of the global economy; it needs the human capital and the economic stimulus brought by what Minnesota 2020 has dubbed “new Minnesotans.” We may be missing the boat by not encouraging greater business and trade ties to the home nations of our new neighbors.

What’s more, the authors use projections showing immigrants in Minnesota have an estimated $659 billion in lifetime earnings, have annual purchasing power of $5 billion, and pay $793 million in annual state and local taxes.

But all too often, Corrie said in an interview, opponents of immigration policies and of immigrants themselves look just narrowly at employment impacts on a specific business sector or extraneous issues (racism, religious bigotry, language and ethnic biases).

This is the problem that surfaces wherever immigration policies are addressed within the modern global economy—in North America, Europe or elsewhere.

Looking at just two areas covered in their report, the authors found Minnesota has a more diversified mix of immigrant than the U.S. at large. This mix could be tapped to foster new business and investment ties in emerging markets.

Using 2013 data from Migration Policy Institute, the report shows the following comparison of regions of birth of foreign-born population: 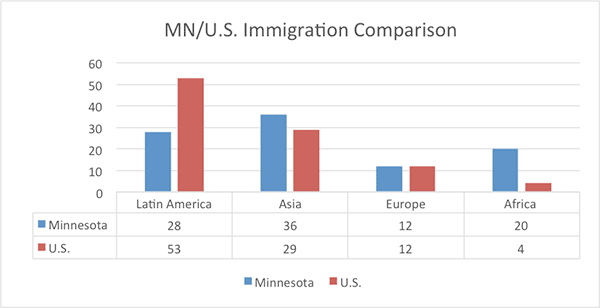 Forging networks within these global ties represents an underutilized and under-developed strength for Minnesota, Corrie said. He cites Brookings Institute studies that found Minnesota to be “asset rich” from its immigrant connections, but not “effectively tapping these assets to increase exports.”

Even without a concerted effort by state policies to foster such ties, the report noted 7 percent of Minnesota immigrant-owned firms derive revenue from exports while only 4.4 percent of non immigrant-owned firms do so. Moreover, without a strategy building on human capital strengths, the report notes that India-based CPI Banani is expanding in Winona, Tata Consultancy Services is expanding in Bloomington, and Essar Steel has a $2 billion development underway in Itasca County.

Corrie said he’s pleased that renewed interest is being expressed in promoting Minnesota’s multicultural strengths, from recent comments from Governor Dayton to local mayors and Chamber officials. This should extend to re-evaluating what Minnesota is doing to invest, long-term, in training and education for human capital development, he said.