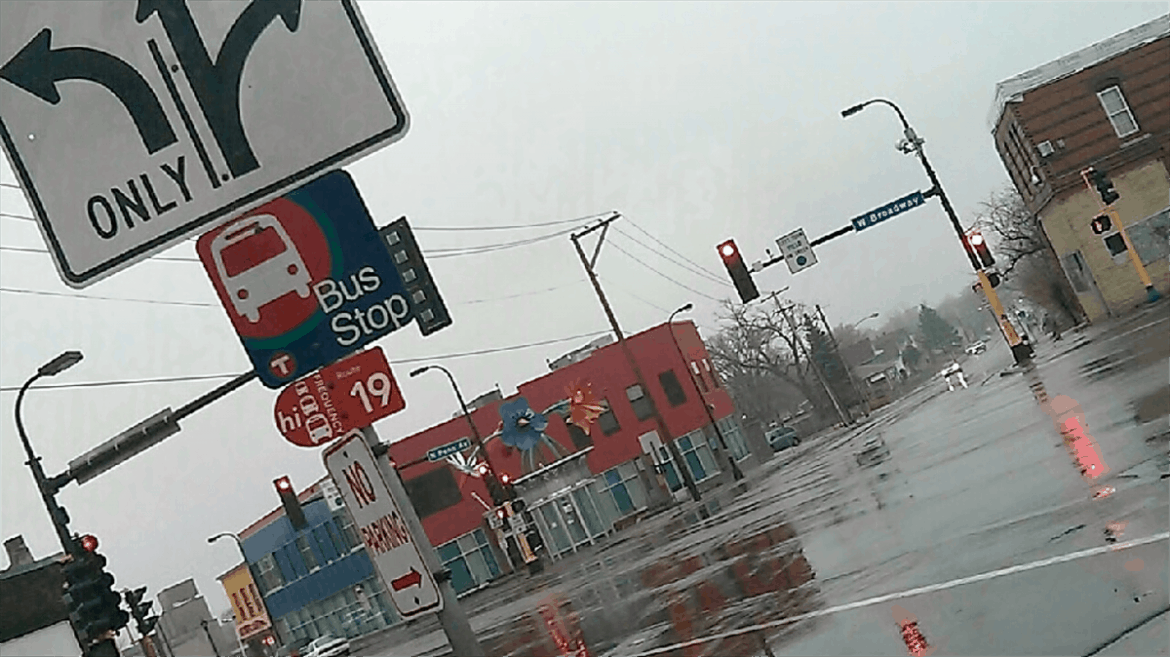 (All photos by Paige Elliott)

Metro Transit’s Route 19 served as the mobile stage for the debut of the Bus Stop Theater in North Minneapolis on Saturday, November 16. Kicking off from 44th and Penn Avenue, the cast and audience battled chilly temperatures and rain to transform four stops along the Penn Avenue bus route — 44th Street, Broadway, Plymouth, and Olson Memorial Highway — into an interactive theater experience and dialogue about the community.

The innovative theater project, created by Create Place, in partnership with Capri Theater and others, was designed to use art to engage the community and spark a conversation about ways to address city planning and transit issues in Minneapolis. For the price of bus fare, the audience was treated to actors and teaching artists performing various theatrical scenes from a script written by Capri Theater artistic associate Greta Ogelsby. The performance was followed by a facilitated discussion.

In keeping with the interactive nature of Bus Stop Theater, participants were given a coaster with a question about how to improve the neighborhood. They were instructed to pose the question to other passengers on the way to the next stop. The coasters were then collected, to be compiled and considered by the Minneapolis Department of Community Planning and Economic Development.

Attendee Ady Olson said she enjoyed the interactive nature of Bus Stop Theater, and especially liked the idea of using public space to create art and foster dialogue in the community.

When asked what she would change about the Penn Avenue corridor, Olson stated, “I’d like to see more spaces for people to dwell in the community, like more benches and places to sit, so people are actually using the space for more than just passing through on the way to someplace else.” Olson’s sentiment was echoed among other attendees, along with calls for more retails shops to help revitalize the neighborhood, and heated and better lit bus shelters.