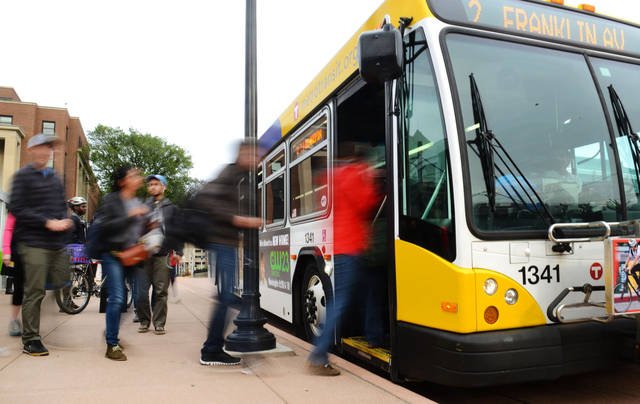 (Photo by Zachary Bielinski) Students and staff board a bus in front of Coffman Union Friday evening. A University researcher conducted a study on how different amenities at bus stops like hooded shelters, benches and schedules change how people perceive wait times.

Crowds of commuters flocked to the Coffman Union bus stop, patiently waiting for their ride to arrive, headphones distracting many of them from the buzz of the world.

It was 5 p.m. Monday — rush hour for University of Minnesota students returning from a full day of class.

While some students say they’re content with the Twin Cities bus system, many commuters associate waiting time at stops with unhappiness and unpredictability, according to a recent University study. The research, which examined perceived waiting time at bus stations, will inform local transit authorities as they create and redesign bus stops.

But for longer wait times, a bus schedule and a bench can help travelers feel like they aren’t waiting as long.

“The hope is that we can show that there is real value to amenities at stops and stations,” said David Levinson, a civil engineering associate professor and a co-investigator on the project.

Researchers expect to publish the paper in five months, after they collaborate with city, county and state sponsors about the results, Fan said.

Metro Transit has supported and discussed the project since it started in 2012, said John Levin, director of strategic
initiatives for the transportation authority.

“We are definitely very interested in the results of the study,” he said, adding that he feels those results will help Metro Transit design stops that lower perceived wait time in the future.

Metro Transit doesn’t yet know which amenities will stay and which will go, Levin said, but officials will pay attention to customer information, maps and other amenities highlighted in the study.

“If we understand what those factors are, that helps us understand where we should be paying attention in terms of designing those facilities,” he said.

The survey asked commuters questions like whether they used smartphones while waiting and how often they used transit, she said. Research assistants then collected the surveys and also photographed each participant holding the anonymous survey so they could match the replies to the video recording.

Levinson said he thought the study was designed well.

“Generally, people overestimate how much time they spend traveling on the trip, and this study corroborates that for transit,” he said.

For example, Fan said the study found that women tend to overestimate how long they wait at locations research assistants rated as unsafe.

Creative writing master’s student Dana D’Amico is from Pittsburgh and uses Twin Cities public transportation throughout the year. She said she thinks that heat lamps in bus shelters make the wait feel shorter.

“The public transportation here is a lot better than other cities I’ve been in, so I’m happy with it,” she said.

“In the winter, it doesn’t seem like you’re waiting that long because you plan your trips around bus times,” she said.

Levinson said the study’s results will prove useful for Minneapolis public transit in the future.

“This is the beginning of a way to come up with a systematic way to evaluate these amenities,” he said.