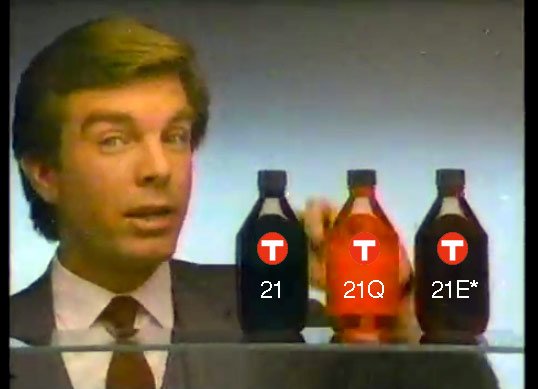 I had a frustrating experience riding the #21 a few weeks ago. I was hanging out with friends one weekday evening near Midtown, and I live near downtown Saint Paul. Using a smartphone transit app (but not this one), I saw that an eastbound #21 was coming in a few minutes and went out and boarded it. I soon realized that I was riding the #21D, which would deposit me neatly on the Saint Thomas campus miles from any other city buses. (This has happened to me before, and I ended up walking three miles in the winter to a friend’s house to beg for a ride. You learn bus lessons the hard way.)

“Oh well,” I thought. I checked my smartphone app again and saw that a #21A was about 25 minutes behind me, and that seemed like the perfect amount of time to spend at Merlin’s Rest. As it turned out, that bus was running on a different schedule than my smartphone, and I missed it. And then the next one was another #21D. Finally an hour later, I got on a #21A that would actually take me downtown, and an hour after that I was home. All told, it took over three hours to travel the ten miles from Saint Paul to Minneapolis.

Part of my crappy experience is that I’m an idiot who prefers a pint of Guinness to standing for half an hour in the cold. Another part of it is that the bus system (much like my phone) can be too smart for its own good. 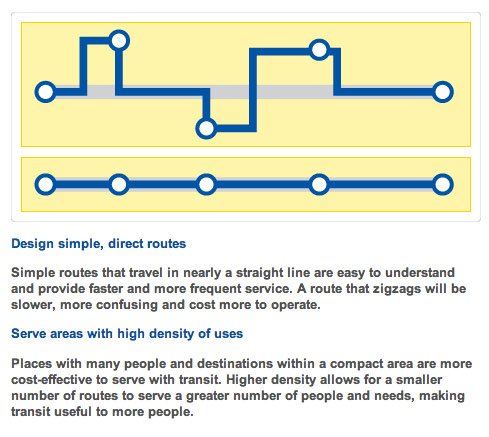 As far as I can tell, transit planning is all about making difficult choices. There’s never enough money, and you do your best to serve the most people with what you have. Every choice comes with a tradeoff. If you have more coverage, you have less frequency. If you run buses later at night, they run less often during the day. If you make buses cheaper, more people might ride, but you cover fewer costs. Ridership might increase if buses stop more often, but it might decrease because you’re traveling more slowly. There are always tradeoffs.

Because of the horrid road conditions, I’ve been riding the bus a lot lately. It’s left me with lots of time to think about transit planning. (A lot of time…) The tradeoff that’s been pissing me off is between route complexity and user experience. Many bus routes increase their coverage area or hours by offering different options. These are the familiar “letter buses.” You take a bus route and split it in two. It seems like a good idea because you increase your coverage without a large increase in costs. For example, half the time the #6 bus might goes all the way to a far-off destination, the other half the time it stops near where the bulk of the ridership drops off. There seem to be a million #6 buses. I’m from Saint Paul, so I don’t really understand, but I think that some go all the way to Edina (East Duluth Is Not Ascendant). Frankly, I have no idea where the other once go…

The problem is that increasing bus complexity comes at the expense of user experience. A lot depends on how well bus riders can understand the transit system and its routes. (This is doubly true for newer riders.) 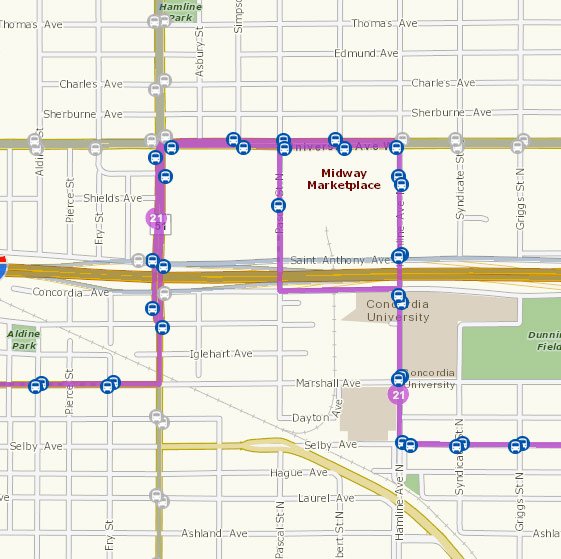 Of all the too-complicated buses that piss me off, the #21 is the worst. Going westbound, the #21 is straightforward. It goes down Selby, Marshall, and Lake streets to the Uptown transit center on Hennepin Avenue. That’s it. It’s (almost) exactly like its historic streetcar route.

For some reason, going eastbound is another story. There are lots of #21s to choose from. The #21A reverses the westbound #21 course, along Lake, Marshall, and Selby to downtown Saint Paul. The #21E (school days only) goes down Lake but stops at Hiawatha by the Target parking lot (I think). The #21D goes up Marshall and then turns *right* and ends at Summit Avenue and Finn Street on the Saint Thomas campus. The #21C goes along the regular route, but only takes you to University Avenue which is halfway to Saint Paul, and only runs late at night.

On top of that, sometime ago transit planners introduced a kink to the route of the #21 (both directions). Instead of continuing from Selby to Marshall Avenues through Saint Paul along the old streetcar line, the #21 turns North at Hamline and jogs along University Avenue for about a mile. It turns South at Snelling, and then continues down Marshall. I’m told that they introduced this change when a bridge on Selby Avenue was under construction, and people liked going to the big box stores so much that they kept it.

However it happened, it adds complexity and time to the #21 route. But the tradeoff is that it connects with the #16 and touches a major shopping destination. Unless you’re going to or from Target, the #21′s detour is pretty annoying.

There’s another other tradeoff, too. Because of its complexity, the #21 skips potential development sites that might occur along Selby Avenue (the old streetcar route). Right now, there’s a large new mixed-use apartment building under construction at the corner of Selby and Snelling that will include a new Whole Foods grocery store. The #21, despite being the “Selby-Lake” bus, is going to bypass it completely.

I get the tradeoff. Transit planners want their limited resources to serve the largest possible population. But take a look at the streetcar map. One of the reasons why people like streetcars is that they’re easy to understand and use. They go straight down the tracks to the end, and come back again. 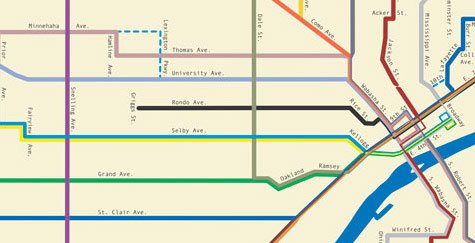 The streetcar system was pretty simple.

I used to live on the #3 line, another high-frequency bus route. The #3 has two key options, the #3A and the #3B, which go through slightly different parts of the Como and North End neighborhoods. But is also has the #3C, the #3E, and the #3B* (which is kind of like a magic catbus that goes through an industrial neighborhood only once or twice a day). Getting on the wrong #3 can be highly frustrating, particularly to a new bus rider.

(The #94 is similarly annoying. Most people use the #94 to quickly travel between downtowns, but a friend of mine calls the #94B the “94 bullshit” because it snakes around University Avenue, the state capitol, and the bank McDonald’s before finally getting on the freeway.)

The point is that while system complexity might seem like a good idea, it is a tradeoff. It comes at the expense of user experience. I am hopeful that as we add key spines through the city, some of these too-complex buses can be simplified. Saint Paul is adding a bunch of new North-South service that will serve the University Avenue LRT. Why not return the #21 to its straightforward East-West route, and let University Avenue-bound traffic connect using the new high frequency North-South lines? There’s even a brand new bus line planned for Lexington Parkway. Why not make the #94 a simple downtown shuttle? (Note: Metro Transit is doing this.) There are probably lots of other examples that escape me.

If you know the bus system really well, having multiple “letter bus” options isn’t that big a deal. You make the mistake once, and never again. But if you are a new rider, there’s a lot to be said for simplicity. You don’t want your first experience on the bus to be one that leaves you in the lurch, stranded on a snowbank, staring off into the deserted parking lot of the American Bank and counting the empty Cheetos bags blowing in the wind. 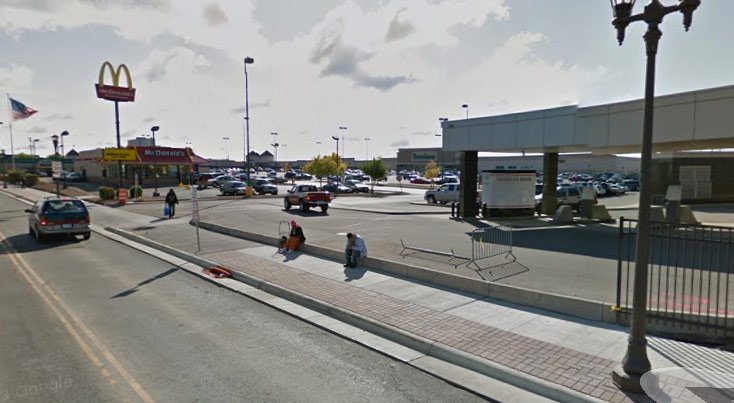 At top: I’m not a real transit planner, but I play one on the internet.