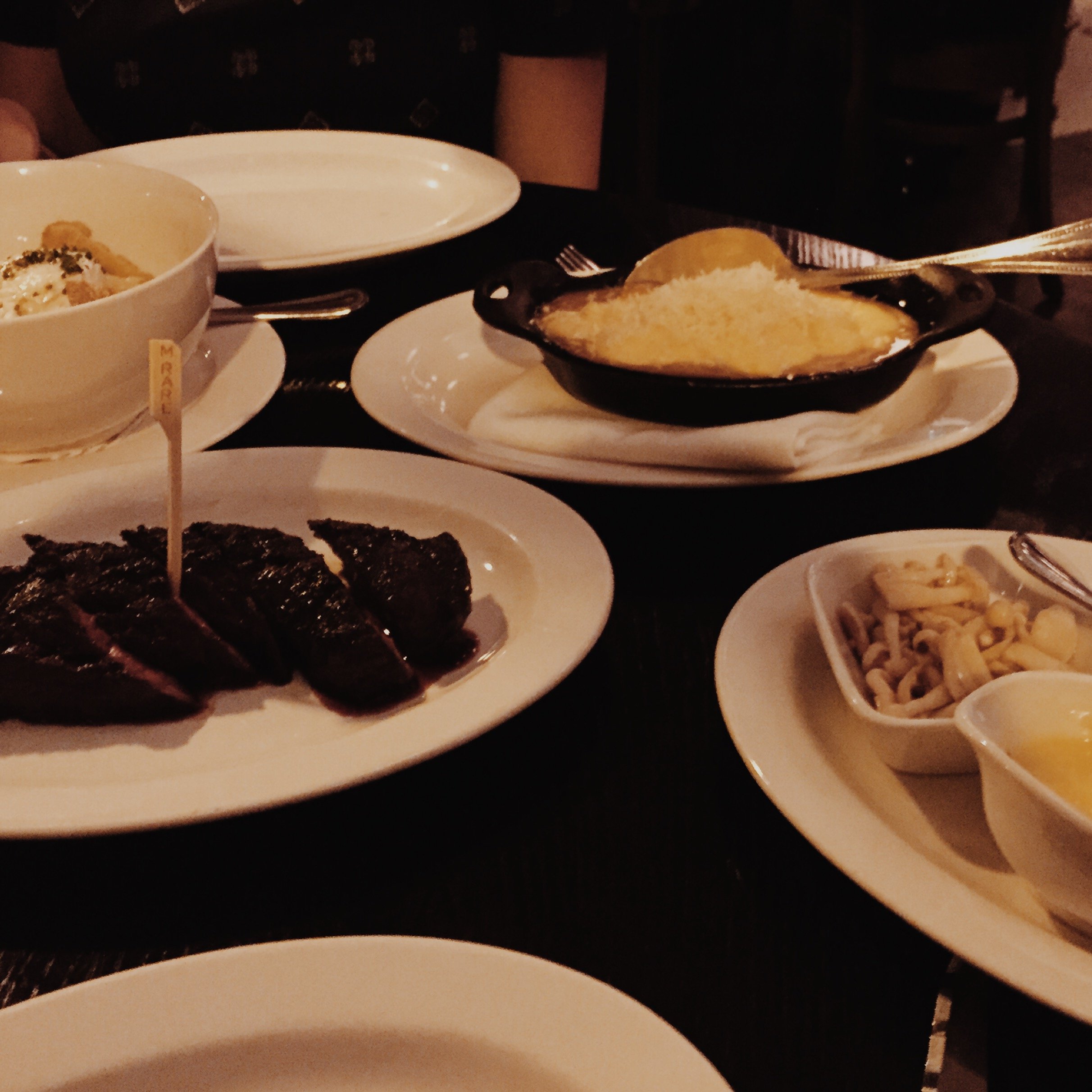 When I took this job as Arts and Culture Columnist, I was excited about all the new places, events, and restaurants I’d be exploring for the first time. An up and coming band playing at 7th Street Entry. A dingy but surprisingly tasty Cuban restaurant in Seward. A world-premiere play at the Guthrie. Blaine, Minnesota.

But as fate would have it, on a recent weeknight, I found myself in one of my favorite restaurants, Burch Steak and Pizza Bar (1933 Colfax Avenue South, MPLS.) This was, far and away, not the first time I’d patronized this establishment. I was an early adopter to Burch, not only because it is mere minutes from my Loring Park home, but also because the word “steakhouse” instills in me a Pavlovian urge to pay first and last month’s rent for a corner table. While I wouldn’t call myself a regular, I have a pretty good feel for the menu, as well as extremely high expectations.

Expectations, however, are par for the course at Burch. Opened in 2013, the steakhouse is the brainchild of Isaac Becker and Nancy St. Pierre, the team that brought us 112 Eatery and Bar La Grassa, which carry their own laundry lists of high accolades. At the time, Uptowners were still mourning the aesthetic loss of Burch Pharmacy, one of only a handful of “Old Minneapolis” vestiges at the foothills of downtown. In passing, one could almost hear the collective hipster voice hover over the corner of Franklin and Hennepin: “This place better be good.”

But for Burch, as it turned out, “good” ain’t got nothing to do with it. It is exquisite, if not perfect, each and every time.

Whether it be the steak- assorted cuts of the Grass-Fed, Prime, or Domestic Wagyu varieties- gourmet pizza, or the delightful and ever-changing litany of appetizers, Burch transcends both its “steakhouse” and “pizza bar” subtitles. A subpar dish is hard to find, and the menu extends in all directions: Italian to Eastern European, experimental to classic, dainty to hearty. At year’s end, Burch was named Best Restaurant of 2013 by Minneapolis/ St. Paul Magazine.

What is most striking about the place is the delicate balance of fancy and comfort. If indeed it holds the high honor of reigning Best Restaurant, it doesn’t carry the swagger of a rookie champion. Make no mistake, it is a fancy restaurant. But unlike its perennial all-star sisteraunt* Bar La Grassa, Burch exudes a feeling of comfort and, I’d say, confidence. The full-valet service nothwithstanding, there’s not much “high-class” about the entryway: a dimly lit and refreshingly uncrowded foyer. With such hype, one would expect a loud, bright, and intimidating landing (I’m talking to you, Bar La Grassa.) Not here. The lower level pizza bar truly feels like a neighborhood hangout, with the kitchen and oven fires classically visible. The upper level brings to mind the word “savvy”; Burch knows what it’s doing, doesn’t ask questions, and gets it right.

What does it get right? Well, I haven’t been able to sample everything (#thanksobama), but here are some highlights from the most recent visit: escargot with chanterelle mushrooms in sorrel butter, roasted bone marrow with gremolata (OMG), and the Grass-Fed hanger steak (broiled rare to melt-in-your-mouth perfection.) Difficult-to-decide-on sides ended up being pommes puree, house sauerkraut with poached egg, and sautéed kale with dried peppers and ricotta salata. A must have, on any night, is the soup du jour, which on this evening was a seasonal pumpkin bisque with (like a boss) juicy bits of scallops. The food was so good, I almost forgot about the tuck-you-in-at-night whiskey that washed it all down.

At the end of a meal at Burch, I find that the individual dishes merge into a single dining memory- a half remembered dream of deliciousness. It earns its title of Best Restaurant, and a local connoisseur would be remiss not to be, dare I say, a regular.

And so it was that, on my first assignment, supposedly bound for new adventures and uncharted territories, I found myself in an old standby. But the beauty of Burch is that, no matter how often I go, I seem to experience it all for the first time.

*I just invented this word. For those unfamiliar with portmanteau, it’s sister + restaurant. You’re welcome, literature.