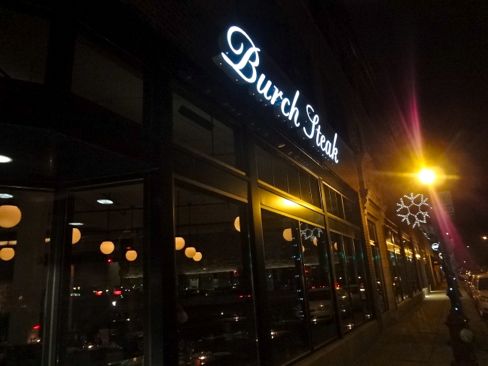 The idea is so crazy that it just might work. Actually, to judge by the weekend crowds, the idea is working just fine.

Who would have guessed? The whole idea of a steakhouse is so, well, un-South-Minneapolis, to coin a term. When I think steakhouse, I think Manny’s and Ruth’s Chris and Capitol Grille—those downtown palaces of expense account dining, where the menu boasts 40-ounce steaks with names like “bludgeon of beef” and baked potatoes the size of your head. Conspicuous consumption on steroids. Rush Limbaugh fans who drive in from the burbs in their Hummers. 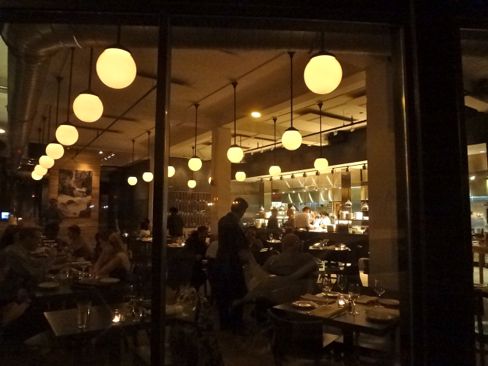 So, here’s the brilliant part of the new Burch Steakhouse: when I looked around the crowded dining room, I saw a roomful of people who—if you will allow me a few moments of completely unfounded speculation and reckless stereotyping—looked like they would never set foot in a traditional steakhouse. Hipsters. Cultural creatives. Backyard composters. Half the clientele and most of the waiters were wearing jeans. There was even one dude in a wool cap and hoodie. A crowd you would more likely expect to find in Burch’s basement-level pizza bar.

So how did Isaac Becker pull this off?

Branding is part of the story. With the 112 Eatery and Bar La Grassa to his credit, Becker’s own brand promises hipness. And the steaks on the Burch menu are branded as well. The 100% grass-fed steaks (leaner, heart-healthier, less damaging to the environment) are sourced from Grass Run Farms, while the grain-finished natural and prime steaks are from Niman Ranch, a name that most foodies will recognize. (“Compassionate family farmers raising animals with respect for the land.”) 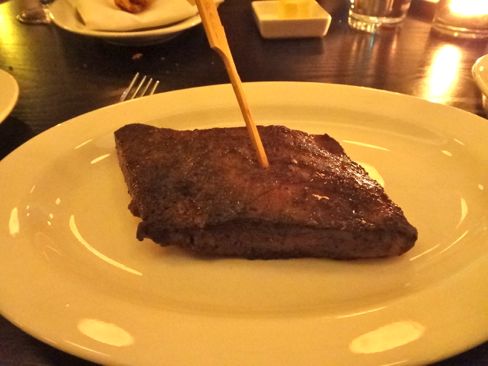 Pricing and portion size are also a factor. While the downtown steak houses specialize in top cuts like porterhouse and T-bone and ribeye, typically in portions of 16 ounces or more, Burch offers less popular cuts, like flat-iron and hangar steaks, in portions as small as six ounces. Prices start at $11 for a hangar steak ($13 for prime), or $12/$13 for a flatiron steak. Much more affordable than, for example, Manny’s, where the cheapest cut is a $39.95 baseball steak (top sirloin), and most cuts are $54.95 or more.

It’s also a completely different menu than the traditional steakhouses. No wedge of iceberg lettuce. No baked potato. Instead, offerings that range from a marlin crudo, dry peppers, pine nuts, burnt onions and lamb tartare to chocolate braised rabbit bridie with acorn squash, pine nuts, and six different dumplings from around the world. 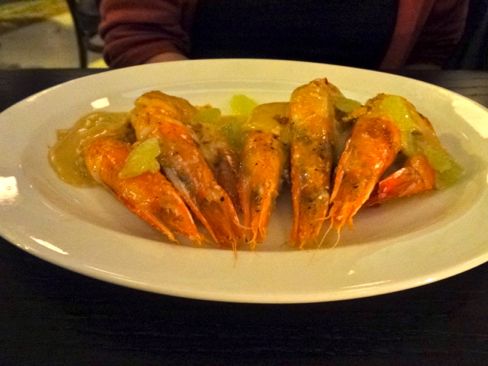 I have visited the ground-level steakhouse twice now, and the basement pizza parlor once, with mixed results. On my first visit to the steakhouse, there were lots of things that seemed a little off. The gorgonzola sauce on the schupfnudeln (gnocchi’s German cousins, $6) was over-salted, the bibb lettuce salad overdressed, and the grilled prawns, though unusually flavorful, were flecked with big bits of overpoweringly sour lime. I only tried one of the steaks—the six-ounce flat-iron ($12), accompanied by a Bernaise, a house-made steak sauce, and a very sour pickled mushroom relish. The steak, ordered medium-rare, was completely lean, and wasn’t at all juicy the way a more marbled steak would be, but it was still quite enjoyable, with a distinctive beefy flavor. 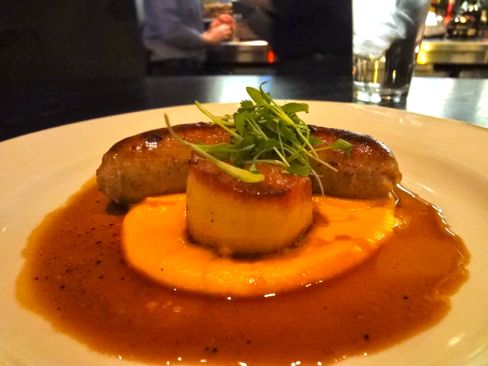 On a return visit, I dined solo at the bar, and had a couple of terrific dishes. The kinkhali dumpling ($6), a Georgian specialty, looked a little like a beggar’s purse, and poured out a savory treasure of ground veal and pork when I cut into it. The scallop and foie boudin blanc ($18) consisted of one large scallop, perfectly sauteed, accompanied by a foie boudin blanc sausage, on a bed of carrot puree. Foie means liver, and I am not sure whether in this instance it is supposed to imply duck liver, or even duck foie gras, or plain old pork liver; in any case I suspect more people are likely to order it if they call it foie. It was delicate and rich and delicious, and perfectly paired with the succulence of the scallop. The chocolate hazelnut cake that followed was the perfect way to end the meal.

As for the pizza bar, the white walls and neon basement setting is a bit stark, and the decibel level was pretty high, but the fugazza pizza, topped with bufala mozzarella, shaved onions, oregano, and arugula, $10) was thoroughly enjoyable. I’m a big fan of these woodburning oven pizzerias, whether it’s Elements in northeast Minneapolis, Pizza Lolla, Pizza Nea, or Punch—great for an inexpensive night out when you don’t feel like cooking. The pizzas mostly seem pretty similar from place to place, but they’re usually tasty, and it’s nice to have another one not to far from home. 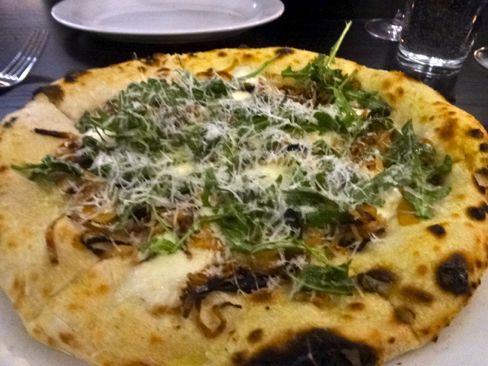 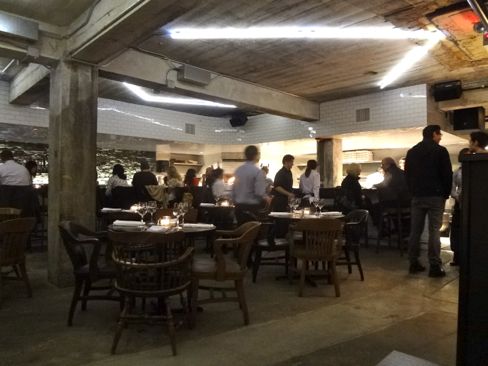 “Have a magical night and a titillating tomorrow”: Also in the Daily Planet, meet Beck DeRobertis, Uptown’s favorite liquor store cashier and a fixture at Lowry Hill Liquors near Burch Steak and Pizza Bar.