Lots of attention has been given to yesterday’s final game at the Metrodome, with the consensus that the highlights of its three decade life span were the Twins’ World Series victories in ’87 and ’91, and the Vikings loss in the NFL’s National League championship game in ’99.

All the recent references I’ve seen to the Metrodome’s cost (55 million dollars) have had to do with what a bargain that was, considering the history that happened there and the new stadium’s price tag of around one billion dollars.

I’m old enough to tell you that the many, many public discussions leading up to the building of the Metrodome did not often include the word “bargain”. Many people found it amazing that any community resources at all would be used to help pay for a sports palace. And “palace” is the right word – though the building is portrayed as being rather utilitarian in the modern press, at the time it was considered to be a remarkable advance. But there was strong opposition. And if anyone leading the effort to build the Metrodome had said that the thing would be used for only thirty years and then abandoned, it would have scotched the deal, I’m certain. 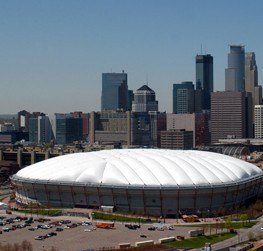 What I haven’t seen mentioned lately is how much of the Metrodome struggle was about strengthening downtown Minneapolis – returning excitement and activity to the city’s center at a time when everything seemed to be moving to the suburbs. Though literally none of the promised surrounding development materialized, to the extent the building kept downtown as a regional destination point, it was a success. But the sports arena longevity prize will have to go to some other structure. Williams Arena, perhaps?

What torn down building would you like to have back?