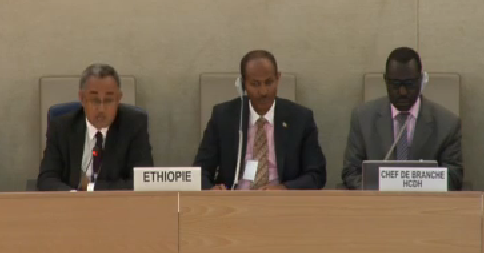 This fall was a busy time for advocacy at the United Nations on human rights in Ethiopia. It was also a great time to see The Advocates for Human Rights’ new toolkit, Paving Pathways for Justice and Accountability: Human Rights Tools for Diaspora Communities, in action.

In a one-hour session on September 19, the UN Human Rights Council adopted the outcome of its second Universal Periodic Review of Ethiopia. You can watch the video of the session here.

The Advocates for Human Rights is based in Minnesota, not Geneva, so we don’t generally get a chance to address the Human Rights Council during the UPR process. But I often watch the live webcasts, and this time I got up early to livetweet. 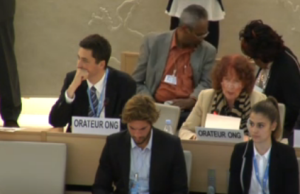 While relying on international funding to supplement 50-60 percent of its national budget, the government has simultaneously criminalized most foreign funding for human rights groups in the country. These restrictions have precipitated the near complete cessation of independent human rights monitoring in the country. It is therefore deeply alarming that Ethiopia has explicitly refused to implement recommendations put forward by nearly 15 governments during its UPR examination to create an enabling environment for civil society.

The Ethiopian Ambassador to the UN in Geneva, Minelik Alemu Getahun (top), lashed out at the NGOs that commented, particularly Civicus:

I regret the language used by some of the NGO representatives and particularly the call for action some of them made against Ethiopia in the Council for alleged isolated acts. Some of the language used in the allegations, particularly the remarks by CIVICUS on our budget is outrageous and incorrect. I can assure the Council that Ethiopia relies on its peoples and their resources, which is not unusual supplemented by international support.

Now it’s up to people on the ground in Ethiopia, as well as people outside of Ethiopia like the Oromo diaspora, to lobby the Ethiopian Government to implement the recommendations it accepted and to monitor whether the government is keeping its word.

The next UPR cycle for Ethiopia will begin in about 4 years, when NGOs will have a chance to submit new stakeholder reports demonstrating whether Ethiopia has implemented the recommendations it accepted, pointing out any developments on the ground since the last review, and advocating for new recommendations that will improve human rights in Ethiopia. Learn more about how you can get involved in the UPR process of Ethiopia (or any other country) on pages 200-210 of Paving Pathways.

Opportunities Ahead for Voices to be Heard

On Wednesday, November 19, Amane Badhasso and I will have a talk with the Amnesty International chapter of the University of Minnesota Law School. The students are eager to learn more about human rights in Ethiopia, and they want to participate in a collective activity to show their support. There’s been a lot of attention lately to a report Amnesty just released on human rights violations against the Oromo people.

Organizations like The Advocates for Human Rights and Amnesty will be ineffective if they work on their own. The Oromo diaspora, as well as other diaspora communities from Ethiopia, have a critical role to play in leading the way to promoting human rights, justice, and accountability in Ethiopia. The Advocates for Human Rights hopes that Paving Pathways will lay the groundwork for many more fruitful collaborations.

Are you a member of a diaspora community? Do you know people who are living in the diaspora? What steps can the diasporans you know take to improve human rights and accountability in their countries of origin or ancestry? How could Paving Pathways and The Advocates for Human Rights assist them?

Amy Bergquist is a staff attorney for the International Justice Program of The Advocates for Human Rights.

More posts about the crisis in Ethiopia: