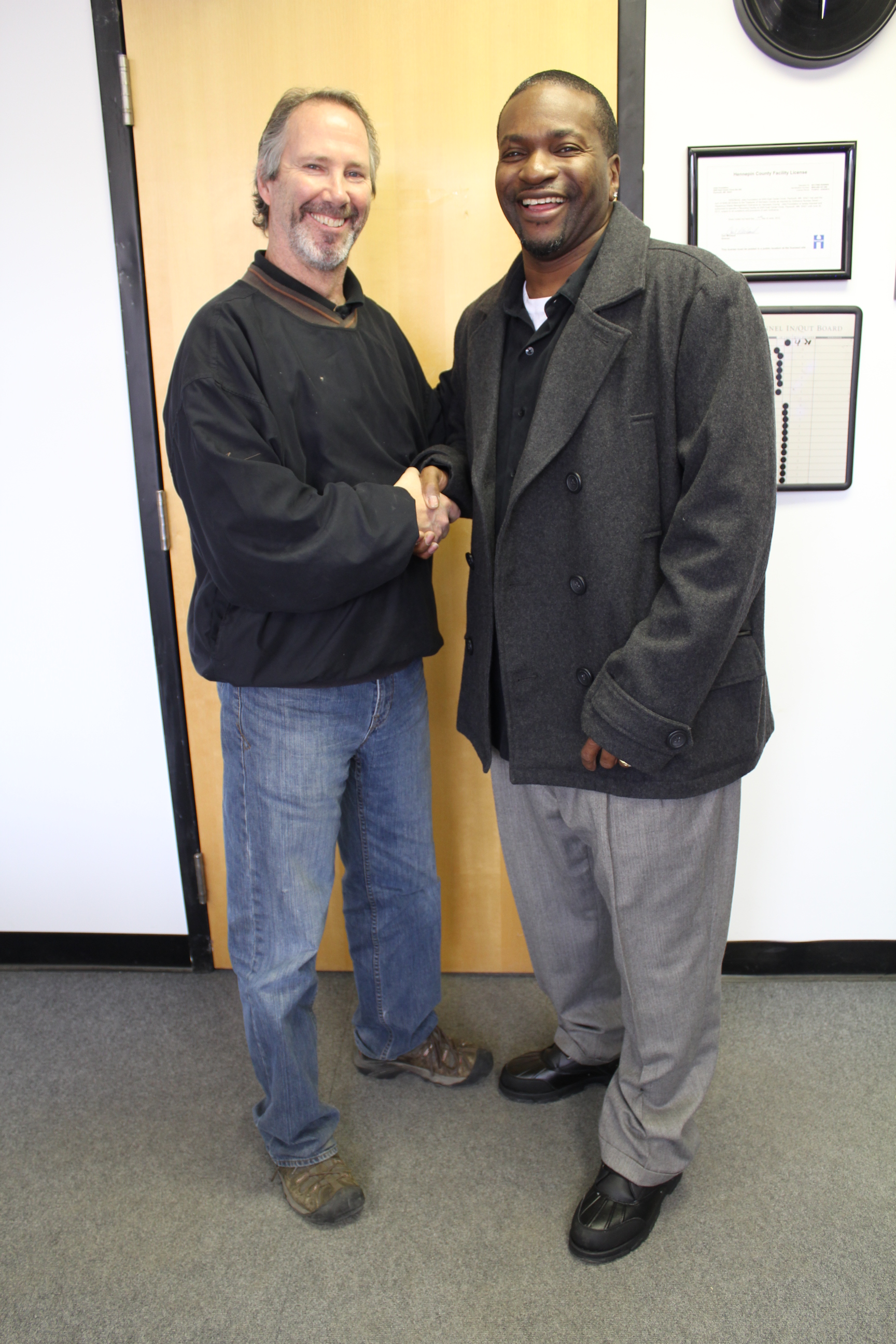 “Fellowship builds us up and binds us together.”

The message, displayed prominently on a blackboard at the Jobs Foundation and Tech Dump, resonates with the participants and founders of the non-profit organization. That’s the way the program was set up to function, according to Tom McCullough, one of the founders of the Jobs Foundation. McCullough and business partner George Lee used their business experience to found a non-profit that assists workers with troubled backgrounds by helping them learn and hone key job skills, such as communication and teamwork.

“All along, we felt we could leverage more value by teaching some of the skill sets we were applying at our for profit business, Probus OneTouch,” McCullough explained during a tour of the Plymouth facility. “Jobs Foundation started April 2010, and much of the financial growth and success has occurred with its Tech Dump computer and electronics recycling division,” which McCullough also manages.

Currently, the Jobs Foundation employs nine “planned individuals,” meaning participants directly involved in the skills and job rehabilitation experience, and four “non-planned” individuals, those not necessarily from troubled backgrounds, or seeking later employment at a traditional station. Once enrolled into the program, participants  undergo “measurements of success… including staying clean, mastering new job skills, buying their own transportation, going back to school… each of these milestones are being achieved within the employee population at Jobs,” explained McCullough. Throughout the workforce, “ten people are on full time, with three part-time,” participant Carl Johnson said. “We have a lot of individuals looking for work.”

“What drives me… is getting workers to do well,” said Tech Dump worker David Ritchie. “I’ll give guys a hand up, but not a hand out. That’s what the Jobs Foundation is all about. If you can help one, you can eventually get help for many.” Ritchie, who was born in Minnesota, arrived at the Jobs Foundation nearly two years ago after a tumultuous span in Florida, which saw him in and out of the legal system on various offenses. After initially transporting furniture, Ritchie found a “wonderful” position, both working in and overseeing daily operations in the Tech Dump department, while also scouting outside companies who need electronics recycled.

“Cargill, Pearson’s, the City of St. Louis Park, and Brooklyn Park,” among other entities, will contract with the Tech Dump to pick up, transport, and process electronics, Ritchie explained.

During 2012, “978,000 pounds combined weight of electronics were processed for all Tech Dump events including onsite pickups and/or drop offs at our facility,” McCullough added.

“In one event, we did 89,000 pounds… [overall] we have processed over a million pounds from the time I joined,” said Ritchie. In his primary position as a lead in the Tech Dump, Ritchie oversees a handful of participants who break down all types of electronics, from radios to computers, printers to sounds systems. During the processing operation at the Tech Dump, electronics are either branded as “fit for recycling” or “fit for reuse.” The participants themselves get practical experience handling the items, by disassembling, storing, or transporting the parts to outside organizations if they are fit for re-sell. This cycle teaches continuity, technical experience of a hands-on nature, and verbal camaraderie common in a traditional work setting.

“When individuals come to Jobs Foundation, it takes 2-3 years of ‘incubation’ for them to stabilize and gain both confidence and skill sets that permit ‘graduation’ from the program,” McCullough said. The Jobs Foundation has its first graduate in Josh Wilson, who went from being homeless in Minneapolis, to joining the Foundation as a truck driver, and now operating as an investment counselor at Crash Cash, a business that assists individuals who have been in automobile accidents.

“My experience with Jobs Foundation has been one that I will never forget,” Wilson said in an email to the Daily Planet. “It has given me the opportunity to change my life and be the person I am today. Leaving Jobs Foundation was very tough… [It] is the only place that gave me, a felon, a chance to be somebody! In graduating from the Jobs Foundation, my wish is for society to see that people with felonies deserve a chance just like everyone [else].”

McCullough stressed that “big things” are ahead for the non-profit and its participants. “We have several goals for the near future: to procure safe housing for our family of workers, transportation, possibly via a company vehicle, and a corporate partner who shares our vision, meaning aligning our future graduates with a living wage and stable employment. A key thing is that a lot of our workers are economically challenged… [But] they have the character to change and further themselves.” McCullough added that the Foundation plans to “double our 2013 budget to accommodate the sales and reprocessing growth we expect… we would hope to add an additional seven in planned participants by the end of 2013.”

To learn more about the individual participants, the Tech Dump, and the Jobs Foundation itself, please visit the company website at www.jobsfoundation.org.