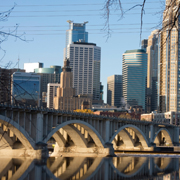 More ubiquitous than McDonald’s, structurally deficient bridges are found across Minnesota and the rest of the United States.While not every one is in imminent danger of falling down, new research has found that Americans take more than 210 million trips over these suspect spans every weekday.

That’s more than three times McDonald’s worldwide daily customer count of 64 million. It’s no mystery why. The nearly 70,000 failing arches across the country outnumber the Golden Arches five to one.

Despite the iconic tragedy of the Interstate Hwy. 35W bridge collapse in Minneapolis four years ago, Minnesota fares relatively well in three important new studies focusing on the nation’s bad bridges. According to the conservative-leaning Taxpayers for Common Sense, all but one of Minnesota’s eight congressional districts has a lower percentage of structurally deficient spans than the national average.

Progressive-leaning Transportation for America reports that Minnesota and the Twin Cities metropolitan area both rank around the top one-third of the nation in overall bridge condition.

In the Twin Cities, however, 21 drivers still cross a deficient bridge every second. In the Los Angeles metro, it’s 396 per second.

Our scores might improve over the coming years as Minnesota’s $2.5 billion bridge repair and replacement program targets at least 130 of the state’s busiest fracture critical and structurally deficient highway spans. The program was enacted over former Gov. Tim Pawlenty’s veto following the 35W collapse and a five-year period when Minnesota tied for last in the nation with arid Arizona in percentage of allotted federal bridge funds actually spent on bridges. During that time, Pawlenty focused much of available bridge and highway money on expanding freeway capacity in the Twin Cities and Rochester.

Arizona and most of the Sunbelt generally boast the nation’s soundest bridges, according to both T4CS and T4America. While the reports don’t explain this, it’s likely a function of fewer and newer bridges over drier, more recently built-up topography.

Age is a key factor in the strength of bridges, which typically are designed to last 50 years. Also, we are nearing 50 years since engineers quit designing fracture critical bridges, the kind, like the doomed 35W span, that can collapse entirely if just one supporting element fails.

The average age of all U.S. bridges is 42 years, which means the next decade will be critical for trimming the American infrastructure maintenance deficit, which is as real as the federal budget gap that’s gotten so much attention lately. What’s worse, the bills due for crumbling roads, bridges, sewers and other public infrastructure grow much faster than the rate of interest on government debt as deterioration progresses, multiplying the cost of corrective work.

Despite this well-known fact, few states besides Minnesota have gotten serious about the problem. Pennsylvania, where the average bridge is 53 years old, is a rare exception as well as a cautionary example. It quadrupled its bridge spending in 2008, funding work on 1,145 bad crossings by late 2010, but a quarter of its spans remain deficient, worst in the nation. (By comparison, Minnesota is at 8.8 percent, the Twin Cities at 5.9 percent. Among Minnesota’s congressional districts, only the First along the Iowa border, at 13.5 percent, tops the national average of 11.5 percent.)

“By neglecting maintenance, states can find themselves in enormous holes that are very hard to dig out of, even with a long-term commitment of resources,” says Taxpayers for Common Sense. “Although many states are not in as precarious a position as Pennsylvania, this is a warning that neglecting maintenance needs in favor of building new infrastructure can have enormous future consequences.”

Slowly, even some conservatives are getting the message. Last week the conservative appropriations chairman of the Pennsylvania Senate proposed phasing in higher fuel, registration and license taxes to speed catching up on road and bridge repairs and maintenance.

“We can’t continue to ignore these pressing challenges, which are directly related to public safety and economic development,” said state Sen. Jake Corman of rural central Pennsylvania. “Now is the time to act — the evidence is overwhelming and the need is there. The only thing holding us back is political fear.”

Meanwhile, a committee appointed by Iowa’s governor has called for a higher gasoline tax. Iowa has the nation’s third-highest percentage of structurally deficient bridges. And in Congress, House conservatives have backed away from cuts in federal highway and transit spending they proposed earlier, recasting the legislation as a major jobs bill.

What may be spurring this kind of conservative apostacy is a growing realization that a new focus on fixing failing infrastructure is critical not only for public safety, but also for a path out of our economic doldrums.

“Long-term investment in public infrastructure is the best way to simultaneously create jobs, crowd in private investment, make the economy more productive and generate a multiplier of growth in other sectors of the economy,” the New America Foundation, a Washington, D.C., think tank, said in a report this month.

Indeed, both Moody’s and the Congressional Budget Office have estimated that $1 of infrastructure spending generates a $1.60 increase in economic output. Moody’s says this multiplier is even greater than that for payroll tax cuts, which make up a bigger share of President Obama’s jobs plan. Plus, there’s strong evidence that basic upkeep outperforms building new assets in bang for the buck.

“Members of Congress who argue that the federal government cannot afford the infrastructure investments in the American Jobs Act are wrong — the government’s borrowing costs are at a historic low,” said Laura D’Andrea Tyson, former head of President Clinton’s Council of Economic Advisers, in a recent New York Times article. “Borrowing now to fund efficient infrastructure projects will reap returns that exceed these costs and will reduce future deficits through job creation and higher growth.”

D’Andrea Tyson calls this approach “the infrastructure twofer,” promoting jobs now and growth in the future. Throw in a safer trip across bridges that now are dangerously deteriorating, and we’d have a public policy direction that makes serious sense.