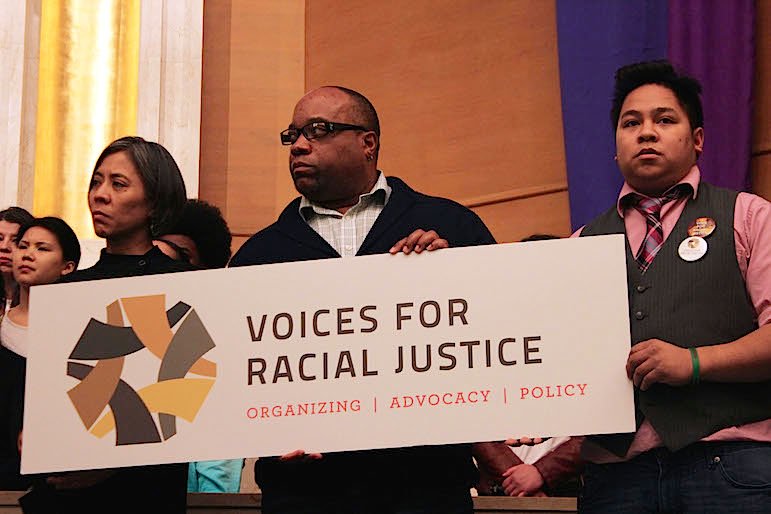 Organizers stand together at a rally hosted by Voices for Racial Justice on March 10 to put forward the groups 2016 Race Equity Agenda. Photo by Nicolette Rykhus.

More often, we’re hearing and seeing stories of injustices in the prison system. People of color are entering the prison system in Minnesota at disproportionately high rates, with limited support upon re-entry to society, as well as little support for their families while a sentence is served. While incarcerated, individuals in the prison system work for the profit of the state and corporations, often at less than $1 per hour.

And then there are stories you don’t hear about, like when an inmate can go to solitary confinement just for having a conference call, when an an individual has to violate parole and return to prison just to get job training, or when an inmate can’t hug their child during visitation.

A new and growing movement in Minnesota not only wants to tell that whole story, but work with incarcerated individuals within the prison system to affect real and lasting change for inmates and their families.

In this podcast, Filiberto Nolasco Gomez sat down with two key organizers with Voices for Racial Justice – Associate Director and Director of Training Salvador Miranda and BRIDGE Organizer Alisha Volante – to talk about Voices’ innovative partnership with BRIDGE, a movement led by incarcerated individuals organizing within Minnesota’s prison system to share the stories of incarceration, to develop solutions addressing mass incarceration and re-entry, and to build a stronger bridge from prison to the community.

“This has literally never happened before, at least in the state of Minnesota,” Volante said.