In normal times, the corner of University and Raymond is one of the main intersections in the Bugle readership area. But for anyone trying to get to the Edge Coffee House, Sharrett’s Liquors, Twin Cities Reptiles or any of the other businesses on the north side of the 2300 block of University Avenue in recent days, these are far from normal times. 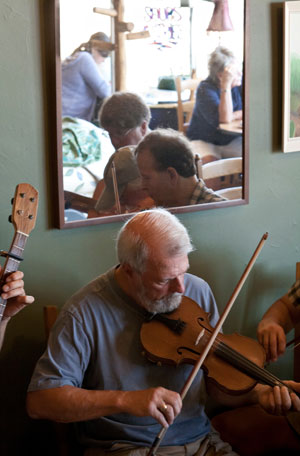 A couple of weeks ago, a giant excavation hole was opened on the north side of the intersection, where the street and sidewalk used to be. The ordinary complement of cars and pedestrians have been replaced by mounds of loose earth, earthmoving equipment like backhoes and bobcats, and a platoon of construction workers, all courtesy of the Central Corridor Light Rail Construction project.

At left, the torn-up street outside of the Edge Coffee House didn’t stop Steve Boller and a dozen other musicians from gathering on a recent Saturday morning at the Edge Coffee House for an old-time music jam. The twice-weekly jam is open to the public, and the musicians insist there is plenty of parking to be had on surrounding streets. (Photo by Lori Hamilton)

LRT Communications Manager Laura Baenen promised this phase of heavy construction at the intersection will be completed by the end of the year. Meanwhile, Walsh Construction worker Tom Besaw Jr. had been given the job of telling coffee-seeking pedestrians that “You can’t get there from here.”

Clad in a neon-green traffic vest, Besaw said that, in the course of an hour, he had directed 30 or 40 pedestrians back up north on Raymond, through the alley behind Keyes Restaurant and back around to University Avenue from the west. “Most people are nice about it,” said Besaw over the din of heavy equipment, “but they’ve got to be really careful.”

Reilly Tillman, who works at IFP Media Arts, an independent educational film organization on the south side of University near Jimmy John’s, might agree. He was about to cross University on his way to the Edge when a woman made a right turn in front of him. “I could have reached out and smacked her car,” he reports. “In fact, I did.  She was quite oblivious, but I had right-of-way.” Perhaps not coincidentally, considering the daily perils of his pedestrian route, Tillman was wearing an orange shirt that rivaled the Besaw’s vest for sheer visibility.

Traffic hazards aside, Tillman is surprisingly upbeat in his assessment of the impact that LRT construction has had on his own company.  “It’s not been as catastrophic as I expected,” he says.  “I don’t think we’re losing customers. I was expecting the windows to be rattling constantly, but things haven’t been that disruptive.”

He notes that his business is lucky to have off-street parking and access from nearby Pelham Parkway and Franklin Avenue. He sounds a cautionary note that businesses like the Edge Coffee House are probably not so well-situated: “We have to wonder if there will ever be any more street parking on University. Problems may never end for small businesses with no parking.”

Tillman is such a fan of the Edge that he has posted an enthusiastic endorsement of the coffee shop on Facebook. Nothing will prevent him from making the trek for his daily cup of Joe, but others may not share his determination. The owner of the Edge, who goes by the name of Ya-Ya, estimates that her business is down by 60 percent, forcing her to cut back hours and apply for an operating loan. [See “Voices.”]

On a warm afternoon, the screen door was the only barrier between the coffee house and the noise of construction; but that hardly mattered since there was only one other customer in the shop aside from Tillman—and he was ordering his coffee to go. Bob Malles of Desnoyer Park explained that he had ridden over on his bike.

“I’m a coffee shop patron of many places,” he said.  “I like to get out.” He admitted that he was surprised to find the sidewalk missing when he crossed University Avenue, but he had no problem following Besaw’s directions to approach via the alley.

The young barista at The Edge, who gave his name as Jordan, may have been the sunniest person in sight. “I don’t mind the noise,” he said, “but then I’m leaving next week for San Francisco to study economics at Berkeley.”

Down the block at Sharrett’s liquor store, the mood was scarcely lighter. Manager Teddy Kline noted, “Business is slow, but we’re not shortening hours yet. One good thing [about the construction]: It’s solidifying our customer base. The ones who come are making more of an effort.”

One such loyal Sharrett’s customer is Gene Crawshaw from north St. Anthony Park who had stopped in on his way to pick up his daughter from her Irish dance class at Celtic Junction on Prior Avenue.

“I read about all this on the local list-serv,” he said, gesturing in the general direction of the giant hole that had temporarily swallowed the store’s front sidewalk. “They’re urging people to support local businesses affected by the construction. We went to Café Biaggio [at 2356 University Ave. W.] a few nights ago.”

Stepping up to the check-out counter at Sharrett’s, 20-something Joe Kuntz professed no such loyalty. He explained simply, “I always come here. I live at the Carleton Artists’ Lofts, and Sharrett’s is the closest place.”

Out on the sidewalk heading north on Raymond, Pamela Richmond of north Minneapolis, took the philosophic view. A slender woman in a long denim skirt and a close-cropped silvery Afro, she was looking for a bite to eat on her break from class at the Minnesota School of Bartending at 2426 University. “Sure, the construction is a little inconvenient, but it’s Minnesota and late summer,” she shrugged.  “That’s what we do here.”

Just down the block from her was Ron Dufault, former member of the St. Anthony Park Community Council. “I walked down from north Saint Anthony Park,” he explained, “Normally I would have taken the bus. I’ll be glad when the construction is done, but it hasn’t stopped me. I’ve been in favor of the LRT project since the beginning.”

Dufault then revealed something fairly unusual about himself.  Of all the people out on this warm and sunny afternoon, only Dufault and liquor store clerk Tim Reinholdy declare that when the $957 million Light Rail Transportation project is fully completed in 2014, they plan to be regular riders. “This is the price you pay for progress,” Dufault says. “Now I’ve got to find where my bus stop is.”

Readers can follow the daily progress of this segment of the LRT project at http://www.metrocouncil.org/transportation/corridor/newsAlerts/CUUNW.pdf.

Judy Woodward is a reference librarian at Roseville Library and a frequent contributor to the Park Bugle.