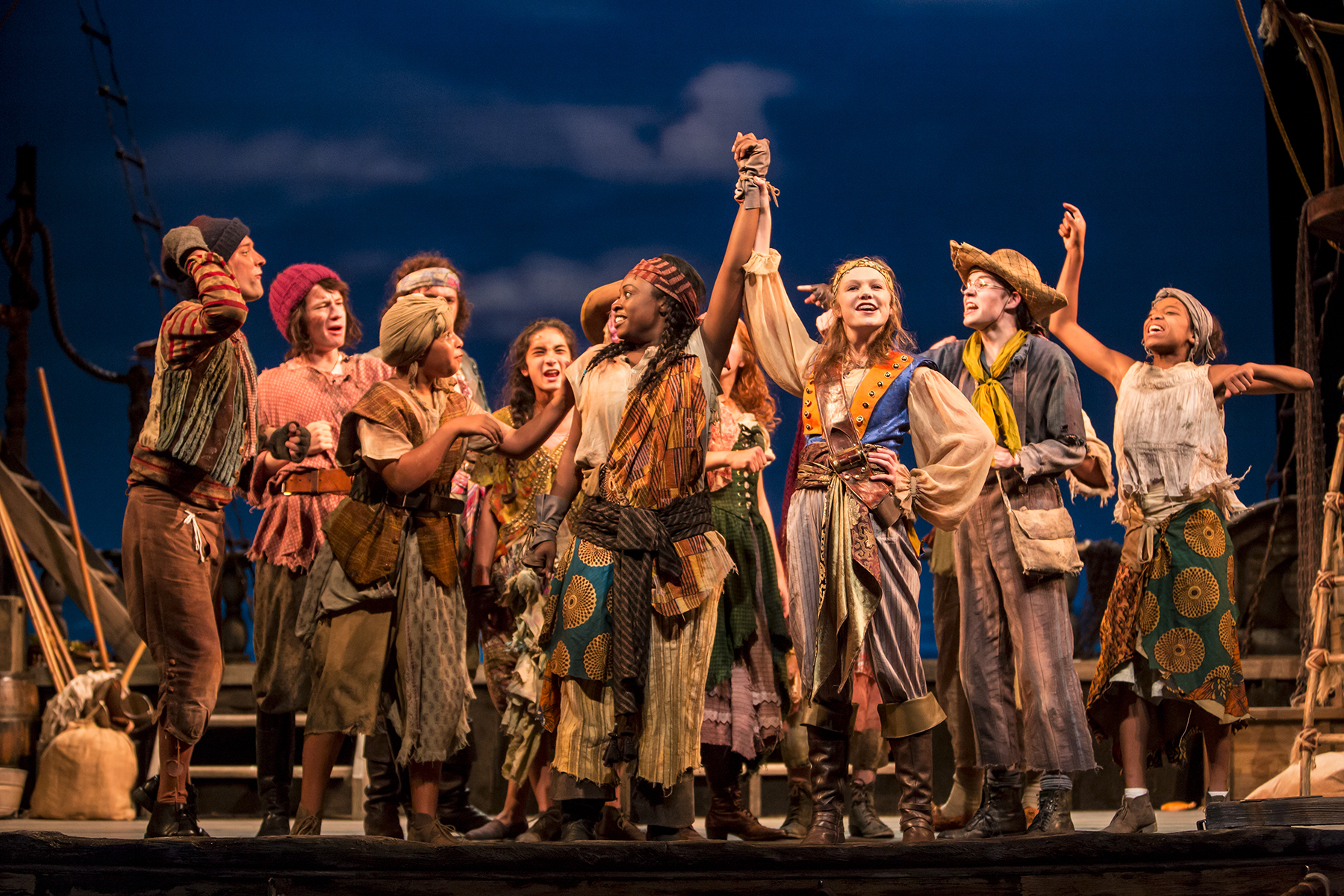 The world premiere of Buccaneers, a new pirate musical, opened this last weekend at the Children’s Theatre Company. Playwright Liz Duffy Adams partnered with composer Ellen Maddow to create a play that is very entertaining and surprisingly educational but at the same time somewhat alarming with its numerous bloodthirsty references.

The musical is premised on the adventures of a young heroine, Enid Arabella. Arabella is living on an island with her parents who have recently had serious financial reversals. Her parents are contemplating letting a distant relative take Enid Arabella back to England to be a charity student at a boarding school—something that is portrayed as an extremely bleak existence. Overhearing these plans, the young heroine plans to run away when she spies pirates burying treasure. Thinking that the treasure could help her family out of poverty, she seeks to dig it up but is captured by the pirate captain Johnny Johne. After being repeatedly threatened with death, including a scene where Johne holds a sword to her throat, she is pressed into becoming part of the pirate crew which is made up exclusively of children captured from around the world. Eventually, the plucky heroine wins the respect of her fellow crew members and takes over the ship.

The bloodthirsty references are mild compared to most popular media but are inappropriate for a show geared to an audience of children. I found myself cringing when the sword was held at Enid Arabella’s throat, and two young children sitting by me starting crying resulting in their parents taking them out of the theater. But once the musical stopped dwelling on how many people had been killed or would be killed by Johnny Johne, the show took a very pleasant turn as the oppressed children debated the corruption of power and how to avoid another oppressive leader through democracy and elections. Founding Father James Madison would have been proud of this civics lesson.

Megan Fischer plays Enid Arabella and is quite captivating on stage both as actor and singer. She takes the heroine from a somewhat whinny little girl to a selfless, competent leader who puts the welfare of others before hers. Bradley Greenwald has great fun playing the wicked Captain Johnny Johne, who, despite his murderous nature, would have preferred pursuing a dancing career. His mannerisms are strongly reminiscent of Captain Hector Barbossa from the Pirates of the Caribbean movies. Three of the other youth performers are also standouts: Haden Cadiz as the crew member who raised the philosophical question of how can you have a leader without creating a tyrant, Dot McDonald as Mhina the crew member who wants to be captain, and Emilee Hassanzadeh as the Irish lass who is trying to make everyone happy.

A quartet made up of Victor Zupanc, Joe Cruz, Dick Hensold, and Gabe Dale-Gau ably play Ellen Maddow’s Celtic music and their sounds were very prominent during the last half of the show. If more musical numbers could be integrated into the first part of the show it would definitely lighten the first half. Joel Sass’s set design of a giant, stage-filling ship is awesome, but its size limits the range of movement on stage, which at times becomes tedious.

Under Peter C. Brosius’s direction the show starts out slow, but the pace picks up once the crew discards Johne and the music plays a more prominent role. I can’t recommend this show to younger children because of the repeated threats of murder in the beginning, but pre-teen children should enjoy it and the second half of the show is definitely worth waiting for.