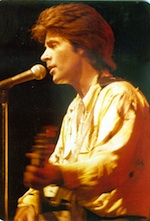 Please join us at noon on Wednesday, August 25 for our Brown Bag Lunch at the East Lake Public Library, 2727 E. Lake St., Minneapolis, with Star Tribune restaurant critic Rick Nelson. (Okay, that’s a different Rick Nelson in the photo. Rick the critic doesn’t allow his picture to be published because he tries to remain incognito when he visits restaurants.)

Rick has been a restaurant critic and food writer at the Minneapolis Star Tribune since 1998. He was a restaurant critic at the Twin Cities Reader from 1993 to 1997 and a food writer at the St. Paul Pioneer Press from 1997 to 1998. He holds a bachelor’s degree in history and a master’s degree in business administration from the University of Minnesota and lives in St. Paul with his partner Robert Davidian.

Twin Cities Media Alliance’s monthly Brown Bag Lunches are your chance for casual conversation with some of the Twin Cities’ most insightful journalists (and journalists from around the world) — about journalism, politics, or whatever is on your mind.