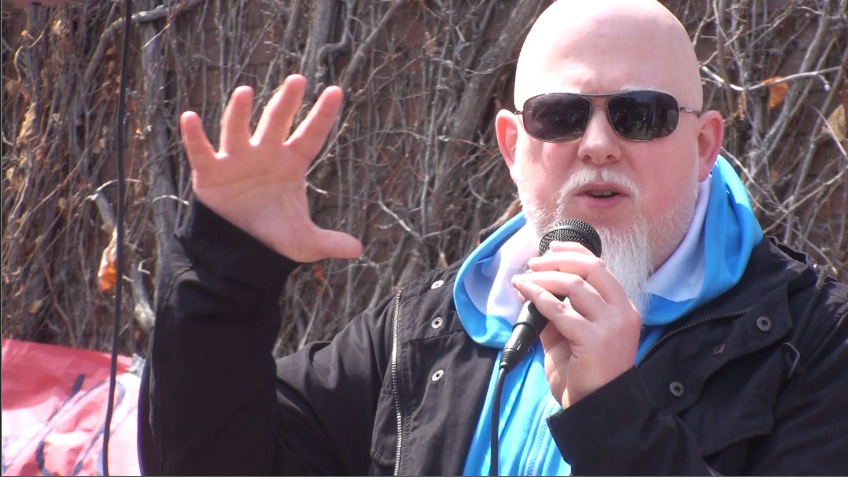 Minnesota-based hip hop artist, Brother Ali, made an impromptu visit to a group of student activists protesting the administration’s relationship with Wells Fargo bank on Wednesday. Brother Ali, who continues to be active in the Occupy Homes MN movement, spoke to the students on the steps of Weyerhaeuser, Macalester College’s administrative building.

The contingent of student protesters is associated with Occupy Homes MN and opposes the college’s partnership with Wells Fargo due to the bank’s foreclosure practices. The students launched a sit-in earlier this week, occupying the administrative building since 10 a.m., Tuesday.

He added, “Students were the bulk of energy in the civil rights movement; students ended the war in Vietnam effectively; students have done a whole lot throughout time, and so this is a part of a legacy that you’re adding onto.”

The student group brought their grievances to the attention of the administration months ago, beginning a yearlong dialogue about potential divestment from Wells Fargo and a reallocation of funds to a community bank. Dissatisfied with the pace of reform, the students issued a deadline to the administration for a final decision to be announced on Thursday, April 18.

In response to the demands Macalester CFO, David Wheaton and Assistant Vice President for Finance, Kate Walker released a memo on behalf of the administration describing in detail their reasons for maintaining their business with Wells Fargo. While accurate data is difficult to access, they acknowledged that Wells Fargo may be the biggest forecloser in the state of Minnesota, but added that this may be a factor of Wells Fargo’s large market share, as opposed to a matter of aggressive policies particular to the bank.

The memo noted that 70% of Wells Fargo’s mortgages are owned by Fannie Mae and Freddie Mac, and that those institutions are responsible for setting policy regarding foreclosure. Also mentioned was Wells Fargo’s charitable giving to Habitat for Humanity.

Students, however, remain resolved that the administration “cut the contract” with Wells Fargo and continue to occupy the administrative building in hopes of intercepting Macalester’s President, Brian Rosenberg and starting another conversation.

Brother Ali encouraged the students to maintain stamina, asserting that, from a historical perspective, positive reform movements had been the result of “a group of sincere, genuine people who were willing to sacrifice and stood together and forced those things to happen.”