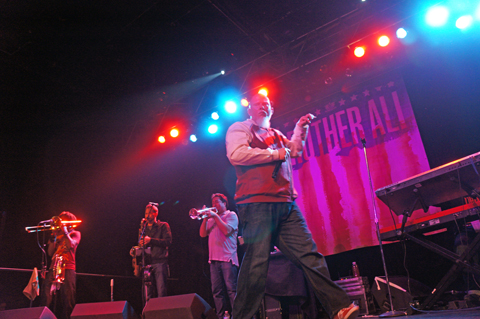 October 5th was cold. White knuckle cold. So I pulled on my gloves, and with dinner breaking down in my gut, I coasted over I-94 and onto East 15th Street, minding an uncertain taxi, before torquing the remaining mile to a sold-out First Avenue buzzing with hip-hop faithful there to see hometown headliner Brother Ali.

I write that breathless sentence as if my lungs still prickled with the crystalline spurs of cold fall air and legs pumping madly and the wrenched chest that comes from knowing there’s a ticket waiting at will call for the night’s hottest show in town.

The opening and married duo, The ReMINDers, stirred cheers and dancing with a style and delivery that Wyclef and Lauren might’ve sounded like had they made a go together.

Often backed by dancehall and reggae beats, Big Samir brought intuited cadence and rhythm to Aja Black’s soulful vocals. Theirs is a conscious sound with lyrics both introspective and engaged with the world around them, at one point cribbing a line from Shel Silverstein’s “Listen to the Mustn’ts,” “Anything can happen, baby, anything can be.” But of the headliner, Aja Black said, “Brother Ali’s saying what everyone’s thinking, but afraid to say.” Kindred spirits indeed.

I stand by my tweet, “Y’all @thereminders just finished and killed the sold out @FirstAvenue They are a hip hop act to spend your next paycheck on.”

The second act, Homeboy Sandman, was a disappointment. Sandman never transcended the solid jazzy and old school beats that supported him—even the deft sample from DJ Kool’s “Let Me Clear My Throat.”

It’s a problem I have with his studio work, too. His characteristic flat delivery coupled with his pacing the stage and his insistence that the crowd “get loud” came across as an emcee frustrated, self-involved, and aloof. Two-thirds through his set, Sandman addressed his perceived inarticulate flow, blaming technical difficulties. While his mic flickered for part of a song—he quickly switched mics—understanding his words was difficult throughout his set. More than the other two acts or his studio work. This all fed my sense that the show wasn’t at the forefront of his mind.

But Brother Ali. He packed the place. He whipped the crowd into a fury. And delivered.

Brother Ali stepped on stage to music from a full band—trombone, tenor sax, trumpet, guitar, bass, etc.—music that might herald a prizefighter or prophet.

From the first beat the crowd churned as a sea of nodding heads crashing against the stage. With the triumphant and horn-soaked “The Preacher” the people-sea broke and waving hands turned to breakers slapping across First Avenue’s lower level.

Notable moments came with Ali dropping the mic to play synth drums and then recreating his music video to the stinging “Mourning in America.” Veiled women marched out and danced to Ali’s staccato and politically provocative lyrics. “It’s a very thin live between a soldier and a terrorist,” he spit.

The crowd moved to Ali’s tracks from the new Mourning in America and Dreaming in Color, but what drew the biggest explosion was “Blah Blah Blah” from Shadows On the Sun when Slug of Atmosphere came out and told us all that “Lookin’ at me like they know me/Only bout as far as their drunk ass can throw me.” It created levity and a moment to reflect upon Ali’s songs not only as prophetic insight, but as damn good music. Party jams. Jams to rock to with friends. Or whoever’s sweating next to you.

From there, Brother Ali played to the close and kept hands waving through air and feet slamming on ground—like each song was the most important thing in the world.

In that final run I finished my Nordeast tallboy in a crystalizing contemplation—about music, about hip-hop, about citizenship.