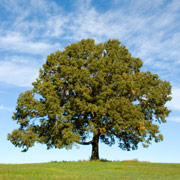 When European settlers first arrived in Minnesota, they encountered one of the largest expanses of oak savanna in North America. Natural prairie fires and fires controlled by Native American tribes cleared competing undergrowth and trees, leaving only the fire-resistant oaks and prairie grasses in a beautifully open and park-like landscape.

As a transition between prairie and forest, oak savannas provided habitat for hundreds of animals and plants and formed one of the most diverse ecosystems in the Midwest. Unfortunately, this unique landscape rapidly disappeared as early settlers cleared the land for housing, grazing, and farmland. Only .01% of oak savannas remain, making it the rarest ecosystem in the United States.

Of the oak savannas that do survive, many are in danger from invasive species like buckthorn and from developers who don’t recognize that the plants in front of the bulldozer could represent the last of their kind in the world.

Groups like the Belwin Conservancy in the St. Croix Valley currently work to restore oak savannas on a large scale. However, big projects like these cannot detract from the importance of restoring this rare and beautiful ecosystem in suburban and urban areas. As little as half an acre is required to restore an oak savanna if open-grown oaks are present, and the educational, environmental, and economic benefits of restoration are often highest in residential and developed areas.

Schools and communities that restore oak savannas provide invaluable educational opportunities to students and residents. By participating in the restoration process, children learn about the detriments of invasive species, the importance and characteristics of native ecosystems, and the opportunities for environmentally-friendly development. The restored oak savanna also lends itself to lessons about the land’s historical and cultural significance.

While removing invasive species is costly and time-consuming, restoration provides several economic benefits. First, the native plants provide a cheap alternative to current methods of cleaning the water supply and fighting erosion. Second, oak savannas require little maintenance once established, and could save the government and homeowners on weeding, watering, and fertilizer expenses. Free-standing oaks also increase property value relative to their buckthorn-choked counterparts. Community value rises as well, due to the recreational opportunities and aesthetic pleasures oak savannas provide.

In March 2010, the Senate stopped a bill that would have allowed cities to require buckthorn removal. While such legislation would surely benefit oak savanna restoration efforts, cities and homeowners should move forward even without buckthorn bans. Cities can modify lawn and boulevard ordinances to allow businesses and residents to grow the taller native plants on their lots; Minneapolis considered such a change last August. School districts, city parks, and homeowners can also work to identify open-growth oaks on their property and involve volunteers in community and private restoration projects.

For its educational, environmental, and economic health, Minnesota must promote smart development that incorporates native ecosystems like the endangered oak savanna.