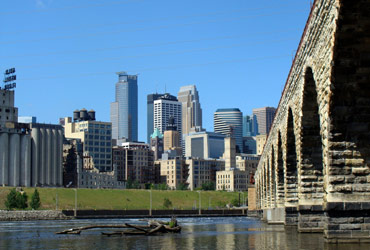 Local advocates for cooperatives are celebrating signs that momentum is gaining for legislation that gives cooperative business development a boost in urban and underserved communities like existing programs that serve rural areas.

Rep. Keith Ellison (DFL-Minn.) of Minneapolis was among four members of Congress in January to sign on as co-sponsors of a National Cooperative Development Act.

This bill has about a dozen sponsors so far. It is expected to gain strength through the coming year, however, as cooperatives and their trade associations participate in promotional events surrounding the United Nations-declared International Year of Cooperatives.

“What we would like to see are more programs in underserved communities that operate like successful co-op development programs from (U.S. Department of Agriculture) Rural Development,” said Madeline Kastler, president of the board for the Seward Co-op Grocery & Deli in Minneapolis.

USDA Rural Development is restricted to assisting cooperative development work in rural areas and small, rural cities. Separately, USDA works with rural electric and other rural utilities co-ops on development project as well, and they, too, are mostly in rural areas or in formerly rural and underserved communities when the co-ops were started.

For these reasons, the proposed federal legislation would create a National Development Center for Cooperatives within the U.S. Department of Housing and Urban Development, said Peter Frank, a Philadelphia co-op developer who is serving as the lead advocate for the bill.

It wouldn’t create a new bureaucracy, he said in an interview. Rather, the HUD program would work through existing co-op development centers, such as Cooperative Development Services (CDS) that is led by developer Kevin Edberg in St. Paul.

Minnesota has taken a step forward in co-op development within the past year with a USDA grant to the Agricultural Utilization and Research Institute (AURI) to form a co-op development center to help entrepreneurs start and expand co-ops. These efforts, too, are limited to AURI’s mission that builds on our agricultural resources, said Seward’s Kastler.

Recognizing these constraints nationwide, the Cooperation Works! network of co-op development centers is the primary advocate of the new federal legislation. AURI and Edberg’s CDS are members of the network.

In a 2011 report, “Cooperatively Moving Minnesota Forward,” Minnesota 2020 playfully asked people in the Twin Cities and in underserved communities to ponder entrepreneurial opportunities and then ask themselves, “What would farmers do?”

Four of the nation’s 10 largest cooperatives are Minnesota-based firms, according to the National Cooperative Bank’s annual rankings for 2011. Farmer-owned CHS Inc. of Inver Grove Heights and Land O’Lakes, of Arden Hills, were the two largest in generating revenue; AgriBank FCB in St. Paul was eighth, and HealthPartners, based in Bloomington was 10th and the largest co-op health care system.

The Cooperation Works! network cites vivid examples across the nation that haven’t been adapted to meet needs in Minnesota. Two such examples deal with health care and health care services in neighboring states.

One is Cooperative Care at Wautoma, Wis., in which therapists and other home-care service providers assist the elderly and disabled with home care. By being members of this 50-person co-op, these health care providers can themselves form a pool to acquire affordable health insurance for themselves and their families, and the employment they create for themselves meets banking needs for predictable income for home mortgages.

Another is the Wilson Health Planning Collaborative that provides an integrated health system for 11 rural counties and the Fort Berthold Indian Reservation in North Dakota.

Still other examples are the TULIP Credit Union at Olympia, Wash., which was established to provide financial services to a low-income, underserved community; and WAGES, the Oakland, Calif., green cleaning business that has increased worker-owner incomes by 50 percent through business growth and profit distribution, and the co-op can provide health care in an industry where such benefits are rare.

Minnesota does have a smattering of employee-owned enterprises that are co-ops in spirit if not in legal standing from their articles of incorporation. Still, the numbers of such enterprises are small for a state that resembles Canada and Northern European countries for use of co-op business models.

The National Cooperative Development Act would help channel expertise from past co-op development successes to work with urban and underserved communities that have less and, in some cases, no past experience with cooperatives. The bill, however, faces obstacles.

One of the many things underserved communities have in common is this: They don’t operate Super PACS.