Housing affordability is not only central to Minnesotans’ economic stability—it’s often a family’s largest expense—but a place to live is also a fundamental part of human dignity. Unfortunately, housing is still costly for too many Minnesotans.

Average rents in the Twin Cities are up 8.5% over three years, Minnesota Housing Partnership reports, which is faster than the rate of inflation. And rents are likely to continue increasing in the near future. During the second quarter of 2013, there was only a 2% vacancy rate for Twin Cities rental housing below $1000 a month.

According to 2012 U.S. Census Bureau data analyzed at Minnesota Compass, a significant number of Minnesota households are still cost-burdened by housing, having to devote 30% or more of their income to housing last year. Statewide, 29.7% of all households were cost-burdened, which is troubling enough, but renters and lower-income groups are strikingly more cost-burdened.

The federal Department of Housing and Urban Development sets a benchmark maximum rent level for households whose rent payments it supports, called the Fair Market Rent, and uses that to help calculate its contributions. For a two-bedroom apartment in Minnesota, the Fair Market Rent level in 2013 is $836 a month. To afford that without help, at no more than 30% of household income–a percentage which is already too much pressure on renters–a household needs to make at least $33,438 a year, which is just out of reach for two workers on only minimum-wage incomes for 40 hours a week, 52 weeks a year. 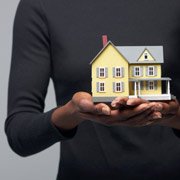 Since a decent place to live is falling out of the grasp of too many Minnesotans, we need to do what’s necessary to help bring it back into their reach. Raising the minimum wage is one clear and direct way to make housing more affordable, which makes Minnesota a more equitable place to live and gives Minnesotans the stability they need to drive our economy.