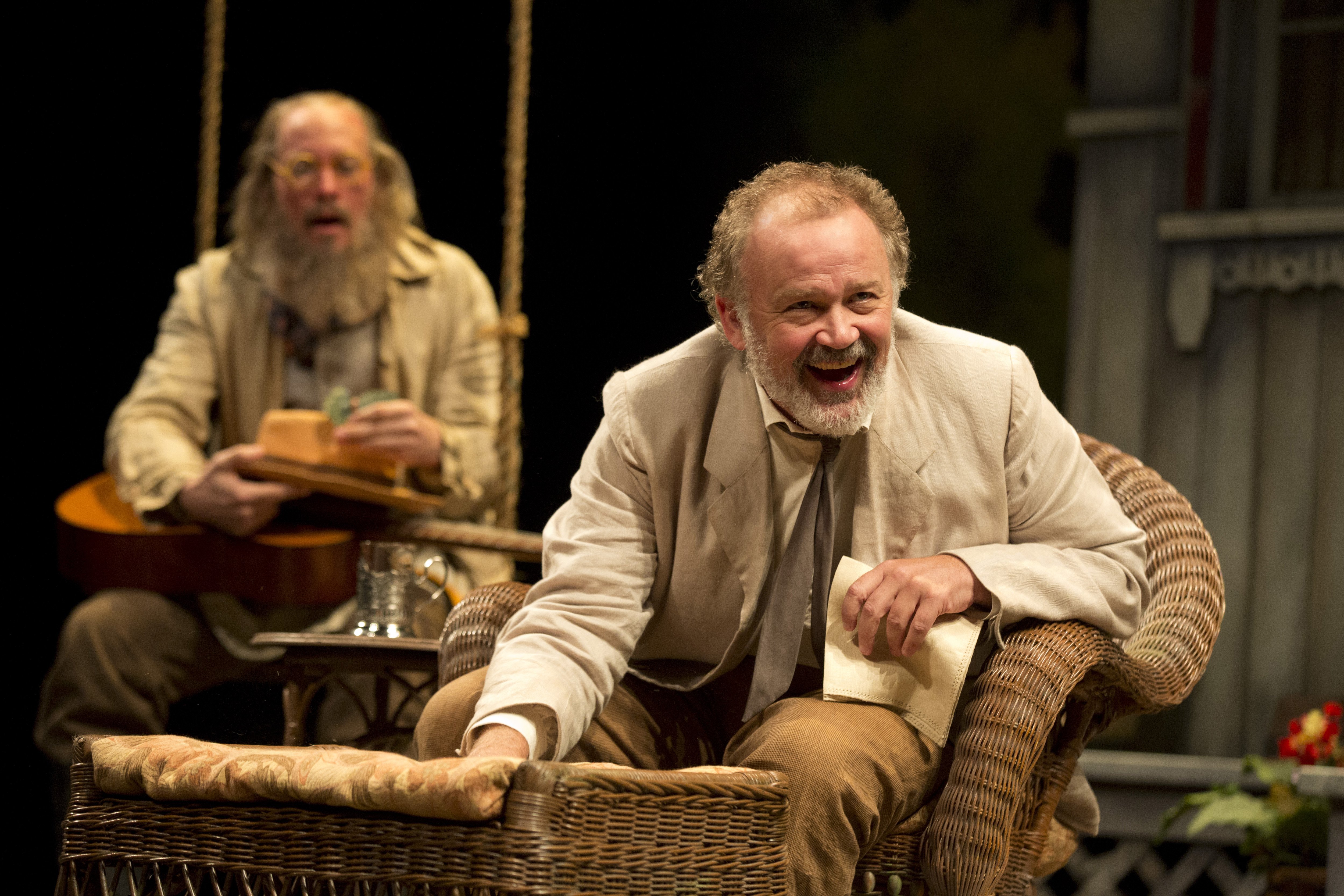 Why a version of Chekhov’s 1897 Uncle Vanya by the Irish playwright Brian Friel? First, the play’s director, Joe Dowling, acknowledges Friel (1929-) as his greatest mentor. Dowling is one of the few masterly directors of Friel’s canon. He first directed the world premiere of Living Quarters at the Abbey Theatre (Ireland’s National Theatre) in Dublin in 1977, but has always stated that the production of Philadelphia, Here I Come! presented at the Dublin Theatre Festival in 1964 made him commit to theater as a career. Friel, in turn, was first fully immersed in the comic pathos of Chekhov when he observed Tyrone Guthrie’s (1900-1971) rehearsal of The Three Sisters in the inaugural season of the Guthrie Theater in 1963.

The resonances don’t end there. Guthrie revealed the comedic pain of Chekhov for a previously resistant and bewildered British audience with his 1933-34 Old Vic season’s production of The Cherry Orchard in a translation by his brother-in-law, Hubert Butler. Alec Guinness thought it one of Guthrie’s finest productions. It released Chekhov from the dull and stilted productions that had preceded it and illuminated the melancholy humor pervading the characters’ relationships. Guthrie’s family home was itself a very Chekhovian remote country house lost in the obscure drumlins of Ireland’s county Monaghan. The last production that Guthrie directed for his Minneapolis theater was Uncle Vanya in 1969. This living line of connection is vitally important as it undergirds the zest of the current production. Friel is frequently designated the Irish Chekhov because his dramas follow Chekhov in avoiding the heroic. His plays are full of frustrated fantasists and ineffectual dreamers. Ireland, as the Irish novelist, George Moore, stated is “a little Russia.” Why? The critic, Richard Pine, acknowledges that both countries, particularly in the nineteenth century, were rural, impoverished, and filled with vast “serf” populations released into emancipation in 1829 (Catholic Emancipation) and 1861 (Emancipation of the serfs), yet “behind them lies a psychological terrain of hope and longing…wonder, sadness, exhaustion and irony.”

So as the Guthrie Theater turns the clock into its first production of its 51st season, it is entirely appropriate that the first play acknowledges a continuity between Dowling through Friel and back to Guthrie and even further back to Chekhov himself. Anton Chekhov (1860-1904) was both a Russian writer and a medical doctor—he graduated from Moscow University in 1884. The combination is instructive because his plays provide a diagnosis of a spiritual disease. Rather like Siddharta Guatama, Chekhov offers a diagnosis of the disease of misunderstanding what life is really about. “All life is suffering” could be equally a statement of the Buddha or Chekhov. This assertive diagnosis by the doctor precedes a much more tentative and elusive remedy and cure that is framed as a question by the artist. The cure/question could be stated as follows: can you lighten the frustration, depression, and painful heartbreak and soulbreak of life’s everyday routines with a comic and subtly ironic pathos, suggests Doctor Chekhov, and perhaps then you may soon accommodate yourself to the thousand natural shocks that flesh is heir to? The artist presents the diagnosis as a much more elusive question that an audience has to internalize and answer in their own way.

To offer his diagnosis and tentative remedy Chekhov had to revolutionize theater itself and demand that it not be a false vehicle for heroes. He stated in a letter: “The public demands a hero, a heroine and stage effects. But in life one does not shoot oneself in the head, hang oneself, or declare one’s passion at every fencepost, and one does not pour out profound thoughts in a constant flow. No; mostly one eats, drinks, flirts, makes stupid remarks: that is what should be seen on the stage.” This sense of meticulously mundane realism as characters perform their routine actions “all the time their happiness is taking form, or their lives are being destroyed” clears the way for his main diagnosis depicting how lives are wasted. Vanya realizes that he has falsely squandered his youth providing funds to the vain and self-important Professor Serebryakov, husband of his now deceased sister. When the Professor, now retired, returns to the estate with a young and beautiful wife, Elena, Vanya futilely attempts to spark a romantic involvement with her. Hence, the autumn roses as a symbol of beauty, time’s passing, and love’s impossibility are invoked in this production. Vanya’s appalled realization of his life’s futility and frustration shatters him. He sinks into self contempt. He botches a melodramatic showdown, erupts in volcanic abuse, but can’t escape the constraints of his life. Vanya reverses Thoreau’s quiet desperation. He bursts into brief flaring moments of shouting desperation. The desperation continues.

This production benefits from Dowling’s capacity as an actor-turned-director to excavate the pained humor of both Friel and Chekhov without descending into a welter of cartoonish caricature. Here the groan and the chuckle are held within a healing unity. How? Primarily, the deep affinity and connection between Friel and Dowling shows through in his meticulous and detailed direction, his near invisible showing forth of Friel’s ameliorations to Chekhov’s original. The Irishisms are beautifully modulated to suggest a meandering speech of longing without efficacy. The heightening of the comic figure of “Waffles” (perfectly caught by Jim Lichtscheidl as an ineffectual and harmless innocent permanently astonished by German efficiency even though he lost his wife to a German) provides a careful counterpoint and foreshadowing to the “dip” in fortune of Vanya. Andrew Weems as Vanya paints a tour-de-force portrait of a dutiful relative detonating in disbelief at the void over which he has built his entire life.  Vanya is a huge potential wasted in a little life.

The rest of the cast crackles with actorly intelligence. John Catron layers the energy and charisma of Dr. Astrov with a creeping exhaustion and cynicism making him an increasingly poignant frustrated idealist whose future self must surely be mirrored in Uncle Vanya himself. Ominously, alcohol increasingly conjoins them. Emily Gunyou Halaas (as Sonya) finds the pained disappointment in being wholly invisible as a woman to Dr. Astrov while Valeri Mudek (as Elena) knows her beauty will not provide any release from a merely decorative fate (she is a drone in contrast to Sonya’s worker bee in the imagery of the play).

The diagnosis may be bleak disappointment but the cure is acknowledging its reality. As an audience if we identify with the Astrovs, Vanyas, Sonyas, and Professors in our lives, may we awaken perhaps to a greater compassion and dignity? This is the doctor’s diagnosis and the artist’s tentative question. The audience is left to do the work of applying the cure through witnessing this excellent and meticulously layered production.