“I can be the role model that I’m searching for.”

That was the comment of one participant at the “Intergenerational Retreat,” a two day event that brought Hmong men and women together to discuss gender issues within the family system and in the community to learn to be more intentional about addressing intergenerational conflict.

Two organizations, Hnub Tshiab (New Day) Hmong Women Achieving Together, and Koom Tes (Cooperation) hosted a two day intergenerational retreat for Hmong families in St. Paul on Oct. 11-12, 2014, at Wilder Foundation Center for Social Healing. It was the second event of its kind.

Hnub Tshiab Hmong Women Achieving Together is a Minnesota nonprofit in St. Paul, with a mission to be a catalyst for lasting social, cultural, and institutional change to improve the lives of Hmong women. Koom Tes is a community group of Hmong men who work to empower and inspire Hmong men to exemplify love and respect to improve the quality of life in our community.

Intergenerational conflict is a result of differences in acculturation among first and second generation immigrants. Hmong youth in America have a harder time learning and retaining Hmong language and Hmong cultural practices due to everyday exposure to Western culture.

Parents who wish to maintain cultural practices experience stress over the loss of culture and traditional values seen in their children. Many parents fear that Hmong culture will be lost if children do not work hard to maintain the culture.

The Hmong are a people that have maintained their ethnic identity in the face of war and persecution throughout their history. This history led them from the most northern parts of China to Southeast Asia and now to America. The Hmong culture changed as expatriates resettled as refugees in various countries that also include Canada, Australia, France, and Germany.

Today, these expatriate Hmong communities for the first time have the ability to visit and study with the Hmong in China. The studies show how much the Hmong culture and language has changed outside of the ancient mother country.

Cultural change is inevitable as are gender roles and expectations over time. This is a concern for Hmong of all generations and was especially expressed by the participants of the retreat.

Parents hold onto traditions that say girls must aspire towards marriage and motherhood before they become spinsters, while boys are pressured to care for their aging parents and to pass on the Hmong traditions to their children. On the other hand, second generation children who quickly adopt Western values of gender equality begin to challenge these traditional gender expectations at the chagrin of their parents.

The retreat provided a safe space for parents and their children, men and women, youth and old to tackle these difficult topics. The 20 individual participants included elders who were as receptive as they were instructive in aiding youth in understanding why it is important to hold on to traditions.

The youth in turn helped elders understand the impact of strict traditions on their everyday lives as American children. They spoke of struggling as a result of confining gender expectations.

Men listened to the experiences and hopes of their female counterparts. Women repeated back the experiences of the men in the room. This back and forth, give and take, dynamic and mutual exchanges helped to bridge the generations and the genders.

After the retreat, some of the participants commented:

“I learned about communication with the opposite gender.”

“I can be the role model that I’m searching for.”

“I learned to separate my role and expectations as a Hmong woman and an American woman.”

“It is ok to think outside of the box and challenge norms that don’t work.”

The participants said a longer retreat would offer more opportunities to have conversations with members of the opposite gender in order to understand their experience. Hnub Tshiab Hmong Women Achieving Together and Koom Tes look forward to hosting more Intergenerational Retreat in the future. 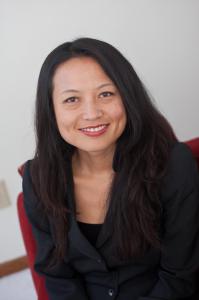 The two day retreat was made possible with funds from St. Paul Foundation and the Wilder Foundation Southeast Asian Program. It would not have been possible without the work of volunteers, Shee Xiong, Ka Yang and Francois Vang.

Dr. Pa Der Vang, Ph.D. (left), is an Assistant Professor of social work at the University of St. Thomas and St. Catherine University.