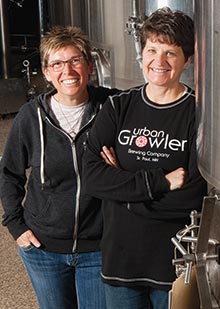 What can happen if you put a go-getter together with a careful planner, add hops and let steep? You might get Urban Growler Brewing Co.

Deb Loch and Jill Pavlak opened Minnesota’s first women-owned and -brewed microbrewery in August. The brewery, tucked into an industrial area of St. Paul’s St. Anthony Park neighborhood, is the product of six years of dreaming, learning and planning.

The women complement each other. When they decided six years ago to start a brewery together, Pavlak wanted to move fast – “I just wanted to throw open a garage door somewhere and start selling.” Loch was more cautious, running numbers – “I was our own worst enemy for quite a while because it took a long time; it took us six years to get open.”

That long journey has culminated in a brewery that’s welcoming to a broad range of people, especially women, who Pavlak and Loch believe have been underserved in the industry.

Flowers, reclaimed wood and beautiful photographs create a comfortable, homey aesthetic in the taproom, and table service and a kitchen mean no waiting in food truck lines. Even the heating system plays a role: “This place is not going to be cold,” promises Pavlak.

Women are experiencing the craft beer boom differently, too. Their roles haven’t kept pace with the industry’s rapid growth, Loch says. But the women hope Urban Growler piques some interest among potential women brewers. Pavlak says a couple of women have contacted them since they opened, asking about getting started and the best ways to build credibility in the industry.

“As it becomes more visible and women and girls know it’s an option, it’s going to become more common,” Loch says. “You do not have to have facial hair to become a brewer.” And Loch is decidedly devoid of facial hair, an anomaly in her Master Brewers Program classes at the University of California, Davis.

Women and men are filling the taproom regularly. Within two weeks of its Aug. 27 grand opening, Urban Growler ran out of growlers. Tables fill on Tuesday and Wednesday nights, and staff members add folding tables for weekend nights. Young families bring the kids on weekend afternoons to eat, relax and play a game of giant Jenga.

The women encourage questions and happily educate their customers about their beers.

“We wanted this to be a place where women, men, whoever, non-craft beer drinkers would not feel intimidated. And ask – there’s no dumb questions,” Pavlak says.

They also want people to be adventurous, try that hoppy/dark/etc. beer that they swear they won’t like. Half pints, 10-ounce pours and tasting flights facilitate sampling and moderate consumption.

Says Loch: “All are welcome to try whatever you’d like, and if you don’t like it, it won’t hurt our feelings. We’ll just give you another to try.”

On the fast track

Bars and restaurants have been clamoring for Urban Growler beers. Distribution was Step 2 of their business plan, but they’re moving more quickly than they had expected, Pavlak says.

Six weeks after opening, branded kegs lined a wall and an assistant brewer was working alongside Loch.

“You need lots of people to make this happen. In general, none of this would’ve happened without a lot of people, a lot of support, a lot of help,” Loch says. “It’s just been a journey of trusting that it’s all going to work out. We kind of always knew that we would be successful; we didn’t know how it was going to happen.”