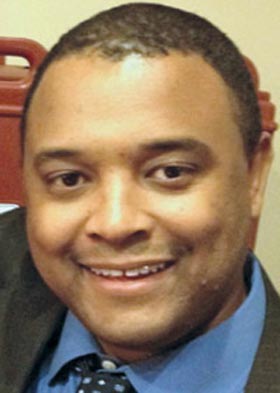 “Close to 40 percent of men 16 to 25 in north Minneapolis are unemployed.” That quote was the answer given by Brett Buckner, when asked why there needed to be a shake-up in 5th ward politics. “How do we prepare the young people to build a career right here in north Minneapolis? When you have that many men not connected and not contributing, it affects everyone,” said Buckner, who is seeking to be the DFL candidate for 5th ward councilman.

Buckner recently held a gathering for supporters at Broadway Pizza, 2025 West River Road N., where he discussed his plans for the district, if elected. According to Buckner, creating jobs is his top priority.

“The issues of North Minneapolis are not isolated to North Minneapolis,” said Buckner, who has lived in the area all of his life, except for when he attended Hampton University in Virginia. “If we’re able to solve these issues, we make for a better society.”

Buckner, who is a third generation Minnesotan, is a graduate of North Community High School. Upon returning from Hampton, Buckner, 41, began working with the Boys and Girls Club of America and later with America’s Promise, the organization founded by Gen. Colin Powell to assist at-risk youth. Buckner was one of 10 state coordinators for the organization. Buckner joined the Minneapolis branch of the NAACP and was elected its president in 2003. He served one term as president, but remained active in the civil rights organization and was awarded its Region Four Man of the Year in 2007. No stranger to politics, Buckner worked as a staffer on Rep. Keith Ellison’s first campaign for the U.S. House and later in 2008 became a campaign field director for Ellison.

Buckner said he is not running to fill an open seat being vacated by current 5th Ward Councilman Don Samuels, who announced he is running for mayor.

“I filed (to run) back in September,” said Buckner. “I was running regardless of what Don Samuels was doing. I’m running because we still haven’t developed our community from an economic standpoint.”

According to Buckner, one example of the lack of economic development in North Minneapolis is the fact that light rail does not have a line that runs through that corridor of the city – in particular along West Broadway. Buckner said he would not have opposed a line along Penn Avenue as well.

“We’ve got to start connecting the dots,” said Buckner. “We’re five minutes for downtown (Minneapolis), but you’d think we were as far away as St. Cloud.”

Buckner said as councilman he would devote efforts to closing the achievement gap among white and non-white students in area public schools. He said the issue is not just an issue for the schools to address.

“City government plays a major roll,” said Buckner. “Ninety-two percent of a child’s time is spent outside of the classroom, so what are we doing during that 92 percent to better facilitate learning and enhance their academic abilities? If we’re saying education is important, we need to show that it is.”

Buckner said he supports an expansion of the city’s STEP-UP program that employs area youth with North Minneapolis businesses. “I’d like to see every business along West Broadway participate in the program,” said Buckner.

Buckner said public safety is also at the forefront of his agenda. He said though encouraged with the approach the Minneapolis police department is taking in its policing of the area, he would like to see greater efforts placed on community engagement and crime prevention.

Buckner said he is excited to take his message to the masses.

“I’m a northsider. I love this place. When the tornado hit, we lost our roof and we could have said we’re moving, but we said we’re staying,” said Buckner. “But we can do better. We have to do better. I’m putting my everything into this.