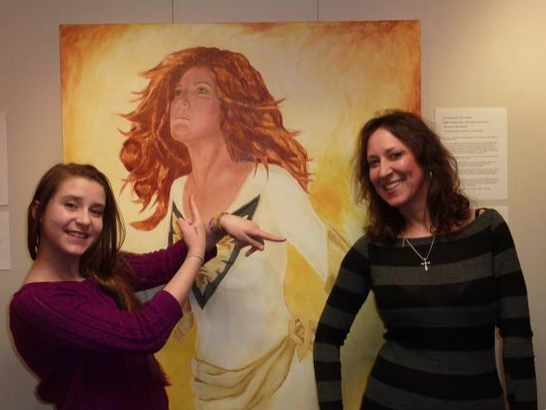 I had never felt more powerless than when I was diagnosed with breast cancer.
My body, this husk that had held me, had betrayed me. While I was blithely going about my business, it was churning out malignant cells.
Cancer consumes so much of your energy; the treatment, yes, but also keeping the scary thoughts at bay. You walk around hoping that you’re one of the Lucky Ones. Even though you’re already an Unlucky One because It got you in the first place.
Cancer can really rob a girl of her sense of humor.  The visual image of the pink ribbon didn’t perk me up much, maybe because its meaning has been co-opted and diluted by Fortune 500 companies to sell products.
While I was pale and bald, the thought occurred to me that breast cancer survivors deserved an updated visual image that better represented our grit. Something powerful, but a little bit playful, too, to counteract the painful, grim slog. The Breast Cancer Superhero Project packs the punch I was seeking.
Minnesota artist Barbara Porwit has painted larger-than-life sized portraits of six local breast cancer survivors, portrayed as their “superhero of choice,” as she puts it. The eye-popping canvases show the women caped for battle, prepared to face their formidable adversary with determination and spirit. The six portraits are on display at Regla de Oro Art Gallery and Fair Trade Gifts (2743 Lyndale Avenue South, Minneapolis) through April 26.
Porwit, an accomplished portrait artist, got the idea for the project a few years ago when, as she puts it, “it seemed like everyone I knew” was diagnosed with breast cancer.
“What could I do? I’m not a priest or a psychologist,” Porwit said. “I felt so helpless.”
Porwit seized on the idea of creating original paintings. To date, she has worked with six breast cancer survivors, collaborating with them one-by-one to choose how each would be portrayed in oil on canvas.
Survivor Katy Stanoch Tessman chose Wonder Woman and wears the heroine’s traditional cape-and-crown in her portrait. Lisa Dahlseid perused from the pages of comics and identified with The Phoenix, a superhero that personifies her vision of conquering cancer.
Survivor Anne Drowe came up with a fanciful and poignant original concept, the “Ruby Runner,” an alter ego whose super power is limitless energy; Drowe’s own energy level has flagged since her diagnosis. Jill Stanton
envisioned herself as “Radiation Diva,” and is shown crossing her hands overhead, with her superhero’s bracelets deflecting cancer bombs.
“It’s really important to me to show images of strong women who’ve been through this,” said Jessica Smith, 45, the owner of Regla de Oro, which is hosting the show. “It inspires all of us.”
Many of Smith’s own relatives have battled breast cancer. Her mother, a 17-year breast cancer survivor, is currently being treated for a gynecological cancer. Through genetic counseling, Smith herself was found to carry the BRCA 2 gene mutation, which gave her an 85 percent lifetime risk of developing breast cancer. She has had preventative surgery that has reduced that risk to 5 percent.
“I’m not a cancer survivor, I’m a pre-vivor,” she said. “I’m part of the first generation that can say such a thing. I see the women in the portraits and I know that if things had gone differently, that could be me.”

When I view the superheroes, I, too, see myself in them. The images challenge me to ask myself what kind of a superhero could I be, what kind of superpowers could I claim. It’s the kind of question that’s fun to think about–and ‘fun’ and ‘breast cancer’ are not words that are usually in the same sentence. There’s a healing magic in seeing these survivors strike their triumphant poses. Usually, breast cancer treatment involves scalpels and needles. No doubt Porwit’s subjects are relieved to be healed by a woman who wields a paintbrush.