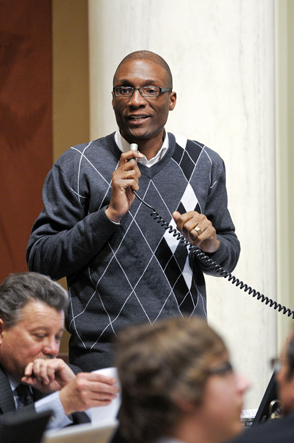 While other candidates hold rallies and black-tie fundraisers, Rep. Bobby Joe Champion’s (DFL-Mpls) secret to getting elected to his North Minneapolis House seat four years ago was through his constituents’ stomachs.

Eggs, sausage, bacon and grits were the secret ingredients to gaining delegates for his first run for public office.

“I called them ‘Breakfast with Bobby.’ I would easily get 100 people to show up,” he said.

He explained the election process for those who came, helping them to understand why and how they should get involved.

“I would say a caucus is just you and your neighbors getting together and deciding who is going to represent you. People call it caucus, but that’s all it is,” he said.

It worked so well, he’s planning on doing it again as a candidate for the Senate seat currently held by Sen. Linda Higgins (DFL-Mpls), who is not seeking re-election.

He hopes the process is a little easier this time.

When he ran for the House in 2008, Champion received the party’s endorsement, but he had a major issue to overcome: the DFL incumbent continued to run against him.

“The caucus did not like me because I was running against an incumbent.” Champion said.

However, his wife, Angela, supported his decision to run, as did U.S. Rep. Keith Ellison, whose campaign Champion had helped.

While many gave him the cold shoulder at the state convention, one House member embraced his desire to serve the North Side.

“There was only one person, which is why I respect her to this very day, who opened her arms and gave me a hug on that day — (Rep.) Mindy Greiling. She saw my humanity, not as a person running for office, but as a human being who was being rejected.”

Throughout his legislative career, Champion has fought to ensure that everyone gets a chance to succeed.

He’s proud of sponsoring the Disadvantaged Business Enterprise law, which certifies a business and enables it to bid for federal-aid highway, mass transit and transportation research and technology projects.

“If we don’t want people on safety net programs, then we have to give them an opportunity by which to contract and be employed,” he said.

That led to the Targeted Group Business Program legislation that would provide incentives to buyers who purchase from a business owned by women, minority groups or persons with disabilities. The bill awaits House action.

“Some people have been off probation 10 or 20 years and don’t know,” he said.

As a candidate for Senate, he seeks to represent North Minneapolis, portions of the downtown district and a sliver of the Bryn Mawr neighborhood to the west. He finds the diversity of the district rewarding.

“I think it’s important for us to engage communities in a way so that we expand their intellectual capacity around the issues, so that we can better represent them,” he said.

For example, after he was elected to the House, he brought House Chief Fiscal Analyst Bill Marx to a community meeting to explain the Legislature’s responsibilities.

“They light up. They become so much more engaged — and now you can all critically analyze issues that affect their quality of life,” said Champion.